A page for all the characters who appear in Atlus' Catherine. BEWARE OF SPOILERS. 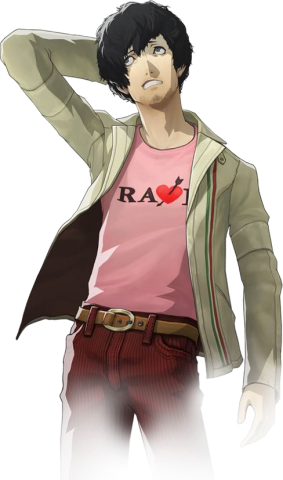 A 32-year-old computer programmer and the protagonist of our story; a fairly unambitious man whose life gets turned around very quickly after his girlfriend Katherine McBride starts to pressure him into getting married, and he is seduced by the mysterious Catherine. At the same time, he's having nightmares where he has to climb towards a cathedral alongside countless other men turned into sheep in order to escape. 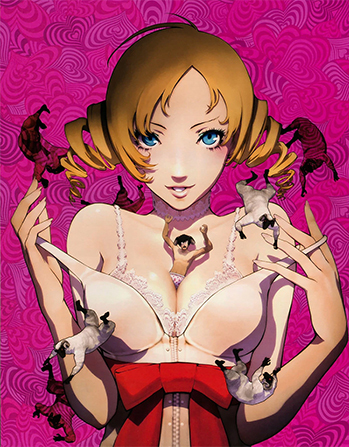 The titular seductress; Catherine seduces Vincent at the Stray Sheep bar and it's after meeting her that his nightmares begin. She is quite the Clingy Jealous Girl and is implied to be more than a little crazy.
Katherine 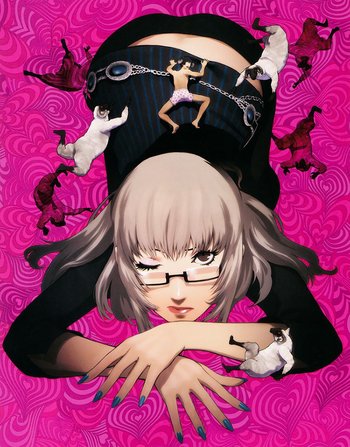 Vincent's girlfriend. They met at a high school reunion and struck up a relationship. She's said to be a career woman, but she also wants to get married. The pressure over whether or not to do so is partially what sets Vincent's story into motion.
Rin 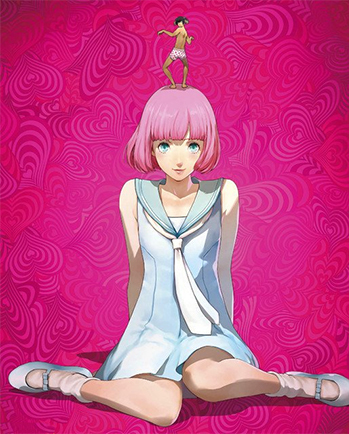 A new character introduced in the Full Body Updated Re-release. Commonly goes by the name "Rin" and is also a pianist hired by Boss to play at the Stray Sheep Bar. Rin serves as a third "Catherine" for Vincent to romance, offering a third option in the Order Versus Chaos exploration of relationships in the game. 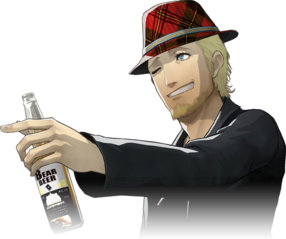 Orlando is one of Vincent's oldest friends and another frequenter of the Stray Sheep bar. He tends to lean towards freedom in everything he does and isn't particularly keen on the idea of marriage.
Jonny 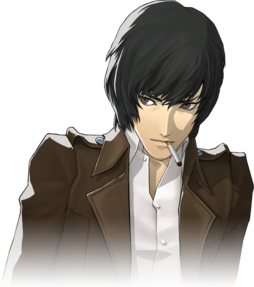 Jonny is another bachelor friend of Vincent's who frequents the bar. A used car salesman who works for his father's company and plans to continue the family business. He tends to lean towards the "order" side of things and has a yearning to find his own soulmate some day.
Toby 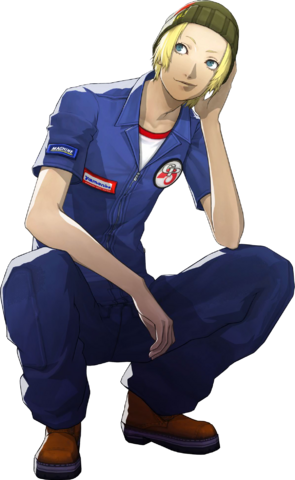 One of Jonny's workmates, Toby is the youngest member of the group and another regular at the bar. He looks up to his coworker and has a similar desire to find "the one" and get married. He's also quite the cake eater and has a huge crush on Erica.
Erica 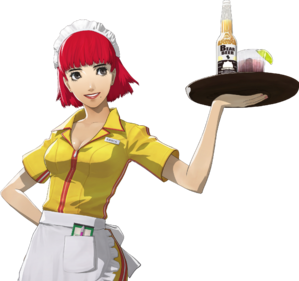 A waitress at the Stray Sheep bar and a childhood friend of Vincent's. She is bright, cheerful, and a little bit of a gossiper. She seems well aware of Tobias' crush on her and it's hinted that she reciprocates it on some level.
Advertisement: 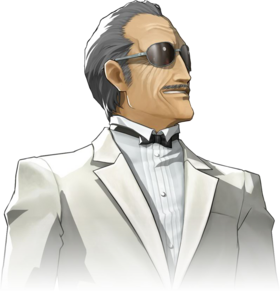 The Boss is the barkeeper of the Stray Sheep bar, who always wears sunglasses indoors. Very little is known about him, although there are plenty of weird rumors surrounding him.
Justin

One of the regulars at the Stray Sheep. He's a reporter, and is studying the mysterious deaths of young men in their sleep. During the Nightmare stages, he appears as the Sheep with Glasses, teaching climbing techniques that Vincent may find useful.

A businessman that frequents the Stray Sheep. He appears in the Nightmare as the Sheep with Regent Hair.

Todd's employee, often seen with him at the Stray Sheep. In the Nightmare stages, he's the Long-Haired Sheep.

One of Vincent's old classmates, and the heir to a huge corporation. He's seen as the Sheep with Sunglasses in Nightmares.

A widowed police officer who can be found at the Stray Sheep. Also known as the Sheep with Police Hat.

Daniel's girlfriend, who occasionally accompanies him to the Stray Sheep. 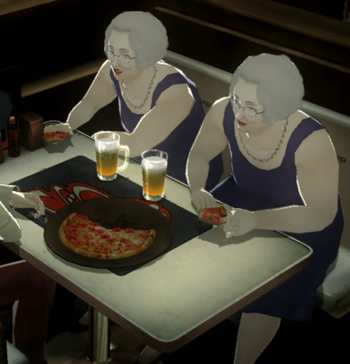 A pair of old women who seem to know about the Nightmare world.

"The (boss name) has appeared. It's the killer. Do not die." 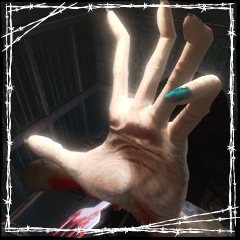 The first boss Vincent goes up against at the end of the Prison of Despair, the Fist of Grudge is a pair of twisted female arms with silver hair wrapped around each one, cracked blue nails, and wielding a giant bloodstained dessert fork as a weapon. She represents Vincent's fear of committing to Katherine and losing his personal freedom, which is echoed in her lines that focus on entrapment. 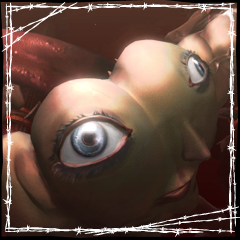 The boss of the Torture Chamber, the Immoral Beast takes the form of a grotesque mishmash of four limbs, facial features, a large mouth with sharp teeth and elongated tongue, and presumably buttocks, altogether vaguely resembling the shape of a heart. An overtly sexualized creature with a female face (that has Catherine's blue eyes), this boss represents the affair that Vincent commits the night before with Catherine, as well as his feelings of guilt over it. 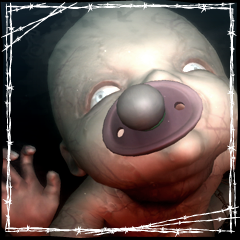 The boss of the Inquisition, The Child is an undead baby symbolizing Vincent's fear of having a child of his own (due to the fact that he's seriously not ready to be a father yet), which is raised when Katherine tells him the day before that she may be pregnant. To Vincent, this Child exists to crush his freedom and life, chaining him to something he isn't ready for yet. 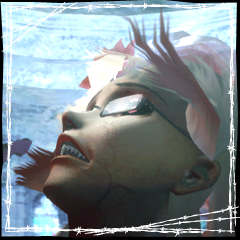 The boss of the Quadrangle and the second time Katherine appears in the Nightmares as one of Vincent's fears, Doom's Bride is a nude, emaciated, demonic version of Katherine wearing a wedding veil and wielding a cake knife. She represents the absolute certainty of marriage that Vincent is facing, feeling that all of his freedom has escaped, and that he has no choice but to marry the woman who is carrying his child. This monster also seems to be aware of the fact that Vincent is cheating, and verbally torments him over it. Thus, this monster also represents his fear of Katherine discovering the affair.

Child With a Chainsaw 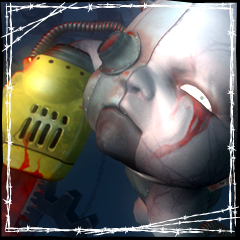 The boss of the Clock Tower, The Child returns to Vincent's fears with disturbing modifications: a chainsaw for an arm, a pincer for the other arm, and a gatling gun in its mouth. The symbolism of the baby on the outside mixed with the grotesque inhuman construction lurking underneath represents Vincent's fear that the child Katherine is carrying may belong to another man, Steve Delhomme. 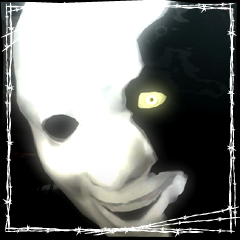 "There's no point in repenting now!"

The boss of the Spiral Corridor. A giant version of Vincent Brooks clad completely in shadow, wearing a gleaming white mask that covers its entire face in a twisted smile. Only his yellow left eye is visible in the beginning. The Shadow of Vincent is the culmination of everything that Vincent is feeling, but is completely ashamed of: his obsession with not being tied down, even at the expense of the most important person in his life, of not taking responsibility for anything in his life, and of cheating. Though he is able to hide his feelings behind a mask, the higher he climbs, the more the mask breaks away. 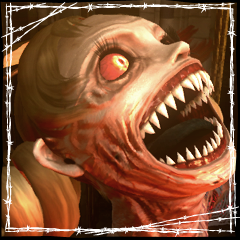 For tropes regarding her, see her entry in The Catherines. 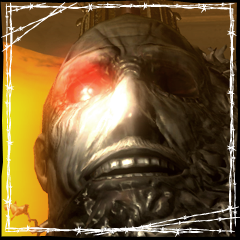 "I swear on the name of Dumuzid, the Shepherd, consort of Ishtar! Your ass is mine, punk! Prepare yourself!"

For tropes regarding him, see his entry in Stray Sheep Characters.

"Sinner... Prepare to face our judgement."

A seemingly divine being that is the big brother of Rin. Despite what it may seem though, they are not an actual archangel. They are in fact, a group of pink, diminutive aliens. 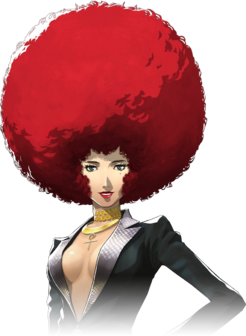 The hostess of the Golden Playhouse, the Framing Device for our story. She provides opening and ending narration to the events of the story.
Paul

A former classmate of Vincent's, and one of the first men claimed by the curse.

A sheep who appears on the Landings, selling useful items in exchange for Enigma Coins, which can be collected during stages or awarded at their end. Their primary purpose is as a scoring mechanic, but the Merchant Sheep believes that if he can collect enough, he can use them to buy his freedom.

A sheep only appearing in Full Body, named for his golden suit. A very rich man in real life. His real name is Abul Bahril.

A sheep only appearing in Full Body, named for his scarf. A former musician and a cook for the Stray Sheep. His real name is Roderick Lockhart.

A man who accuses Vincent of stealing Catherine from him.

The various men who've been forced to climb the Tower. To everyone else in the Nightmare, they appear as sheep. This section is for the unnamed, undistinguished sheep populating the nightmares. All of them were brought there due to some issues with women, most often infidelity. They will occasionally climb on the same level as Vincent, where they are obstacles since two people can't be on one block at the same time.

A strange voice that frequently tests Vincent's beliefs in the nightmares and asks him questions from the window of a confession booth before each level. 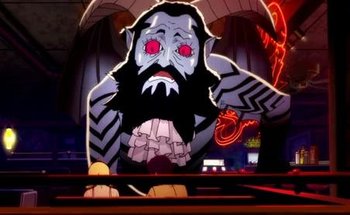 Catherine's father, the plenipotentiary of the netherworld. Despite what that may imply, he's actually more of a bumbling dad than anything else.