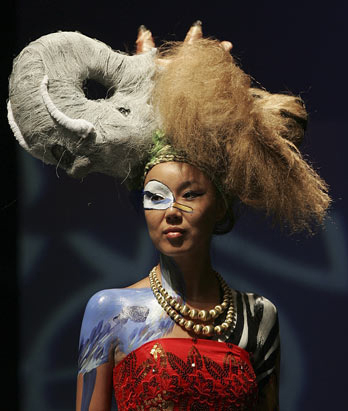 Needs more moose.
"And Kate... Harmony Hairspray, anyone?"
— AlMiles of The Doctor Who Forum on Robin Hood
Advertisement:

A very mild relative of Anime Hair, related to Wakeup Makeup, that declines in two variations: anachronistic and maintenance.

Anachronistic improbable hairstyle has to do with hairstyles that are very much unlikely, and yet go unnoticed, or would simply be difficult to maintain in the time period, for lack of necessary material. Basically, it makes you say "How is that even possible!?".

Maintenance-improbable hairstyle are hairstyles that are uncannily maintained while stranded on islands, planets, the past, spaceships... despite the lack of any hairstylist access. Like dreadlocks — styled dreadlocks require regular maintenance.

May sometimes be because of the Rule of Sexy, or because the hair has actual magic properties.