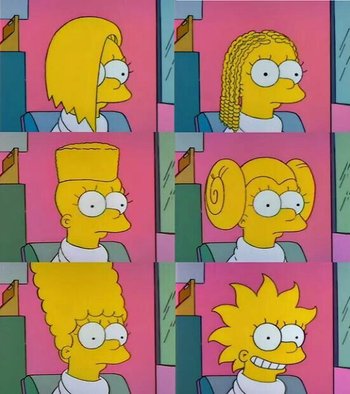 The result of one visit to the hairdresser. Or not?
Advertisement:

Even the most talented hairdresser is not a magician. Hair grows slowly, on average something like half an inch a month, so as a general rule, anytime a person goes for a change in style involving cutting or chemically altering the structure of (permanently coloring, perming or chemically straightening) the hair, they will have to live with that change as long as it takes for the hair to grow out. True, some procedures may be "reversible" (for example, a change in hair color), but this can involve spending time and money on further chemical treatments that can damage the hair, especially if not done by a skilled professional or if the hair has been chemically treated multiple times, and it may be difficult to get the result to look exactly as before. The only way for a hairdresser to "restore" length is to add hair extensions, which involves attaching a foreign object to one's own hair and brings with it problems of its own. Even a completely reversible new hairstyle, such as an elaborate updo, will likely involve a significant amount of styling and product; consequently, undoing it — and perhaps subsequently trying out a different one — may also take a bit of work.

But for some reason, this rule does not seem to apply to our character's visit to the hairdresser's. In a rapid sequence and likely through what seems suspiciously like sleight-of-hand, a series of hairstyles will emerge on his or her head that seem to alternate between longer and shorter lengths and will certainly show changes that in the real world cannot be achieved through simple use of a comb. No magic will be involvednote though one might see tools used that are not normally used in the hairdressing industry; alternately, standard hairdressing tools may be shown to be significantly more potent than in real life; the various styles will all be achieved through the hairdresser's art, as if the hair itself were made of Plasticine. In the end, the character may even end up with the same style as he or she started with, because Status Quo Is God.

This trope is generally played for laughs and tends to be confined to animation or other non-live-action media. Typically, it will be a gag that gives viewers the chance to see how a main character would look with a series of different hairstyles. Compare Costume-Test Montage, Magic Plastic Surgery, Makeover Montage, and Rapid Hair Growth. May overlap with any number of the following: Anime Hair, Hair Reboot, or Improbable Hairstyle.