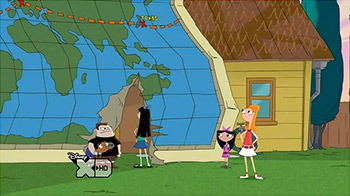 And to think all of this was unfolded from a normal sized brochure.
Barnacle Boy: Drive? What do you know about driving the Invisible Boatmobile?
SpongeBob: Tons. Like the windshield wipers are right here. [pushes a button]
Barnacle Boy: Don't touch that button, that's the... [folds into origami swan] ... Origami Button.
— SpongeBob SquarePants

In some works, a character will pull out a small piece of paper or metal, which will then unfold to an object many times its original size. In others, a large object will fold itself up into a smaller one. Either way, the object becomes much smaller than is at all reasonable (and may also change mass accordingly) through folding.

A subtrope of Hammerspace and Toon Physics, and a supertrope of Telescoping Robot. May overlap with Transforming Mecha, Bag of Holding, Swiss Army Weapon. or Retractable Weapon. Fold-Spindle Mutilation does this (messily) to a person.