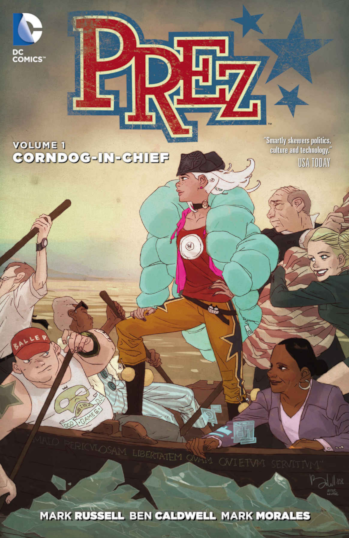 Prez is a comic book series published by DC Comics. It debuted in 2015 as part of the DC YOU line, and was created by writer Mark Russell and artists Ben Caldwell and Mark Morales. It is a re-envisioning of the short-lived 1970s series of the same name.

The year is 2036, and America is dominated by vested corporate interests and shallow social media. Beth Ross is a teenager in a dead-end fast food job who, during her fifteen minutes of social media stardom ignited by a viral video, becomes a popular write-in candidate for the Presidential election. The two major parties' maneuverings to knock each other out of the race work a little too well, and to the horror of everyone, including Beth herself, Beth wins the election. Now she has to figure out how to steer America in a better direction while fending off attacks from Washington's entrenched political elite, led by Senator Thorn, and the nation's corporate string-pullers, led by the CEO of Smiley Industries.

The first six-issue miniseries ran from 2015-2016, with a trade paperback collection titled Prez: Corndog in Chief. A second miniseries was rescheduled several times before being canceled entirely.