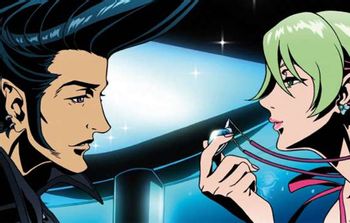 JP and Sonoshee McLaren
Someone's havin' doubts, huh? Hell, I'm just trying to keep this thing interesting. You can't write me off like that. You're just a voice, pal! YOU DON'T KNOW A DAMN THING ABOUT RACING!
— JP
Advertisement:

Set in the far future, REDLINE is about the galaxy's biggest and deadliest illegal road race, only held every five years at a secret location not unveiled until practically the last minute. Naturally, everyone wants to take part, but to do so they have to qualify in one of the Yellowline races first. One such racer, Sweet JP, almost achieves it. Unfortunately, his prized yellow machine TRANSAM 20000 suddenly "malfunctions" just short of the finish line.

Waking up in hospital with an arm and a leg in casts and his dreams in tatters, JP is shocked to find he has in fact made the grade. It turns out the venue has been announced: the fascistic, authoritarian military superpower state of Roboworld, who aren't exactly pleased about their world being used as an impromptu racetrack and make it perfectly clear that they intend to stop the racers with extreme prejudice before the starting flag has even been dropped. As a result, two racers have already dropped out, and JP is voted in through a popularity contest.

The directorial debut feature of Takeshi Koike, produced by Madhouse Studios and released in 2010 after spending half a decade in development, REDLINE is a racer movie unlike anything seen before and potentially one of the most daring and important anime movies of the decade. Visually, it's easy to see that Koike is a huge fan of western graphic art, and has been influenced as much by French comic artist Mœbius, the US animated film Heavy Metal, cult UK sci-fi comic 2000 AD and Star Wars as much as he has by the likes of Katsuhiro Otomo, Hiroyuki Imaishi or Leiji Matsumoto. Not that REDLINE feels or looks like a mash-up of different styles – somewhere in the visual chaos it unrelentingly throws at its audience it becomes something that is far more than the mere sum of parts, a unique piece of animation that at times doesn't even feel like anime in the traditional sense. It was also drawn - by hand - over the course of seven years.

Check out the totally sweet trailer.

As of late December 2011 it has been released on Bluray and DVD in the US and UK. It was dubbed and released under Manga Entertainment.