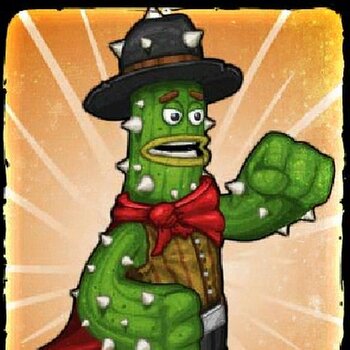 Cactus McCoy and the Curse of Thorns is a 2D Flash Platforming/Beat-em-up series made by Flipline Studios, of the Papa Louie Arcade fame.

The first game is that on a routine treasure hunt, due to missing warning symbols, McCoy takes the cursed Thorned Emerald and thus, is transformed into a walking cactus by the ancient Curse of Thorns. His mission is simple — to return the emerald to its true home by following the map pieces. If he fails this quest, the curse will eventually turn him into a lifeless stone cactus — just like the last foolish person. Complicating his quest are the army of Enemigos employed by the four-armed Hex Hatfield, who wishes to have the emerald for his own greedy purposes.

Brawl, gun, and platform your way through the swarms of Enemigos and the terrain's natural traps. All across journey, you will find and master a multitude of weaponry ranging from machetes to bombs to even squirt guns. As you complete levels, you will gain the missing map pieces that will guide you to the emerald's true resting place (and the rest of the levels). As you beat Enemigos, you gain money and/or their weapons (temporarily). Of course, the money you can gain can be increased drastically by juggling enemies repeatedly. You can then use that money to upgrade all the different stats available — such as punching strength, sword strength, etc. Master all these techniques, gain the five hidden treasures in each level, and complete all the achievements to make a path towards victory and dispelling the curse!

Eventually, an epic showdown between McCoy and Hatfield takes place, and with Hatfield defeated, the former finally restored the Emerald to its rightful place... Or not.

The second game titled Cactus McCoy 2: The Ruins of Calavera follows up our story as after the events of the first game, McCoy is now a seasoned treasure hunter (but is still half-cactus, because why not?). He encounters a mysterious winged woman who reveals herself to be Ella Windstorm, the Last of Her Kind. Together they plan on taking back Ella's ancestral treasures, but not before being interrupted by Dark Action Girl Malana Mire, who along with her Enemigos and the Evil Duo of Alpaca Jack and Dumbbell, also plot to steal Ella's treasure by kidnapping her. Cactus McCoy must again punch his way of trouble to rescue Ella as Malana Mire also seeks a weapon which can prove deadly under her control...