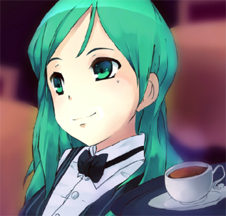 Isis Black: lovable anemic, teacher's pet, and cannoli consultant.
"Isis, your average American teenager, happens upon a part time job opening at Café Rouge. During the day, it is a normal, quaint café and bakery. But when night takes over, it is transformed into a five star restaurant-theater-café, with live stage performances and first class customers arriving in the middle of the night. As Isis delves deeper into this strange café, she becomes entangled in the mystery of its’ haunted world. Will she find friends, or enemies? Will she follow fate or make her own destiny? Will she find love?"
—blurb from the game menu
Advertisement:

): an otome visual novel also marketed as a cooking game for reasons that cannot be explained.

You play the aspiring young student Isis Black, who has recently applied for her very first job at a quaint nearby joint called Cafe Rouge. Despite her limp resume and want for any actual skills, she's hired immediately and put to work. Soon, however, Isis finds that the nightlife of the vibrant restaurant may not be what she bargained for.

The game was released over the summer of 2012 with seven episodes spanning every few weeks or so, from June 14th to September 30th. Like most works of the genre, the player can choose from a handful of handsome potential mates, namely the ambitious but childish best friend, Valentino Michaels, the empathetic and attractive new teacher, Ron Davidson, or the illustrious cafe owner with a Dark and Troubled Past, Antoine Le Rouge.

You can play all seven installments online for free:

A remake was successfully Kickstarted

and is currently in production.

Okay, another day of work.