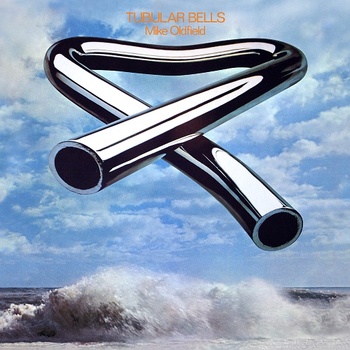 The hugely successful debut album by Mike Oldfield and the debut release by the then-nascent, then-indie Virgin Records. The album is known for its only track, split across two movements (one per side), which was soon used as the recognizable theme to the film The Exorcist. The album is also well-known for its unexpectedly gigantic financial success, topping the charts in the UK, the US, Australia, and Canada, and being certified noncuple-platinum in the UK, triple-platinum in Australia, double-platinum in Canada, and gold in the United States, France, the Netherlands, and Sweden. This success provided the foundation for what became Sir Richard Branson's Virgin empire, which today covers far too many industries to keep track of; previously, Branson had been the owner of a single, though quite successful, record shop.

Although Oldfield was to later become known as a New Age artist, he has stated that Tubular Bells is too dynamic to fall into such a category, though some elements are similar. It has, by contrast, been featured on rock album lists, and is usually classified as a Progressive Rock album, along with most of the rest of his output (Earth Moving aside).

Oldfield plays nearly all the instruments featured on the first album himself through overdubbing— the only exceptions were flute (Jon Field), string bass (Lindsay Cooper) and drums (Simon Broughton). At the time, overdubbing wasn't so widespread as it is now, and was a notable feature of the album in 1973. The sequels continue this practice, although some instruments are played by others. According to engineer Simon Heyworth

, the "Piltdown Man" section (titled "Caveman" in the 2003 version) resulted from Virgin Records owner Richard Branson pressuring Oldfield to add vocals to at least one section to make it more marketable as a single. Oldfield stormed out of the meeting saying "You want lyrics? I'll give you lyrics!", proceeded to get smashed on half a bottle of whiskey and "screamed his brains out" for ten minutes in the studio.

Speaking of singles, the album was actually supported by two: in the US, the "Introduction" section from Part One, backed with the "Finale" section, was put out to bank on the popularity that the former gained from The Exorcist; both tracks were simply titled "Tubular Bells", with "Introduction" being distinguished by a parenthetical note about its film spot. Since the single was released without Oldfield's permission, he put together a different release for the British and European markets aptly titled "Mike Oldfield's Single", a re-recording of the "Bagpipes Guitar" segment of Part Two backed with a Cover Version of "Froggy Went a-Courting".