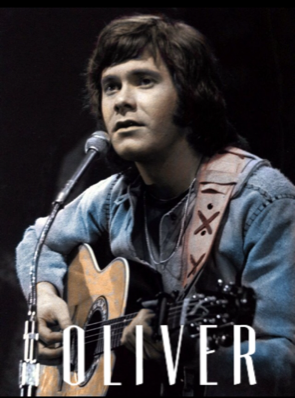 Oliver, born William Oliver Swofford (22 February 1945 – 12 February 2000), was an American pop singer. He could be described as something of a two-hit wonder. Nowadays, he is mostly remembered as either the guy who brought the Hair song "Good Morning Starshine" onto the pop charts, or the singer of "Jean", the theme to the film adaptation of The Prime of Miss Jean Brodie.

Prior to his solo success, Oliver was a member of two popular music groups — The Virginians and, later, The Good Earth — and was then known as Bill Swofford. He became an overnight sensation in the summer of 1969, when his recording of "Good Morning Starshine" reached No. 3 on the Billboard Hot 100 in July of that year, sold over one million copies, and was awarded a gold disc by the R.I.A.A. a month later.

That fall, "Jean", a softer, ballad single bested his previous effort by one, reaching No. 2 on the Hot 100 and No. 1 on the Billboard Easy Listeningnote now Adult Contemporary chart. Written by poet Rod McKuen, "Jean" also sold over one million copies, garnering Oliver his second gold disc in as many months. Performing both hits on a number of TV variety shows and specials in the late 1960s, including The Ed Sullivan Show, helped both songs.

Oliver had more modest commercial success, however, with the cover of "Sunday Mornin'", which peaked at No. 35 in December 1969, and "Angelica", which stalled at No. 97 four months later. In addition, his cover of "I Can Remember", the 1968 James & Bobby Purify hit, missed the Hot 100 but climbed into the top 25 of the Billboard Easy Listening chart in the mid-summer of 1970. Late that fall, Oliver also had one inspirational recording entitled "Light the Way", composed by Eric Carmen. Oliver's last single to enter the pop music charts was his 1971 cover of "Early Morning Rain" by his personal friend, Canadian singer-songwriter Gordon Lightfoot. The song "Bubbled Under" at No. 124 on May 1, 1971 and also reached No. 38 on the Easy Listening chart a few weeks later.

As producer Bob Crewe preferred elaborately orchestrated musical arrangements and Oliver preferred a simpler folk sound, these "creative differences" led them to part ways in 1971. Resuming the name Bill "Oliver" Swofford after the release of his Prism album, the singer toured hundreds of college campuses throughout the United States from the early 70s until the early 1980s. He eventually retired from the music industry in the 1980s after issues with the release of his last album. He was decidedly a people person and took on a job at Merck Pharmaceuticals and enjoyed a tremendously successful career there; however, after just 8 years on the job, he found out he had cancer. His younger brother Johnnote Notable in his own right, especially among US college sports fans, as commissioner of the Atlantic Coast Conference for 24 years until retiring in June 2021. John took that job after a long run as athletic director at both brothers' alma mater, the University of North Carolina at Chapel Hill. stepped up and donated bone marrow and although it appeared to be well accepted, Oliver's health took a turn for the worst in late 1999 and he died of Non-Hodgkin's lymphoma in February 2000, in Shreveport, LA. He was laid to rest at Laurel Land Cemetary in Dallas.

In February 2016, Oliver was given a fan page through Facebook under the name "William.Oliver.Swofford.Fans", with an accompanying YouTube Channel "The William Oliver Swofford Music Channel". The FB page contains a plethora of memorabilia...photos, links to videos including rare footage of TV and concert performances, and information on his life and career. The YouTube Channel is where ALL of his music is being put to video segments using his personal digital masters and photos. You can check out his fan page at URL/www.facebook.com\william.oliver.swofford.fans.