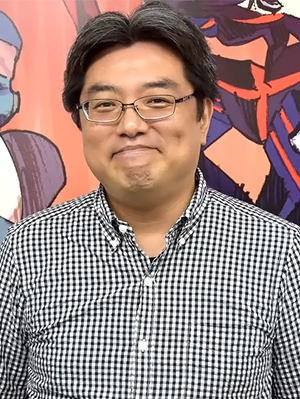 Imaishi? Who's that?
Advertisement:

Hiroyuki Imaishi (born October 4, 1971) is an Anime director and animator, and co-founder of Studio TRIGGER, also well-known for his work at Studio Gainax.

Imaishi began his animation career in 1995, working on the iconic anime Neon Genesis Evangelion as a key animator. He continued to work on other Gainax works such as FLCL and DieBuster in various animation roles. The first two anime he worked on as a director were the Production I.G film Dead Leaves and the first episode of the Re: Cutie Honey OVA.

Imaishi's debut as a series director was the 2007 Gainax anime Tengen Toppa Gurren Lagann, released to critical acclaim. He also directed the 2010 anime Panty & Stocking with Garterbelt, months before leaving Gainax. In August of 2011, he co-founded Studio Trigger and made his studio debut as director in Kill la Kill, released in 2013.

Imaishi is famous for his fast-paced action series, which are often overdosed with Rule of Cool and Fanservice. His works are also known for having distinct and unique art styles, ranging from gritty and sketchy to inspired by 90's cartoons.

Other Works Imaishi has Worked On: