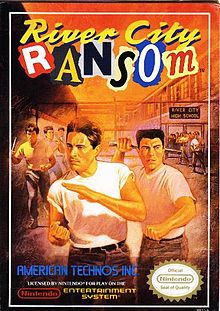 BARF!
"Kids, if there's one thing you take away from River City Ransom, may it be that violence is the answer to your problems. If you beat a gang member hard enough, he will become an honor student. And if you beat an honor student hard enough, he will give you his lunch money. And the final moral is: it's all about good grades and trips to the mall."
—Seanbaby
Advertisement:

River City Ransom, released in Japan as Downtown Nekketsu Monogatari (part of the Kunio-kun series, which also included the Super Dodge Ball series, Crash 'n the Boys: Street Challenge, and the original Renegade) and in Europe as Street Gangs, is a Beat 'em Up with elements of a Role-Playing Game. The story goes that Ryan's (Riki's) girlfriend gets kidnapped by River City High's top gang leader, Slick (Yamada), who also happens to be the arch-rival of Cross Town High's top punk, Alex (Kunio). So Alex and Ryan fight their way past gang territories and various malls to get to River City High, take down Slick, and rescue Ryan's girlfriend.

While not the most well-known game on the Nintendo Entertainment System, it was well-received by those who did play it. It offered several different ways to customize your character, was one of the earliest games to blend RPG elements into another genre in a successful fashion, and was noted for its humor in many spots.

Has a Japan only sequel/spin-off Downtown Special: Kunio-kun no Jidaigeki Dayo Zen'in Shūgō!, which is practically River City Ransom recycled in historical Japan. It is less linear, has a proper save system in place of the original's long passwords, allows computer controlled allies in a 1 player game and has a great deal more moves, but replaces the classic "eat food for power" with equipping items and a level up system, restricting food to health regeneration.

The storyline (but not the gameplay) of River City Ransom was continued in the (also Japan only) game Downtown Nekketsu Kōshinkyoku: Soreyuke Dai Undōkai. Oddly enough America did get the sequel to Soreyuke Dai Undōkai, which was localized as Crash 'n' the Boys: Street Challenge.

A remake, River City Ransom EX, came out in 2004 for the Game Boy Advance, which added more moves, more gangs, more weapons, more characters (some of them from later Downtown Nekketsu games), and the option to have up to three allies fighting alongside you. However, it lacked a proper 2-player co-op mode and while the English version featured an Americanized script like its NES counterpart, the characters were still drawn with their Japanese school uniforms.

Nekketsu Koha Kunio-Kun SP: Ranto Kyosokyoku, a sequel to both River City Ransom and the original Kunio-Kun game, was released on the 3DS in 2013, later localized to English as River City: Tokyo Rumble in 2016.

Another remake, Downtown Nekketsu Monogatari SP, was released in Japan for the 3DS in 2016 as part of the franchise's 30th anniversary celebration. These

pretty much tell it like it is. An English localization was released in 2017 under the title River City: Rival Showdown.

through Kickstarter. The game was delayed many times, but finally released on February 27, 2017 on Steam.

Before River City Ransom: Underground was announced, the game actually had not one but TWO cancelled sequels.

In 2019, WayForward Technologies released River City Girls, a Distaff Counterpart Gaiden Game where the plot has Kyoko and Misako rescue Kunio and Riki.

The game was released as part of the Double Dragon & Kunio-Kun Retro Brawler Bundle in North America in 2020, and includes both the Western version of the game and the original Japanese game translated into English.