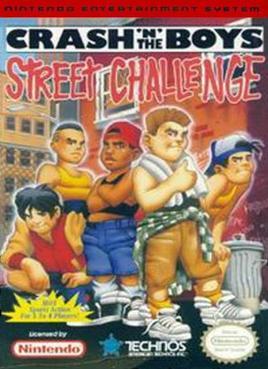 Crash 'n' the Boys: Street Challenge is a multi-sports game in Kunio-kun series created by Technos Japan Corp. It was first released for the Nintendo Entertainment System in Japan on June 1992 (as Bikkuri Nekketsu Shin Kiroku! Harukanaru Kin Medal) and then in America on October 1992. A Japan-only Game Boy version was released on July 16, 1993. Crash 'n' the Boys became available for the Wii Virtual Console on September 14, 2009 and the 3DS Virtual Console on December 19, 2013.

The story of the game is that Team Southside (Team Nekketsu), led by Jeff "Crash" Cooney (Kunio) and friends, has won the All-City Track Meet yet again. Todd (Todou) has had enough of the losses his team endured because of them and decides to issue a challenge to Crash and his team. To raise the stakes, he invited two other high schools and another team sponsored by his wealthy father, determined to beat Cooney one way or another.