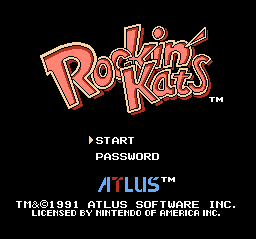 Rockin' Kats (known as NY Nyankies in Japan) is a Platform Game developed by Atlus in the early 90's for the NES, revolving around a young cat named Willy in a vague Prohibition-era setting who has to rescue his girlfriend Jill from the bulldog mob boss Mugsy.
Advertisement:

The main gimmick of the game is the spring-loaded boxing glove gun that Willy uses as a weapon. On top of just punching enemies with it, he can also grab and swing from parts of the stage, grab certain projectiles and send them back to the enemy, and launch himself off of the floor and certain objects. The game also included Mega Man (Classic)-style non-linear stage progression (done through choosing "channels" on a TV, a shopping channel for buying powerups, and a "bonus channel" for various minigames to earn cash and extra lives.