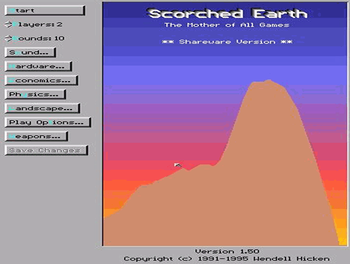 The original in all its DOSBox glory.
Scorched Earth is a popular shareware Artillery Game, originally written by Wendell Hicken using Borland C++ and Turbo Assembler, in which tanks do turn-based battle in two-dimensional terrain, with each player adjusting the angle and power of his or her tank's turret cannon before each shot.
Advertisement:

Things get interesting with up to ten players, a wide variety of AI levels and an even wider assortment of power-ups players can purchase between rounds, including batteries, Deflector Shields, warheads that can destroy the ground beneath your enemies (or create new ground on top of them, burying them alive), napalm, and conventional explosives of various sizes and stability. (Love that Funky Bomb!)

The spiritual predecessor of games like Worms and Gunbound, Scorch (as it is known to fans) is the self-proclaimed "Mother of All Games", with a very simple presentation that is nevertheless addictive.

is the free three-dimensional Fan Sequel available for all widespread operating systems and is even included in Gentoo and Debian/Ubuntu Linux repositories.