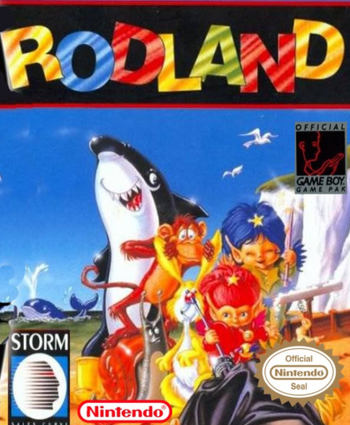 Rod Land (known in Japan as Yousei Monogatari Rod Land, lit. "Rod Land: A Fairy Tale") is a 1990 arcade Elimination Platformer by Jaleco. Rit and Tam must save their kidnapped mother.

The gameplay is fairly simple. On each screen, there is a set amount of enemies, and you must kill all of them to advance to the next screen. Your weapon is a magic rod that can immobilize enemies. You use the rod to beat enemies against the floor, or each other, until they poof. There are also magic shoes capable of creating ladders, since your character cannot jump — since they never appear or get mentioned again outside the intro, this ability is sometimes attributed to the rods.