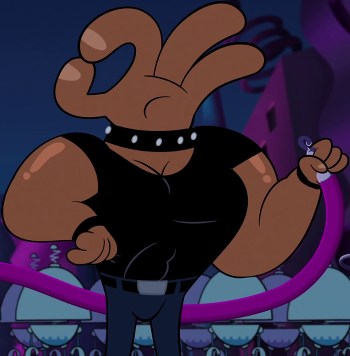 "Knucklehead" can't get any more literal than this.
Advertisement:

The head is one of the most important parts of the body. It contains the brain, eyes, ears, nose, and mouth; all vital organs for perception and aid in various sensory functions such as sight, hearing, smell, and taste, respectively. Now imagine if in its place is a different body part... yet it retains some or all the features and functions of a regular head. That would be this trope.

or development of heads in animals is an evolutionary trend to concentrate the nervous system, sense organs, and feeding structures at a front end, but the evolutionary process for the creatures with this trope either didn't see it fit to do so or just took an effort to be as weird as possible.

Animate Body Parts have a chance of becoming this if they gain a completely separate body but they may also go for being a Cephalothorax (so you can have another body part functioning as a head that is also a chest). Specifically, a creature with an eye as its entire "head-chest" is also an Oculothorax and those examples should go there.

For the trope to be played straight, the replacement organ must still serve its intended purpose in addition to being a head. A head that merely looks like another body part (like in the cases of some Eldritch Abominations, Starfish Aliens, and Gonks) is a subversion.

With or without actual facial features, this may lead to Nightmare Face if the body part in place of the head just feels wrong. It may overlap with Multiple Head Case, if other body parts are also functioning as heads by their own right, and other Spare Body Parts tropes, if a part replacing the head creates a surplus.

This is a sub-trope of Non-Human Head. Compare/contrast Skull for a Head, which is just a regular head but without the fleshy bits, and Brain Monster, when it doesn't have the bony bits (sometimes).

Not to Be Confused with Piano Drop, which is about a keyboard instrument similar to that other organ (not this one) falling overhead.