This page details tropes for Yu, the main protagonist of Persona 4.

For tropes relating to him in Persona 4: Arena, click here. 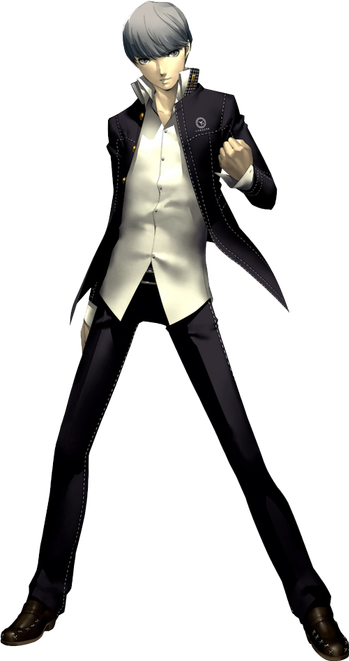 The main protagonist who can be named by the player at the beginning. He uses two-handed swords and is the only member of the Team that can switch Personas and fuse them to make better ones, granting extreme versatility. The manga gave him the name "Souji Seta" and the anime named him "Yu Narukami" - due to the anime's popularity, the latter became his official Canon Name.

Due to his parents having to work overseas, he has to move to the rural town of Inaba to stay with his uncle, police officer Ryotaro Dojima, and Dojima's six-year-old daughter Nanako, for 2011-2012 school year. At Yasogami High, he quickly makes friends with class clown Yosuke Hanamura and kung-fu fangirl Chie Satonaka. Soon enough he learns about the "Midnight Channel" and discovers his ability to insert his body into the television. This leads him into a quest to uncover the truth behind a series of inexplicable murders, in the process gaining a lot of friends and, when he has to leave Inaba a year later, lots of fond memories from an otherwise forgettable town.

His initial Persona is Izanagi, of the Fool Arcana. In Japanese mythology, Izanagi and his wife Izanami gave birth to the islands of Japan. After Izanami's death, Izanagi visited his wife in Yomi - the underworld - in the hopes of retrieving her. Izanagi broke his promise not to look upon Izanami, discovering her to have become bathed in the filth of Yomi. Chased by the demons of Izanami, he fled, coating himself in the foul matter, and sealed the entrance to the underworld, Yomotsu Hirasaka, with a large boulder. Enraged, Izanami swore to kill 1,000 humans each day, and Izanagi promised to give life to 1,500 each day. Izanagi cleansed himself of the filth, giving birth to several gods in the process. Much like Izanagi gave birth to many gods of Japan, the protagonist helps to create the Personas of the party, by rescuing them and later helping them overcome their flaws through Social Links, evolving their Personas - some of the Personas are even directly related to Izanagi in myth, such as Yukiko's Amaterasu and Yosuke's Susano-o. In the True Ending, he manifests the power of his bonds to use the World Arcana and evolve Izanagi into his Ultimate Persona, Izanagi-no-Okami - "great god Izanagi".

During the Golden concert scene, he plays the electric bass guitar.