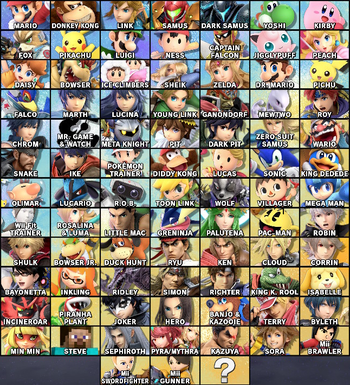 The full playable roster of Super Smash Bros. Ultimate.note This is an in-game vertical variant of the character selection screen, used in Squad Strike.
Advertisement:

Super Smash Bros. is a series of Mascot Fighter video games featuring Nintendo characters, with several exceptions. Nintendo is a big company, so these games naturally have numerous characters. Most of these will be very familiar to fans of the franchises they come from, so see their own pages and character sheets for specific details.

Due to the size, this page has been split into several sections. There are pages for the playable characters as well as for bosses, assists, and other prominent NPCs who debuted in these games. For playable characters, they are arranged in order of their appearance through the series, grouped through reveals. The number on their folder (and consequently their numbering in Ultimate) indicates the order that they were introduced into the Smash Bros. series. Echo Fighters introduced in Ultimate are separated in their own section but otherwise arranged by their own reveals instead of their numbers, while the two that were introduced prior are placed with characters within the timeframe of their reveals.

Super Smash Bros. for Nintendo 3DS and Wii U
Link to main page