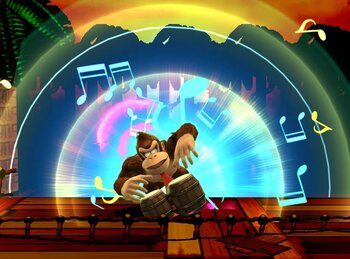 Music so awesome it hurts (in this case, literally).
Advertisement:

In addition to its own music, the Super Smash Bros. series has a habit of taking older music tracks and making them awesome, whether they already were or not. The entirety of Brawl's soundtrack alone could count considering it featured the largest number of video game composers to work together on a single game at the time. Games like the 3DS/Wii U versions and Ultimate have since expanded those games even further, with Ultimate now having over 1,000 tracks on its own (over 1,100 including victory fanfares) as of the Version 10.0.0 Sephiroth update! And with Ultimate allowing every track in the game to be usable for all of their Battlefield stages as well as Final Destination as of their Version 8.1 update, those tracks can now all be usable for fighting purposes as well!

Note: If the music is unchanged from its original game, then put it in its relevant section of Awesome Music, not here.

Animal Crossing
ARMS
Banjo-Kazooie
Bayonetta
Castlevania
Honestly, every single new remix the music composed is absolutely godlike, which is to be expected since it's Castlevania.
Donkey Kong (Country)
Duck Hunt
F-Zero
Fatal Fury/King Of Fighters
While previous DLC entries had around 8-11 tracks of material to cover for Ultimate's newest entries (both old and newer remixes), SNK gave out a resounding "Okay!" to approving all 50 of Masahiro Sakurai's top choices for Terry Bogard's entry into Super Smash Bros. Ultimate. On one hand, we can just say SNK has plenty of awesome music in general and leave it at that. However, it's better to highlight the remixes in particular that got in for this case.
Final Fantasy
Find Mii/StreetPass Quest
Fire Emblem
Game & Watch
Ice Climber
Kid Icarus
Kirby
The Legend of Zelda
Mega Man
Metal Gear
Metroid
Minecraft
While Minecraft may not have had that much music added to the game (as a point of reference, it has less tracks than the Dragon Quest series for Ultimate's DLC), it does have all but one of their seven tracks includednote only the Clockwork Crafter track from Battle Mini Game is taken directly this time around be special remixes based off of tracks from either spinoffs (specifically Minecraft Dungeons and Minecraft Earth) or mini-game tracks added later on to the original Minecraft to help make up for that!
MOTHER (Earthbound)
Pac-Man
Persona
Pikmin
Pokémon
Punch-Out!!
Sonic the Hedgehog
Splatoon
Star Fox
Street Fighter
Super Mario Bros.
This includes Dr. Mario, Mario Kart and Luigi's Mansion.Main Series

Tekken
WarioWare
Wii Series
Xenoblade
Yoshi's Island
This includes Yoshi's Story and Yoshi's Woolly World.
Stage-Represented Series
Music from games that have no fighters from its specific series, but have a respective stage at the most.note The Version 8.1 update in Ultimate allowed for these tracks to be played on any of the Battlefield stages and Final Destination.