This page lists the fighters introduced in the Smash Direct and in E3 2014 trailers from Super Smash Bros. for Nintendo 3DS and Wii U. This includes Dark Pit, who would later be remarketed as an Echo Fighter in the next installment. 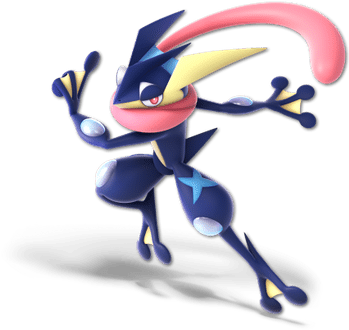 Master of Stealth /
The Unpredictable Ninja Pokémon
3DS/Wii U 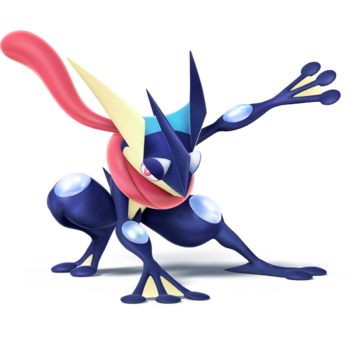 The Ninja Pokémon and final evolution of Froakie, the water starter of the Kalos region. Greninja is a sneaky, creepy, and highly skilled humanoid frog ninja boasting the Water/Dark type. It is able to confound opponents with its blinding speed and agility and slice them with compressed water. It's also known in more recent years for being one of the most powerful Pokémon that Ash Ketchum has ever owned. In Ultimate, its Final Smash has been updated to have it transform into Ash-Greninja.

See Pokémon: Generation VI - Chespin to Hawlucha for more information on the character in his origin series.
Mii Fighters In General 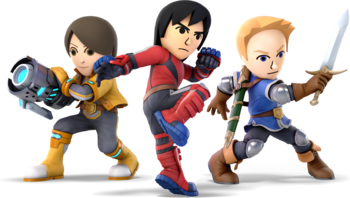 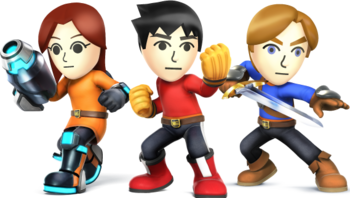 Playable in: 3DS/Wii U, Ultimate
"Now, by using a Mii Fighter, anyone can join the battle!

Nintendo's customizable avatars, a staple since the days of the Wii, can now fight alongside the other Nintendo icons with movesets created specifically for Super Smash Bros.. They come in three varieties with their own movesets: Brawler, Swordfighter, and Gunner. Their customization factor not only allows a player the chance to fight with their own unique moveset, but also several other unique match-ups to occur, such as fighting with Abraham Lincoln, Elijah Wood, Ice-T, and Nintendo staff such as Reggie Fils-Aime and the late Satoru Iwata. This is further made possible with the downloadable Mii Costumes based on other fan-favorite Nintendo and third-party characters. In short: go nuts! 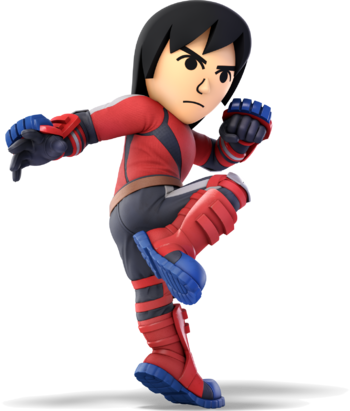 The Brawler of Many Faces
3DS/Wii U 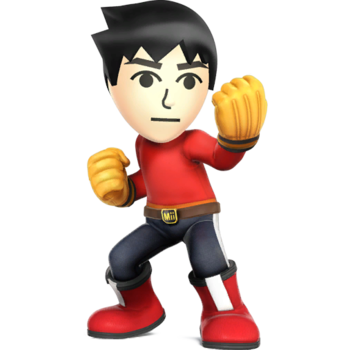 The Brawler is an expert in martial arts, using primarily punches and kicks. They are the strongest and fastest of the three classes, but also have the worst range. 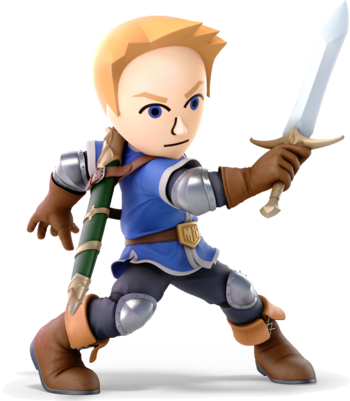 The Swordfighter of Many Faces
3DS/Wii U 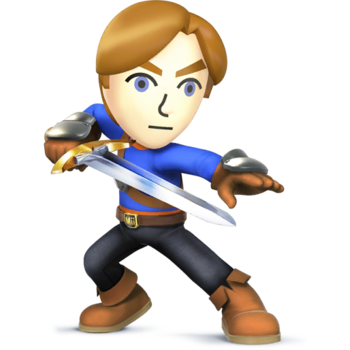 The Swordfighter wields a sword to slash the opponent, and they can also wield a few projectiles. They are in between the Brawler and Gunner in terms of speed, power, and range. 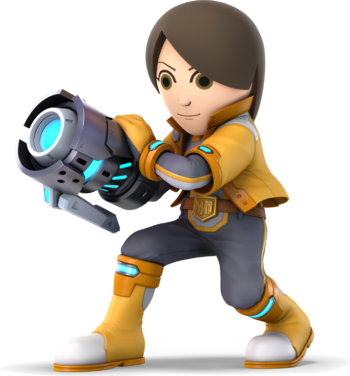 The Gunner of Many Faces
3DS/Wii U 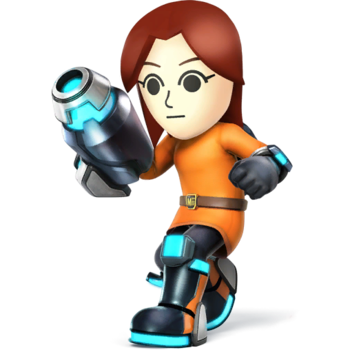 The Gunner is a projectile expert, wielding a mysterious Arm Cannon that has many kinds of bullets and missiles that can be used to attack from afar. They are the slowest and weakest of the three classes, but have the best range by far. 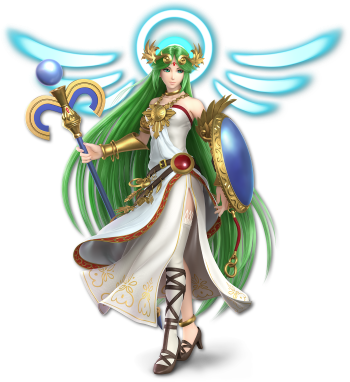 Goddess of Light
3DS/Wii U 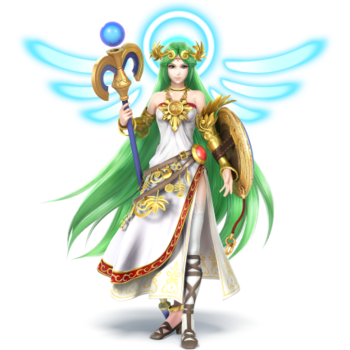 Playable in: 3DS/Wii U, Ultimate
Specials (Default): Autoreticle, Reflect Barrier (3DS/Wii U), Explosive Flame (Ultimate), Warp, Counternote This move and Reflect Barrier were combined into the same move in Ultimate, with the former activating against direct hits and the latter against projectiles
Final Smash: Black Hole Laser
"Oh, I'm not here to save you, Pit. I'm here for a little, uh... divine intervention."

The Goddess of Light and ruler of Skyworld. Palutena goes to great lengths to protect her people, and those who dwell on the surface lands below. She's benevolent, kind, playful, and a massive troll towards Pit, but still gives him advice and provides him with the Power of Flight when it's needed. She definitely shows off the power of a god here, what with her impressive array of customizable combat techniques.

She also has a fairly vast repository of knowledge of the other fighters, which she isn't afraid to share with Pit to help him in battle. 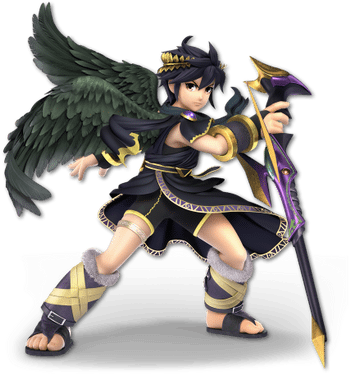 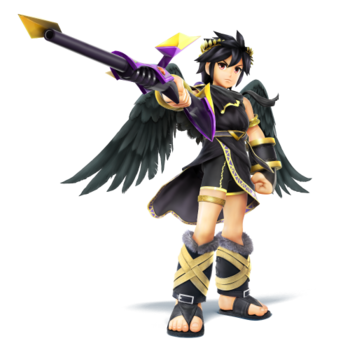 The not-really-evil counterpart of Pit from Kid Icarus Uprising. Dark Pit (or Pittoo if you really wanna tick him off) was created when Pandora used the Mirror of Truth with the intention of getting her own Pit to serve her needs, but for reasons speculated but never outright said, note Palutena believes it's because the mirror copied Pit when he was in the process of breaking it, so the cloning was incomplete Dark Pit was loyal to nobody but himself, attacking both Pit and Pandora, and spending most of the rest of the story fighting Pit or helping him fight the Underworld Army, seemingly at random.

He first appeared as a "fallen angel" Palette Swap of Pit before being made into an actual character. As such, Dark Pit plays like a direct Moveset Clone of his light counterpart, technically being the first proper Echo Fighter to be revealed due to his appearance in Palutena's trailer. Since the events of Uprising, he joined up with the Goddess of Nature Viridi, as their interests coincided with one another.

In comparison to his counterpart, Dark Pit has harder-hitting specials: his Silver Bow deals more damage, as does his Electroshock Arm. In exchange for this extra power, his Bow has a narrower firing range than Pit's, and his Arm doesn't travel as far, although its vertical range edges Pit's out.

See Kid Icarus: Protagonists and Allies for more information on the character in his origin series.
Advertisement:
55 – Pac-Man

The Yellow Bane of Ghosts /
Ghost Gobbler
3DS/Wii U 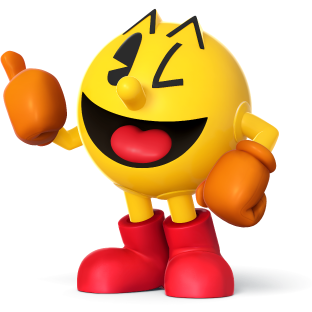 Namco's classic mascot character and arguably the first true mascot of gaming itself. While Pac-Man's character and motivation have changed throughout the years, he's usually a dot-munching yellow ball who fights off the ever-persistent Blinky, Inky, Pinky, and Clyde by eating a Power Pellet. Pac draws from his arcade days, summoning sprites from other Namco games to help him in battle and even assuming his original simplistic form.