This page lists all of the new original fighters in the initial release of Super Smash Bros. Ultimate. 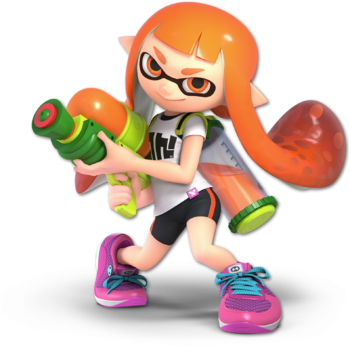 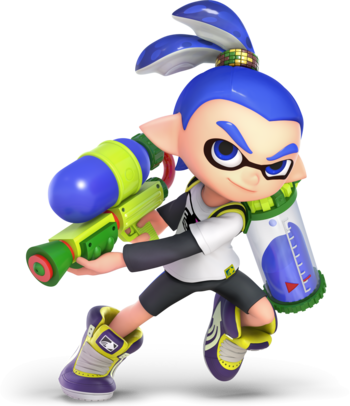 Hailing from the ultra-distant future in the realm of Splatoon, Inklings are a race of anthropomorphic squid that can shapeshift between humanoid and cephalopod forms, utilizing their ink for various purposes within the sport of Turf Wars, striving to be the "freshest" amongst their peers. They were the first newcomers to be confirmed for Ultimate.

Inkling's fighting style revolves around dousing their opponents in their colorful ink, which increases any damage they sustain. Many of their attacks deplete ink from their tanks, and if they run dry, their attacks will lose most of their power. By pressing the special attack button while shielding, however, they can refill their tank. Inklings that can keep their opponents doused in ink while maintaining their limited supply will come out on top!

See the Splatoon character page for more information on the character in their origin series.
65 – Ridley 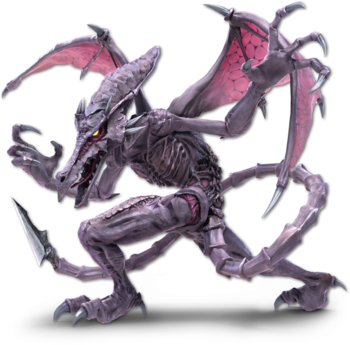 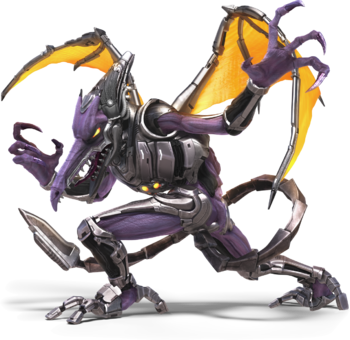 The Arch-Enemy of Samus, a high-ranking leader of the Space Pirates, and a major antagonist of the Metroid series. Ridley is tied to Samus' past and has done battle with her on multiple occasions, coming back from the brink of death each time until his final demise on Zebes. Even so, his legacy lives on in the form of clones, ensuring that he will always pose a threat to the bounty hunter.

He has had multiple appearances in the Super Smash Bros. series as a large boss prior to being Promoted to Playable in Ultimate; for those, see this page. In Ultimate, Ridley is a powerhouse that can wreak havoc on his enemies with vicious slashes and bites, grabs, his Plasma Breath, and the deadly Skewer attack: with the right spacing, it can inflict catastrophic damage upon his foes.

See Ridley's page for more information on the character in his origin series.
66 – Simon 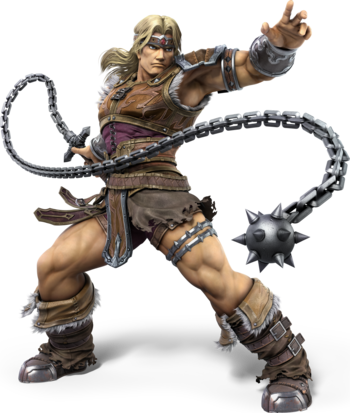 The first and most famous hero of the Castlevania series, Simon Belmont is a member of the illustrious Belmont clan, a family that uses the holy whip, the Vampire Killer, to hunt the evil armies of Dracula wherever they may lurk. Simon himself initially took up the mantle to save Wallachia and the world from Dracula's shadowy rule in the late 17th century, and when Simon later suffered a Dying Curse from his foe, he reassembled Dracula's body to destroy him again and break the curse. He's the second Konami fighter in Super Smash Bros. after Snake.

Simon has a wide array of options when it comes to fighting at range, from the long reach of his Vampire Killer whip (which gives him some of the longest-ranged Smash attacks of the cast) to multiple projectiles to assail enemies from afar, above, and below. At the same time, however, many of his attacks are slow, and his recovery options are lacking. Simon is at the top of his game when he can keep his opponents at arms length, both to take advantage of his powerful ranged abilities and to keep himself from having to recover in the first place.

See Castlevania The Belmont Clan for more information on the character in his origin series.
Advertisement:
67 – King K. Rool 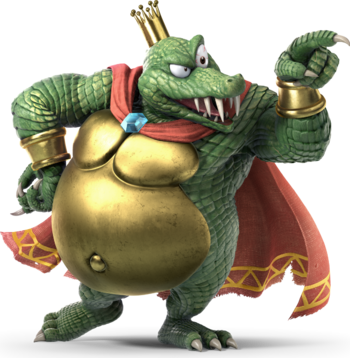 The Kong family's original Arch-Enemy and the Big Bad of the original Donkey Kong Country trilogy (as well as the cartoon of the same name, their Nintendo 64 successor, and five portable titles), King K. Rool is the demented leader of the band of crocodilians known as the Kremling Krew. Usually content with stealing their bananas/medals/Crystal Coconut, he's actually tried to go after the Kongs themselves on a few occasions. After being absent from games for nearly a decade, K. Rool makes his triumphant return as a playable character in Ultimate.

He's also the third character included to be made by a non-Japanese developer, Rare, same as Diddy Kong. K. Rool is a tanky bruiser who can rack up a lot of damage on his foes with his Blunderbuss and Crownerang to attack enemies in various ways. In addition, his pectoral armor can not only be used as a Counter-Attack, but can also No-Sell many attacks while he, himself, is attacking. Take care not to be too reliant on it, however; it will break if overused and leave K. Rool dizzied and vulnerable. 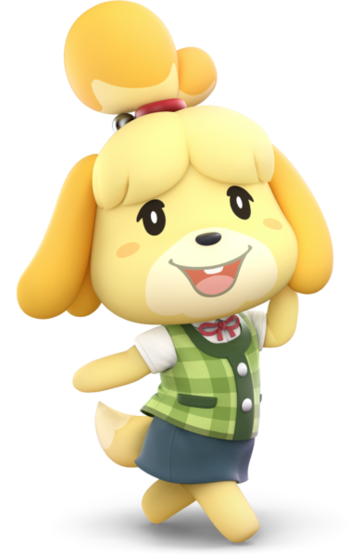 A near-sighted yet very perky anthropomorphic Shih Tzu who was introduced in Animal Crossing: New Leaf and very quickly rose to become one of the series' most popular characters. She debuted as the mayor's secretary, essentially doing most of the government-related work while the mayor (i.e. Villager) lives out the usual villager life, occasionally asking them for certain decisions. She is responsible for enacting town edicts and building projects funded by the mayor, and even is the one keeping the village together while the mayor is away.

She joins Villager in Ultimate as the second Animal Crossing fighter right after deciding to take a break from her duties. She shares a few attacks with Villager, but several of her attacks and specials are completely different. She is the third character originally an Assist Trophy to be Promoted to Playable in the series. 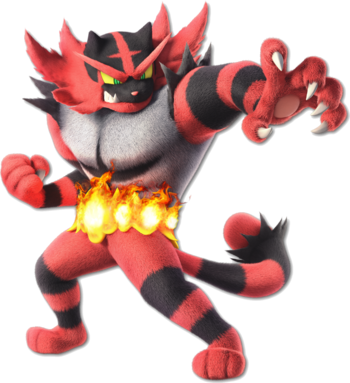 The Heel Pokémon and final evolution of the Alola fire starter, Litten. Incineroar is a fiery bipedal tiger stylized to resemble a pro-wrestler. However, it isn't a Fighting-Type like Lucario, but a Dark-Type, like Greninja. It loves to show off to the crowds by taunting and posing after every successful move it makes. It has a tough persona, but this kitty also has a softer side and loves the attention it gets from children who think it's cool. Notable as the last revealed fighter for the base version of Super Smash Bros. Ultimate, as well as the youngest addition to the base roster by debut alone.

Big, mean, and with strength to spare, Incineroar's grapples are certain to put the pain to its opponents. Its Alolan Whip, in particular, can send opponents flying when used with proper timing. Combined with the strength boost granted from successful use of Revenge, Incineroar's specials will inflict devastating damage and send its foes flying into next week.

See Pokémon: Generation VII - Rowlet to Comfey for more information on the character in their origin series.