This page lists the fighters introduced in the E3 2006 trailer 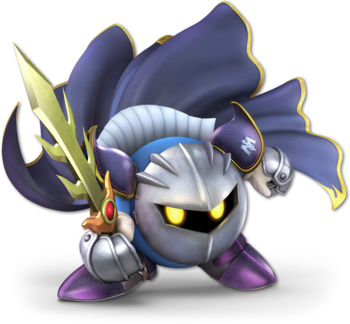 The Masked Swordsman
3DS/Wii U 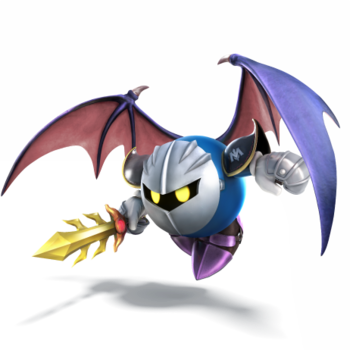 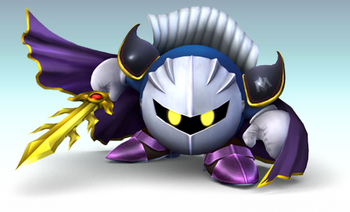 The first new fighter revealed for Brawl. One of Kirby's rivals, an honorable Master Swordsman who travels around the world challenging strong opponents to duels. He's been both a fierce foe and a trusted friend of Kirby, often providing him with a sword to duel with. Only two characters in the Kirby canon have officially beaten Meta Knight — Kirby himself, and his own Mirror Universe counterpart. His mask hides a face remarkably similar to Kirby's, but his exact relationship to Kirby remains a mystery.

Meta Knight brings a wide variety of swift sword strikes to the battlefield, as well as plenty of aerial maneuvers that all serve as recovery options. This makes Meta Knight more focused on speed and maneuverability as a result, preferring to rush opponents down with these attributes in mind. Much like his boss fights, however, any time he finishes his recovery moves will result in him becoming vulnerable to attack, making these moves somewhat risky if they don't land. Despite this, underestimating the swordsman's power is a grave mistake indeed.

See Meta Knight's page for more information on the character in his origin series.
28 – Pit 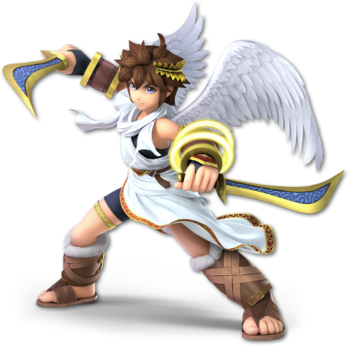 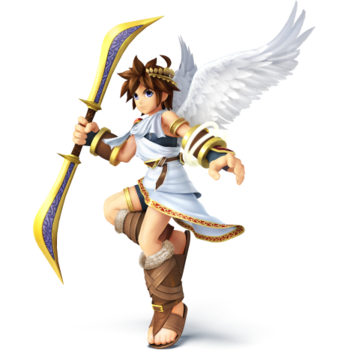 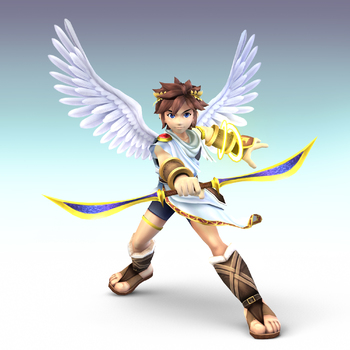 A flightless angel that serves as the commander of the Goddess of Light Palutena's forces, he's the hero of Kid Icarus. He's taken down entire armies (sometimes two entire armies at once), as well as several gods, a crew of space pirates, an alien race, and the embodiment of chaos itself. He disappeared from games after the release of his 1991 Game Boy outing Of Myths and Monsters, but he was brought back 15 years later with a redesign in Brawl before he received a revival of his own series in Kid Icarus: Uprising with said Brawl design, also by Sakurai's team.

Pit is an overall balanced character with decent weight and speed, a couple of extra jumps thanks to his underdeveloped wings, and a wide variety of attacks to choose from. Pit wields Palutena's Bow, which not only serves its intended purpose, but can also be split into twin blades for physical attacks. In Brawl, he used abilities based on his original outing such as temporary wings and a reflective shield, while 3DS/Wii U onward give him a moveset based on Uprising with the additions of an Arm and Orbitars. Regardless of the moveset, these weapons grant Pit plenty of utility and give him plenty of options when it comes to fighting, and he's more than capable of proving how much his Game Overs have toughened him up.

See Pit's page for more information on the character in his origin series.
29 – Zero Suit Samus 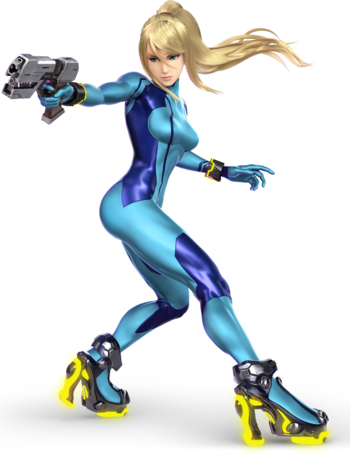 The Warrior Within /
Low Armour, High Agility
3DS/Wii U 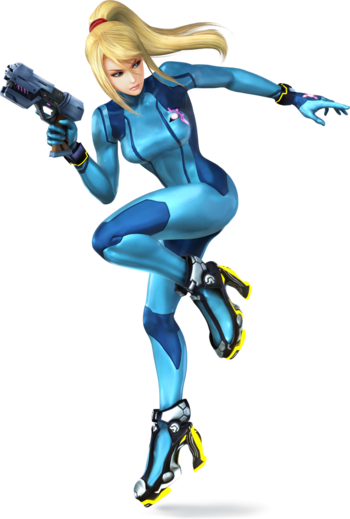 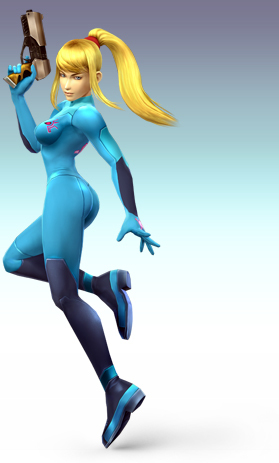 Yep, that's Samus alright: the same bounty hunter that blows Space Pirates to kingdom come, escapes exploding planets and takes down galactic threats like they're nothing. Whenever someone completed a game under a fast enough time or with a high enough percentage, Samus would remove her armor and reveal that she was a female the entire time. The fact that Samus is a girl is well-known today, but when the original Metroid came out, people were genuinely shocked to discover this. She's even been playable in this state at least once, when she had to sneak aboard the Space Pirate Mother Ship after her equipment was destroyed.

Even without her Power Suit, Samus is still a formidable fighter in the Smash Bros. series. Compared to how she plays with the Power Suit, Samus is a lot faster at the cost of becoming lighter and overall weaker, making up for her shortcomings by way of using her Paralyzer to stun opponents. In Brawl, Samus could swap between this state and her Power Suit by way of her Final Smash, though Zero Suit Samus could be accessed at the start by holding the "select" button while picking her. In the fourth game, she becomes a separate character from normal Samus and comes equipped with a pair of jet heels, allowing her to literally rocket across the battlefield and deliver powerful kicks to her foes. Despite the lack of bulk, Samus continues to kick massive amounts of butt without her iconic armor.

See Samus's page for more information on the character in her origin series.
Advertisement:
30 – Wario 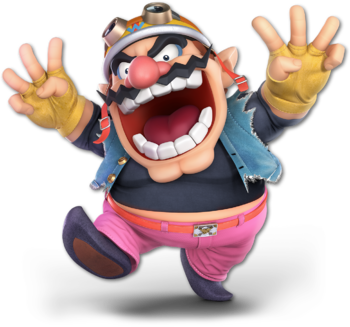 Scoundrel With a Fart of Gold
Overalls Wario 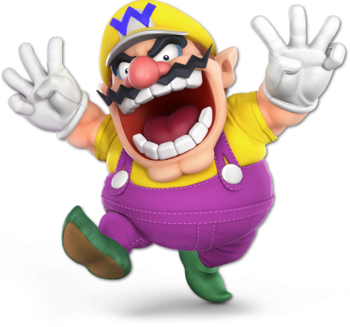 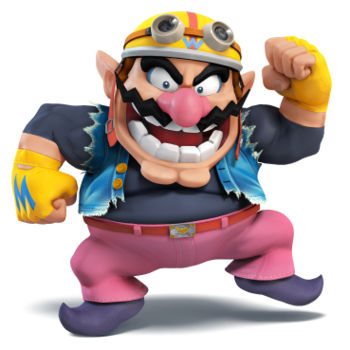 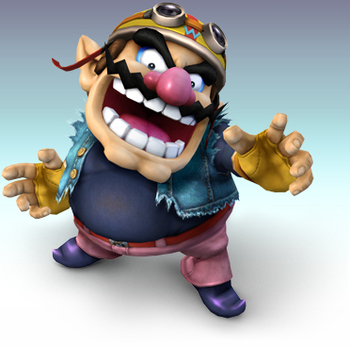 Mario's Evil Counterpart, Wario is practically the polar opposite of his red-clad nemesis; he's slobbish, greedy and willing to do just about anything to suit his needs. He started as the main antagonist of Super Mario Land 2: 6 Golden Coins before becoming the protagonist of his own series of games. Later, he founded his own microgame company, the outfit of which is his default costume in Smash Bros.

Just because he's fat doesn't mean he isn't a force to be reckoned with. As opposed to making him a straight-up bruiser like his initial self, he takes more inspiration from the fast-paced gameplay and wacky nature of the WarioWare games. He's definitely a lot more agile than he looks, and his strength and versatility isn't to be underestimated, with special mention going to his trademark Wario Bike. Players especially need to be careful around his mouth and especially his posterior, notably whenever his belly starts bulging.

See the Wario and Waluigi character page for more information on the character in his origin series.
31 – Snake 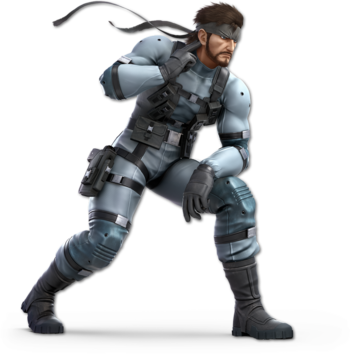 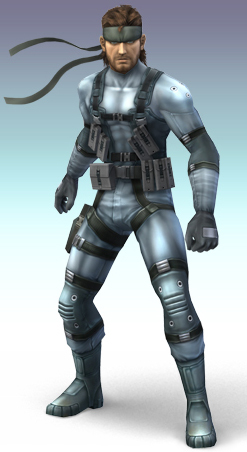 One of the original stealth game heroes and the main protagonist of Konami's Metal Gear series, Solid Snake is a mercenary formerly affiliated with the high-tech special operations group FOXHOUND, and a clone of the once-renowned super-soldier Big Boss. Throughout his career, Snake has successfully infiltrated several military bases guarded by some of the fiercest military groups on the planet, including Outer Heaven, Zanzibar Land, and Shadow Moses Island, even having a hand in helping fellow agent Raiden infiltrate the Big Shell, all to stop the ever-present Metal Gear from causing international nuclear war. His many successful missions and insane feats have made him a legendary figure within the intelligence community, capable of making the impossible possible.

In Smash Bros., Snake forgoes stealth to bring the pain with a variety of explosives and melee techniques. He's a slow and somewhat heavy character, which of course means a strong offense, but his moves are more tailored to controlling the battlefield and tricking his opponents as he's known to do in his home series. He's notable as the very first third-party character to be introduced to the series, and for being the first character from a series rated Mature by the ESRB.

See Solid Snake's page for more information on the character in his origin series.