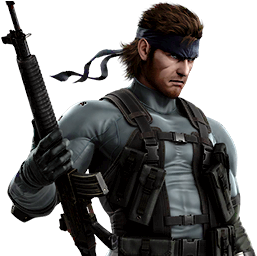 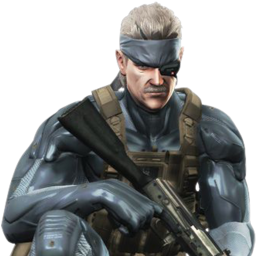 A.K.A.: Old Snake, Iroquois Pliskin, David
Voiced by: Akio Ōtsuka (JP), David Hayter (EN)
Advertisement:
"I only felt truly alive when I was staring Death in the face. I don't know, maybe it's written into my genes."

The star of the show for much of the Metal Gear series, Solid Snake is an infiltration specialist whose exploits usually revolve around destroying the titular Metal Gears, nuclear-armed Humongous Mecha whose very existence shifts the balance of power in the world dramatically. Through this, he becomes entangled in a massive web of control and deceit centered around the Patriots, a shadowy Ancient Conspiracy group that has been engaged in clandestine wars for decades. Without a doubt Solid Snake is "the man who makes the impossible, possible."

The jump to 3-D gaming drastically expanded Snake's character, with the revelation that he was shaken up pretty badly during the MSX era, and that he's actually a laboratory-grown clone of his recurring enemy, Big Boss. He becomes a hermit in the interim, but is forcibly pulled out of retirement when Metal Gear rears its ugly head yet again. The Alaska incident has the benefit of pairing Snake with his future partner, Otacon. Together, the duo combine their brains and brawn to delay the proliferation of Metal Gear, whether it be by lobbying the U.N., or simply blowing up every prototype in sight.

Whilst Snake is indisputably The Hero of the Metal Gear universe, due to the story's non-linear approach he is only the player character for roughly half of the games in the series. The other two protagonists in the franchise are his father Big Boss and protege Raiden.