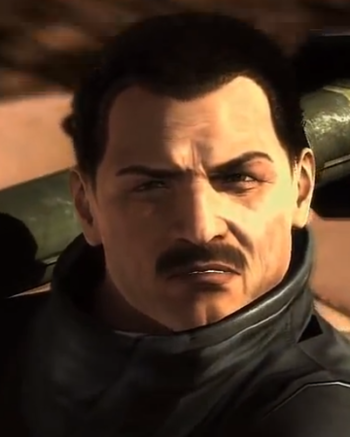 After the Soviet Union dissolved, Boris was discharged from the army for letting his emotions get the better of him on the battlefield and forced to take up work as a mercenary doing "gray area" jobs, something he deeply regrets. He was a friend of Sergei Gurlukovich, and had first met Raiden when the latter was rescuing Sunny (who was Sergei's graddaughter) from Area 51 and helped him get her out of there, becoming Raiden's ally in an unknown capacity since then. In 2014, after the fall of the Patriots, Boris founded Maverick Security Consulting and strove to make a PMC that would keep its actions clean. 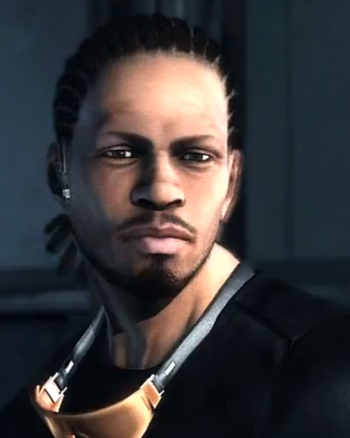 A non-combatant responsible for research and strategic planning at Maverick Inc. and a member of Raiden's mission control team. He had worked in DDR* Disarmament, Demobilization, Reintegration at a non-governmental organization affiliated with the United Nations. After seeing Boris's kind nature first hand, he joined Maverick to help out any way he could. He has a wide range of knowledge in geography, culture, and international sociopolitical conditions, which he provides to help Raiden understand the local cultures and histories of his opposition. 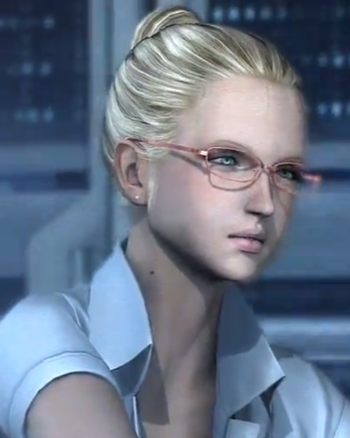 Voiced by: Miyuki Sawashiro (JP), Kari Wahlgren (EN)
"Energy consumption, check. Damage levels, check. Blood pressure, brain waves, blood sugar - check, check, check. All this monitoring equipment, I got a better view than if I was standing next to you."

Courtney is a data analyst for Maverick Security Consulting. She monitors the information sent from Raiden's cyborg body to keep tabs on his condition. While at university, she studied business administration, but was more interested in doing her part to help relieve social unrest and decided to join Maverick on the advice of Kevin, a graduate from her university. She wanted to experience a clean private military security company from a civilian perspective. 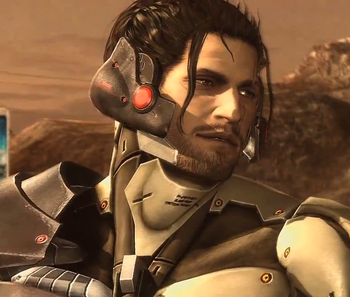 "We've both heard enough speeches about higher causes by now. History will decide who's right."
Voiced by: Hiroaki Hirata (JP), Philip-Anthony Rodriguez (EN)
Image Song and Leitmotif: The Only Thing I Know For Real

"I see... you deny your weapon its purpose! It yearns to bathe in the blood of your enemies, but you hold it back!"

A mysterious cyborg working for Desperado Enforcement. He is a master swordsman of the Brazilian "New Shadow School" technique, with a high frequency blade similar to the one used by Raiden. Early on, Sam is quick to point out that Raiden's view of his sword as a "tool of justice" only hinders his ability to fight effectively, before defeating and almost killing him. In keeping with the Theme Naming of the Winds of Destruction, he is occasionally referred to as "Minuano", the cool winds of Brazil; also, a jet stream is a fast flowing air current found in Earth's upper atmosphere. 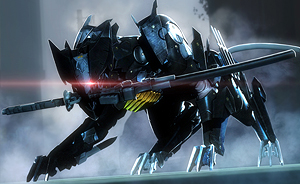 "Are we both here only to fight then?"

A Desperado Enforcement Unmanned Gear (UG) equipped with an advanced artificial intelligence and a prototype interface that allows for verbal communication. It claims to have a supreme intellect that it is unable to use to its full extent, as anytime it disobeys a direct order its memory would be wiped. It is also for this reason that it reluctantly tries to fight Raiden to the death at Desperado's orders. It later becomes an important character that holds the key to the story. 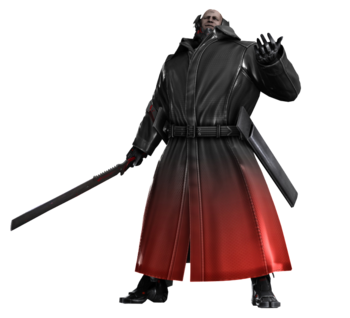 "All we are saying is: Give war a chance!"
Voiced by: Ken Nishida (JP), Crispin Freeman (EN)
Image Song and Leitmotif: Red Sun

"We're just suppliers. We don't create the market for war. Didja think that every battle in history was all part of some big ol' conspiracy? BULLSHIT! War is just part'a who we are. Why fight it?"

The leader of Desperado Enforcement, he is known by the code name of "Sundowner", named after the hot, dry winds of California. As one of the dreaded Winds of Destruction he uses a powerful, specialized cyborg body, different from the ones used by typical contractors. He dual-wields a pair of high-frequency machetes, collectively called "Bloodlust." Go here for his self-demonstrating page. 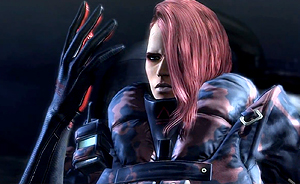 "At times I envied my prey. At least they had a cause to die for."
Voiced by: Romi Park (JP), Salli Saffioti (EN)
Image Song and Leitmotif: A Stranger I Remain

"That's when I realized... I am a killer too. And a good one at that. I slaughtered dozens in Iraq, in Afghanistan... I'd found my calling."

A cyborg, and commanding officer working for Desperado Enforcement, she is one of the four cyborgs called the Winds of Destruction along with Sundowner, Monsoon, and Khamsin. Her codename, Mistral, comes from the cold regional winds along the Mediterranean coast of France. She wields the "L'Étranger", a dual-bladed staff, made from the arms of Dwarf Gekkos, that doubles as a whip. 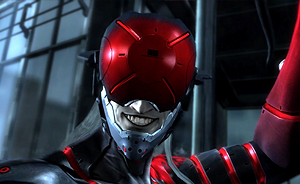 "Wind blows, rain falls. The strong prey upon the weak. Don't be ashamed. It's only nature, running its course."

A cyborg, and commanding officer working for Desperado Enforcement, he is one of the four cyborgs called the Winds of Destruction along with Sundowner, Mistral, and Khamsin. His codename is Monsoon, referring to a seasonal wind that brings rain in tropical areas, especially in Southeast Asia. He wields a pair of Sai called "Dystopia", and has the ability to separate his body into pieces using an advanced system of magnets. 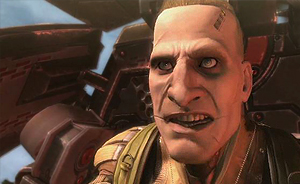 "If you don't know freedom, then I can't expect you to get our cause."
Voiced by: Rikiya Koyama (JP), Benito Martinez (ENG)
Image Song and Leitmotif: The Hot Wind Blowing

"Buckle the fuck up, little doggy. Remember this, we're bringin' freedom here if it kills us. Or better yet: them."

A cyborg, and commanding officer working for Desperado Enforcement, he is one of the four cyborgs called the Winds of Destruction along with Sundowner, Mistral, and Monsoon. His codename is Khamsin, referring to a hot, dry, desert wind in the Middle East. He pilots a large, mech-like suit with a massive, rocket powered chainsaw axe. He believes in freedom and bringing it to the people of Abkhazia. 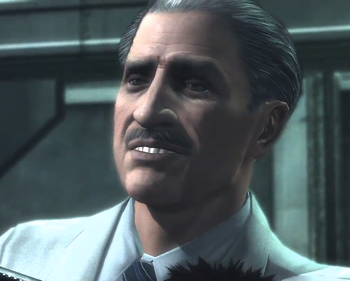 Voiced by: Benito Martinez (EN)
"You've heard of chloroform? A potent anesthetic in smaller doses. But breathe too much of it... And... adios, muchachos."

The chief researcher at a Desperado-owned lab in Mexico responsible for the removal of brains from young orphans and their encasement in cyborg cranium canisters so Desperado and World Marshal can train them via VR training. 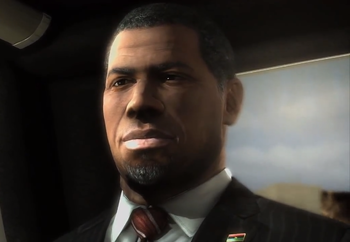 Voiced by: Nobuaki Fukuda (JP), Dorian Harewood (EN)
"I must admit, I once thought of groups like yours as opportunists - enablers of war. But you've trained our new army well - order has returned sooner than expected. Perhaps I was wrong about these 'private military companies'..."

The Prime Minister of an unidentified African country. He takes quite a liking to Raiden. He is later killed by Sundowner. 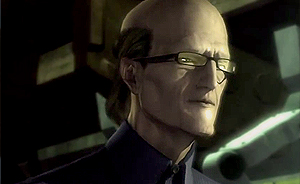 "Rather gruesome, I realize. But then, you Americans enjoy a bit of gore, don't you?"
Voiced by: Mugihito (JP), Jim Ward (EN)
"Ich liebe Kapitalismus! Had the wall come down a few years earlier, I would have a Nobel Prize on my shelf."

Though his real name is Wilhelm Voigt, he prefers to be called "Doktor." He researched advanced weaponry in the GDR (East Germany). He had no job after the fall of the Berlin Wall, but thanks to his studies on myoelectric prosthetics, he found pay working on cyborg technology. Maverick contracted him to remodel and perform maintenance on Raiden. He also uses his vast knowledge of cyborg technology to provide additional support for Raiden during missions. His company is probably TransHominid Systems GmbH, whose brand is clearly visible on Raiden's combat visor. 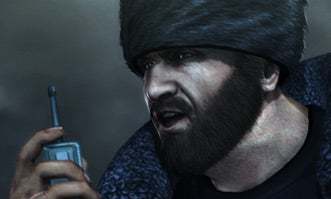 Voiced by: Fumihiko Tachiki (JP), Travis Willingham (EN)
"Built with Russia money, to make Russia money. It is no plant for Abkhaz — It is their prison!"

An Abkazhian terrorist affiliated with Desperado. 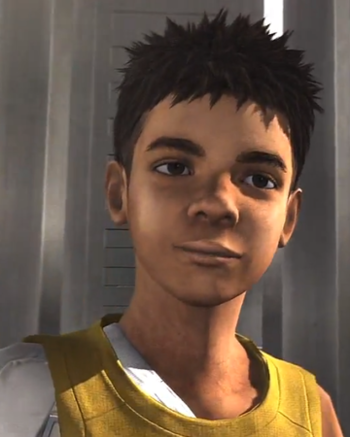 A young Guyanese boy that meets Raiden in the sewers of Mexico. After being rescued, he's turned into a cyborg and joins Maverick. 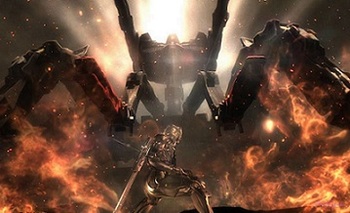 Another Metal Gear built by the United States, this weapon was not kept secret like other Metal Gears. Also unlike other MG weapons it does not contain nuclear firepower, but it can use retractable blades, fire two large plasma cannons to attack, and can also tunnel underground.

WARNING: The following entry contains unmarked spoilers related to the end of the game. Read with caution.