A special forces group formed by Big Boss following the downfall of the original FOX unit. Both Solid Snake and Gray Fox were members of this unit. After Big Boss's Face–Heel Turn in the original Metal Gear, the unit's co-founder and executive officer Roy Campbell becomes the new commanding officer in Metal Gear 2. The most well-known incarnation of the team is featured in Metal Gear Solid, where FOXHOUND has turned renegade after Solid Snake and Campbell left the unit. This incarnation of the team is composed of Solid Snake's Evil Twin Liquid Snake, his Dragon Revolver Ocelot, Ax-Crazy Psycho Mantis, Defrosting Ice Queen Sniper Wolf, Magical Native American Vulcan Raven, and Replicant Snatcher (but not actual Snatcher) Decoy Octopus.
Liquid Snake 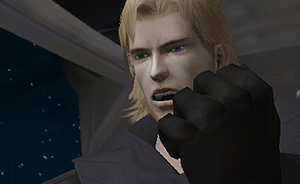 "There definitely is a resemblance, don't you think, little brother? Or should I say big brother? I'm not sure."
Click here 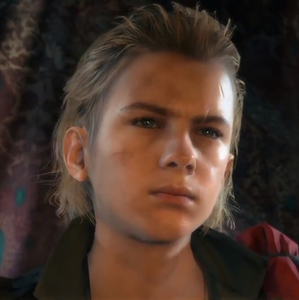 to see Eli in MGSV
Liquid Snake voiced by: Banjo Ginga (JP), Cam Clarke (EN)
Eli voiced by: Yutaro Honjo (JP), Piers Stubbs (EN)
AKA: Master Miller, Eli, White Mamba, A Youth who Curses his Fate
"With all the liars and hypocrites running the world, war isn't what it used to be. We're losing our place in a world that no longer needs us. A world that now spurns our very existence!"

The leader of FOXHOUND, Liquid is the second of the "Sons of Big Boss" introduced. He has a major complex about Solid Snake, and was told for his entire life that his inheritance of Big Boss' recessive genes made him the inferior clone, when in fact the reverse was true. Word of God says he isn't naturally blond. In his youth, he was a blonde-haired child soldier wearing a jackal-tooth necklace and an oversized vest with the words "Never Be Game Over" and "液体人" — "(Liquid Man/Person)" — printed on the back. 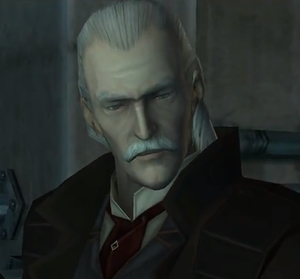 "We're going to play a game, Snake. And we'll find out what kind of man you really are." 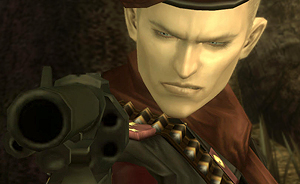 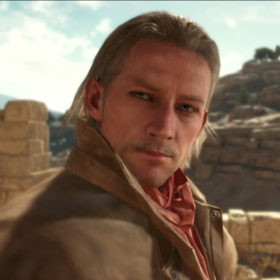 Ocelot is known for his distinctive style of shooting a Single Action Army pistol (which he loves to reload), love of cowboy movies, love of torture, and ridiculous hand gestures. He also apparently works for FOXHOUND, the Sons of Liberty, and the Patriots, but for all we know he actually has an entirely different agenda. Originally a straightforward bad guy, he becomes more sympathetic through his rapport with Big Boss in the prequels.

He is a major fixture of the series, the only character to physically appear in all the numbered Metal Gear Solid games (though, conversely, he's also one of the only major characters to not appear in the original two Metal Gear games). At Shadow Moses, he serves as Liquid's right-hand man, and seems to do the same at the Big Shell. In Metal Gear Solid 3, a young Ocelot appears as Volgin's minion. In Metal Gear Solid 4, Ocelot is a Dragon Ascendant, going now by the name Liquid Ocelot thanks to his replacement arm, stolen from Liquid, taking over his mind. Finally, he appears in Metal Gear Solid V, where he rescues Big Boss on horseback and joins his "Diamond Dogs" mercenary unit. 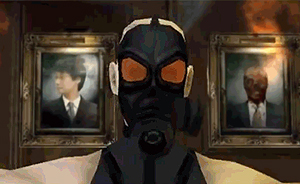 "You're a very methodical man. The kind who always kicks his tires before he leaves."
Click here 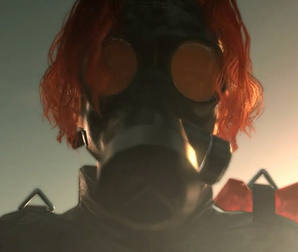 to see Tretij Rebenok in MGSV
Voiced By: Kazuyuki Sogabe (JP), Doug Stone (EN)
AKA: Tretij Rebenok/Third Child
"I never agreed with the Boss's revolution. His dreams of world conquest do not interest me. I just wanted an excuse to kill as many people as I could."

FOXHOUND's psychic member Psycho Mantis was driven insane when he went too deep into a psychopath's mind. Famous for reading the player's memory card and commenting on the games saved on it. 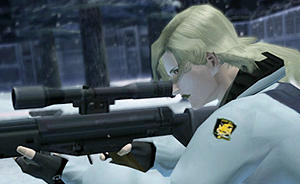 "It's hard to miss when you're this close."
Voiced By: Naoko Nakamura (JP), Tasia Valenza (EN)
"I told you. I never quit the hunt. Now you're mine."

FOXHOUND's Kurd sniper, notable for her ability to stay locked onto a target for as long as it takes until it comes time to pull the trigger. Normally a cold-hearted woman, she nonetheless was kind to the wolfdogs on Shadow Moses and her hostage Hal Emmerich, resulting in Hal's infatuation. Wolf is another disciple of Big Boss, who rescued her from the Middle East as a young girl. 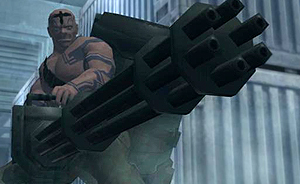 "Rejoice, Snake! Ours will be a glorious battle!"
Voiced By: Yukitoshi Hori (JP), Peter Lurie (EN)
"Yes. The raven on my head, it thirsts for his blood."

FOXHOUND's shaman. He first fights Solid Snake in a tank, then in cold storage with a gatling gun. 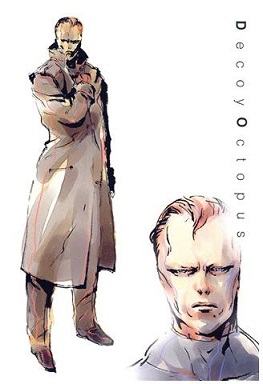 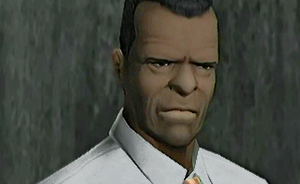 to see his disguise as Donald Anderson
As Donald Anderson: Masaharu Sato (JP), Greg Eagles (EN)
"He drained the Chief's blood and took it into himself. But he wasn't able to deceive the Angel of Death."

FOXHOUND's impersonation expert. Solid Snake never actually sees what he looks like in-game, though a brief flashback shows the pulling off of his mask. Instead Snake sees him when impersonating Donald Anderson, and he dies shortly after. 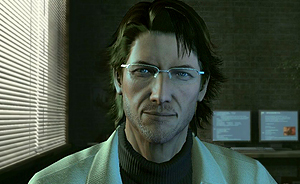 "The private sector's not so bad, is it? Privacy guaranteed."
Voiced by: Hideyuki Tanaka (JP), Christopher Randolph (EN)
"Three generations of Emmerich men. We must have the curse of nuclear weapons written into our DNA."

Computer engineer and part-time hackivist (and full-time Woobie) whom Snake befriends in Alaska. Ashamed of his family's involvement in the Manhattan Project, he chose to pursue his boyhood passion for making robots, only to discover (to his horror) that REX had been outfitted for launching nuclear warheads without his knowledge. He promptly allied himself with Snake in hopes of abolishing Metal Gear. The duo have been presumed dead (several times) by the U.S. government, which freed them up to pursue more clandestine modes of warfare, including Anonymous-style activism and sabotage.

An anime fanboy (so much so that his codename is based off an anime convention), Otacon could not be more unlike his partner. He serves as the 'brain' of the Solid Snake Trilogy. 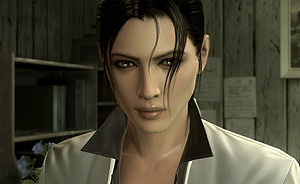 "I'm just surprised you're willing to sacrifice yourself. You've got the genes of a soldier, not a savior."
Voiced by: Hiromi Tsuru (JP), Jennifer Hale (EN)
"I never knew who my parents were or even what they looked like. I guess I got into genetics because I wanted to figure out why I'm the way I am."

A geneticist with a past even she's not completely sure of, Naomi was chosen to support Solid Snake during the Shadow Moses Incident to provide feedback on the Genome Soldiers. She had her own agendas, which included injecting Snake with the biological weapon FOXDIE to kill the FOXHOUND members, which would then kill Snake himself later. It turns out she did it because she was Gray Fox's adopted sister and she wanted revenge (although Liquid also mentions that the Pentagon ordering her to do so had something to do with it).

Naomi returns and redeems herself in the fourth game where she helps Old Snake deal with Liquid Ocelot and forms a close relationship with Hal and Sunny. 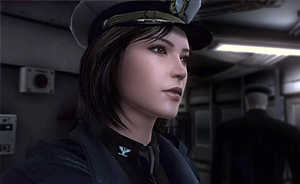 A girl on Snake's Mission Control, she is a teenage prodigy and tech wiz who developed the Soliton Radar and Codec. She frequently quotes proverbs to lift Snake's spirits up. She later becomes a Naval officer in the fourth game.

Ukrainian weapons expert, hired by Campbell and Ames to assist Snake via the Codec. Later on, she recounts the Shadow Moses incident in a tell-all book entitled In the Darkness of Shadow Moses: The Unofficial Truth (which can be read in Metal Gear Solid 2). 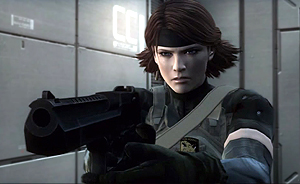 "You're a real bastard, just like my uncle said."
Voiced by: Kyoko Terase (JP), Debi Mae West (EN, MGS1, MGSTTS & MGS4), Vanessa Marshall (MGS2note Reused sound clips of Olga Gurlukovich.)
"I was a fan of FOXHOUND way back. When guys like you and my uncle were in it. None of that gene therapy like there is today. You guys were real heroes."

The niece of Roy Campbell (later revealed to actually be his daughter), Meryl always dreamt of being in the military and living up to her heroes in FOXHOUND, but proves to be less than competent.

She later makes a comeback in Metal Gear Solid 4 and is a lot more competent and tougher. 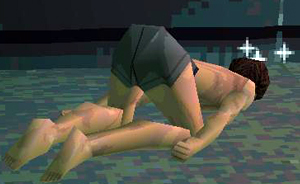 "Achoo! That witch! She took my clothes!"
Click here 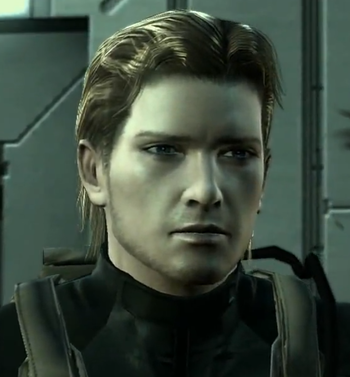 Johnny first appears in Metal Gear Solid as a guard with stomach problems whom Meryl strips and uses his clothes for her escape. His grandfather also served as a guard during the Cold War.

In Metal Gear Solid 4, he becomes a member of Meryl's Rat Patrol Team 01. He loved Meryl ever since she stripped him in Shadow Moses, and ends up marrying her after admitting his love for her.

Kenneth Baker
Voiced By: Yuzuru Fujimoto (JP), Allan Lurie (EN)
"Maybe they're like us in the arms industry. Always looking forward to the next good war."

Former president of ArmsTech, the developer of Metal Gear REX. Solid Snake tries to rescue Baker after he is taken hostage in Shadow Moses, but Baker is killed by the FOXDIE virus before he can divulge any information about REX.

Jim Houseman
The Secretary of Defense, he's mentioned in a throwaway comment by Baker and becomes more important at the very end of the game. He plans to nuke Shadow Moses to keep its secret buried.
Next-Generation Special Forces 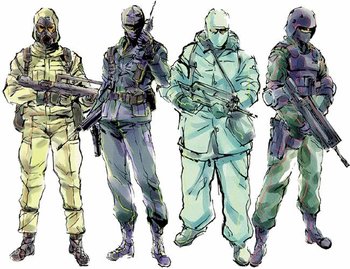 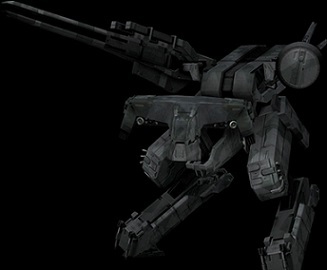 A new Metal Gear under development as a missile defense platform. It's a large bipedal tank like its predecessors, but equipped with a railgun. Said railgun grants it the ability to launch missiles from anywhere in the world with the launch being nigh-undetectable.

In reality, Metal Gear Rex was anything but a deterrent. Its main purpose was to be used as a weapon, with the Shadow Moses facility built as a cover-up for its creation. Its railgun is actually meant to fire nuclear weapons from across the globe, launching them as projectiles rather than ballistic missiles (rendering them virtually impossible to detect by early warning systems), and was going to be used as a weapon from the United States.

It is eventually hijacked by Liquid Snake and the renegade members of FOXHOUND, and is used as a "loaded gun" to bargain with the Administration.