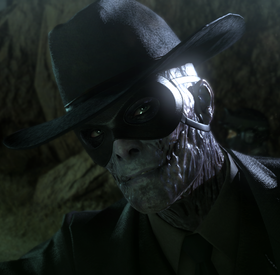 "You hope hatred might someday replace the pain, but it never goes away; it makes a man hideous, inside and out."
AKA: XO, A Ghost without a Past
Voiced by: Takaya Hashi (Japanese), James Horan (English)
"So? Do you see me now? Tell me, what do you see? Hm? You have eyes; what do your eyes see? Yes. That's right, you see a skull face. You see me. This skull is who I am, my mark, my proof of humanity. I have no country, no language. I have no face - but I haven't lost my skull."

An elusive individual with a horrifically scarred face. He claims to have a history with Snake, and seems to have a grudge against the Patriots. He leads the Spec-Ops organization XOF, and is the mastermind behind Camp Omega.

An enigmatic but powerful military organization under Skull Face's command. Several soldiers are seen following Skull Face throughout Camp Omega in the intro to Ground Zeroes, and they serve as primary antagonists in The Phantom Pain later on.
Morpho / Pequod

The pilot that assists Snake throughout Ground Zeroes, and the only back-up that he receives for the various operations he carries out in Camp Omega. In The Phantom Pain, there's a new chopper pilot with the callsign Pequod to fit with the game's Moby Schtick. 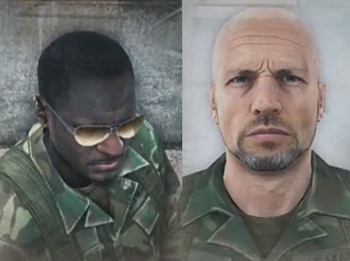 Glaz and Palitz, "the eye" and "the finger", are two U.S. Marines who worked as a sniper-spotter team during the Laotian Civil War

. Miller sends Snake on a tip from the KGB to eliminate them in the Ground Zeroes Side Ops mission "Eliminate the Renegade Threat".

An undercover MSF operative who has been compromised after recovering a cassette tape relating to XOF. Snake and Morpho rescue him from the base in "Intel Operative Extraction." Rescuing him in Ground Zeroes causes him to join Diamond Dogs in The Phantom Pain. He can also be recruited in a special Side-Ops mission if you don't have Ground Zeroes.

Undercover Agent
An American agent planted by the Joint Chiefs of Staff at the Cuban base. Snake is hired by his employers to make contact with him and determine the nature of the base's activities.

If he is recruited by Big Boss, he reappears in The Phantom Pain with the codename "Mad Wallaby".

A prisoner held at the black site during the "Destroy the Anti-Air Emplacements" mission. A member of MSF's Intel team, Kaz dispatched him to gather intel on the facility, only to be caught and forcibly interrogated. He can be rescued by Big Boss, in which case he'll rejoin Diamond Dogs after Mission 12 in "The Phantom Pain" under the codename "Bitter Centipede".

An organisation created by Major Zero, connected to XOF. They would eventually become led by a bunch of AI's that will become The Patriots by Metal Gear Solid 2.

"Love... hurts so bad... / But still... saved my soul..."
Voiced by: Stefanie Joosten (English and Japanese; also does her motion capture)
A Sniper deprived of her Words

A mute sniper with strange powers who works under XOF. After being captured in the field, she becomes a prisoner of Snake and Diamond Dogs. She later joins the PMC's ranks as a field operative, working side-by-side with Snake himself. 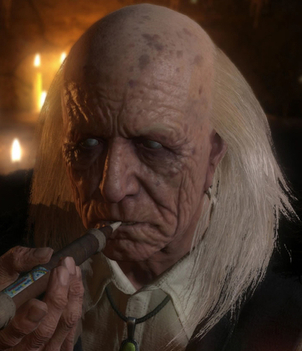 "Since ancient times, every civilization's ruler has had the same idea. When people unite under one will, they become stronger than the sum of their parts. And what do rulers use to bring people together? Language."
AKA: Old Diné, A Wise Man Denied His Homeland
Voiced by: Osamu Saka (Japanese), Jay Tavare (English; also does his motion capture) 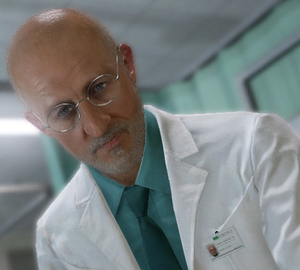 "You've been in a coma for... quite some time. Yes, yes, I know. You'd like to know how long. I'm afraid it's been... nine years."
Voiced by: Hochu Otsuka (JP), Christos Vasilopoulos (EN)
"It's true. There are those who wish you'd never woken up. You should be dead, but you're not. The waves are in motion. Your enemies are everywhere. We must alter your appearance immediately. Otherwise, I fear you won't leave this place alive."

A Cypriot doctor who assists Venom Snake during his coma and when he awakens in 1984. Besides overseeing the fallen soldier's gradual recovery, the doc's job is to feed him vital information whenever possible and (secretly) protect him from the XOF.

The "Man on Fire" 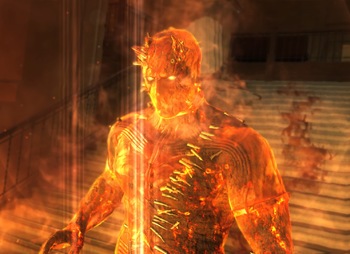 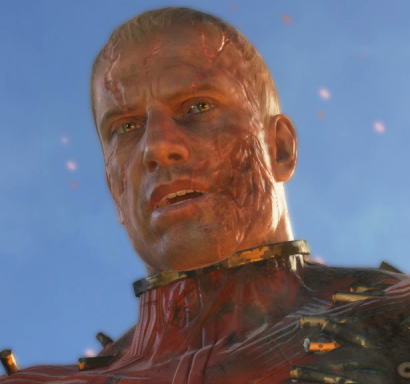 A demonic figure who absorbs kinetic energy and uses it to intensify his own flames. He's attracted to the rage and vengeful feelings of the characters, but is otherwise mindless. Mainly because he's, in fact, Colonel Volgin, who managed to survive his apparent death by lightning bolt and subsequently immolation, albeit in a comatose state. His thirst for revenge against Big Boss, coupled with his body being experimented on by a Russian institute, ultimately revives him under the influence of Tretji Rebenok as the Man on Fire. For tropes related to him when he was still fully alive, see MGS3's character page. 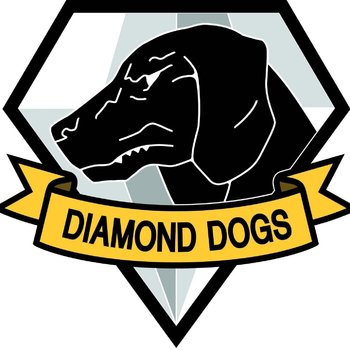 The successor military business and private army of Militaires Sans Frontières, formed by Venom Snake, Kaz Miller, and Ocelot. It was eventually absorbed into the first Outer Heaven.
D-Dog 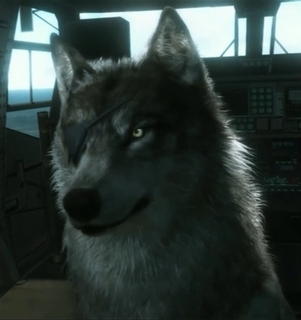 A wolfdog puppy that Venom Snake finds in the wilderness after its mother has been killed. Snake takes him back to base and raises him with help from Ocelot, whereupon he becomes a valuable field asset and companion to the legendary soldier. His main function as a buddy is to automatically mark enemies, prisoners and items as you approach from a distance, making search-and-rescue missions a snap and undoing the problem of blind corners in outposts. He can also be equipped with some small weapons that let him take out enemies or Fulton them on his own. 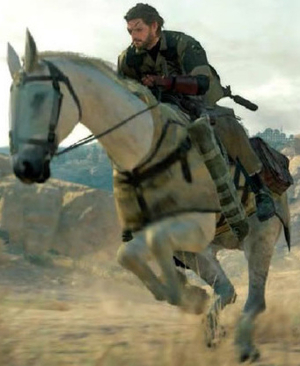 A horse that Snake rides into Afghanistan and can use as a support buddy. 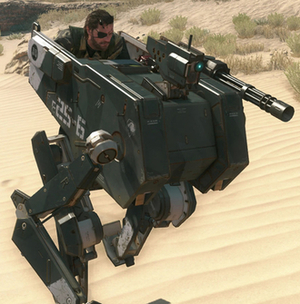 A bipedal robot which Snake can either pilot himself, or set to fight alongside him. 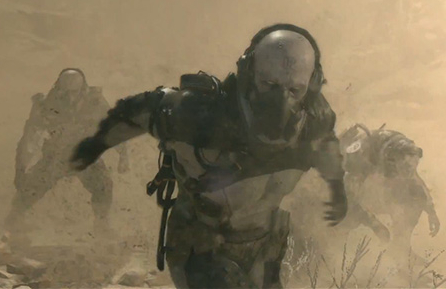 AKA: Those who don't exist

A unit of biologically and technologically enhanced soldiers that hunt down Venom Snake, and are under Skull Face's orders.

A species of parasites that infest the vocal cords and procreate upon being exposed to a specific language. They play a crucial role in Skull Face's Evil Plan.

A related species, "the one that covers," is the source of Quiet's powers, as well as those of the Skulls. 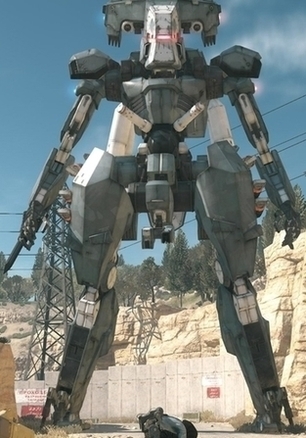 The newest model of the titular Metal Gear following ZEKE, Sahelanthropus is Soviet in design, although it is implied that Huey may have had a hand in its construction. Capable of switching between a hunched over lumbering form (similar to the later REX model), and a massive standing form capable of wielding a nano-fiber whip that summons tectonic spikes upon striking the ground.

Unmarked spoilers in the bios below. Proceed with extreme caution if you have not finished the game yet.
Punished "Venom" Snake 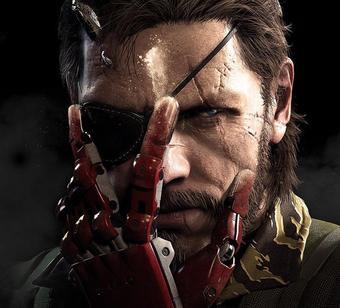 "...I'm already a demon."
AKA: Ahab, Big Boss, V, The Phantom, The Medic
Voiced by: Akio Ohtsuka (JP), Kiefer Sutherland (EN)
"I won't scatter your sorrow to the heartless sea. I will always be with you. Plant your roots in me. I won't see you end as ashes. You're all diamonds."
9 years after falling into a coma at the end of Ground Zeroes, Big Boss awakens to find his left arm has been amputated and the entire world wants him dead. After escaping from the hospital he's being held in, he assumes the codename "Venom Snake" and takes charge of a new mercenary unit called Diamond Dogs to get revenge on the people who took everything from him, no matter the cost.

It is eventually revealed that he was in fact a medic and Big Boss's best MSF soldier, who was on board the chopper during the Ground Zeroes mission and helped extract the bombs from Paz. After suffering horrible injuries protecting Big Boss from an explosion, Cipher performed plastic surgery and memory alteration to make him a Body Double who could throw Skull Face off Big Boss's trail if need be. At the start of The Phantom Pain, Ocelot and Big Boss activate him to serve as a decoy while the original Big Boss begins building the nation of Outer Heaven.