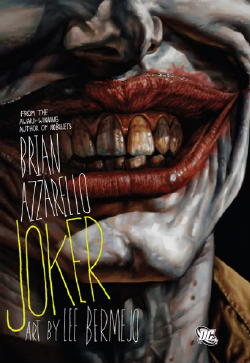 "The Joker has been released from Arkham Asylum."
Advertisement:

Joker is a 2008 one-shot graphic novel written by Brian Azzarello and illustrated by Lee Bermejo, focusing — just like it says on the tin — on the Joker, everyone's favorite Monster Clown. The story is done in a Darker and Edgier, Film Noir style and is told by a naive young criminal named Jonny Frost who yearns to be a big man in Gotham. So when (for reasons nobody seems to know) the Joker is released from Arkham Asylum and sets out to reclaim the city for himself, Frost decides he wants in. Carnage ensues! Along the way, they bump into the Riddler, Two-Face, the Penguin, Killer Croc, Harley Quinn and the B-man himself.

There's a lot of visual similarities between this version of the Joker and the one presented in The Dark Knight; Word of God chalks this down to coincidence. The original title of the comic was even Joker: The Dark Knight (in the same vein as the partnership's previous graphic novel Lex Luthor: Man of Steel, which is a fun companion to this work) but that had to be scrapped for obvious reasons.

If you wanted the page for the character, that's here. See here for the 2019 film.

Batman: Damned is a Stealth Sequel to this story.