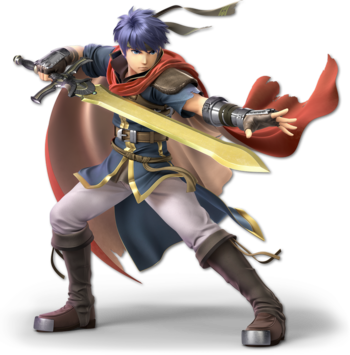 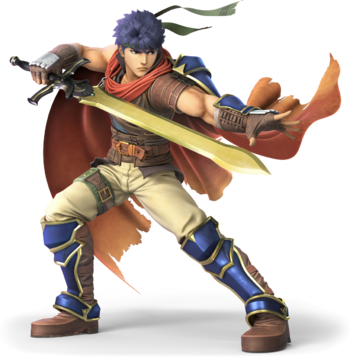 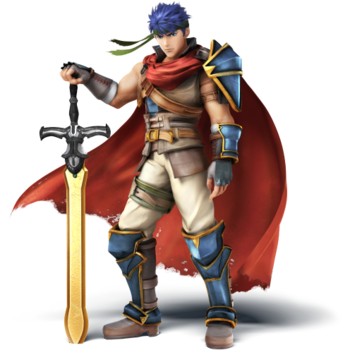 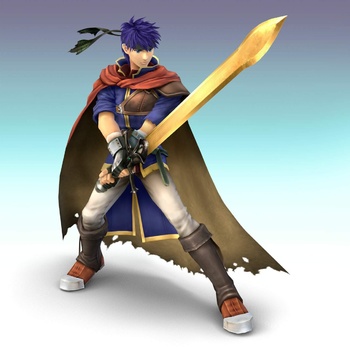 Leader of the Greil Mercenaries, wielder of the legendary blade Ragnell, Radiant Hero of Legend, and Lord from Fire Emblem: Path of Radiance and Fire Emblem: Radiant Dawn. Serving as the leader of the Greil Mercenaries after his father's passing, he's led them through several trials and ended the Mad King's War. Three years later, he would lead his band a second time, ultimately being the one to take down the goddess Ashera.

Despite wielding a sword, Ike is hardly anything like Marth or Roy before him. He wields Ragnell, a two-handed sword, with only one hand; as such, he's a good deal slower and heavier than the others, but a great deal more powerful as a result. His Forward Smash in particular is one of the strongest in the game, but one of the slowest as well, requiring him to read his opponent carefully before acting. Despite his speed issues, you shouldn't underestimate this man, lest you find yourself on the receiving end of an Aether-powered slash.

See Fire Emblem: Path of Radiance - Greil Mercenaries for more information on the character in his origin series.
Pokémon Trainer 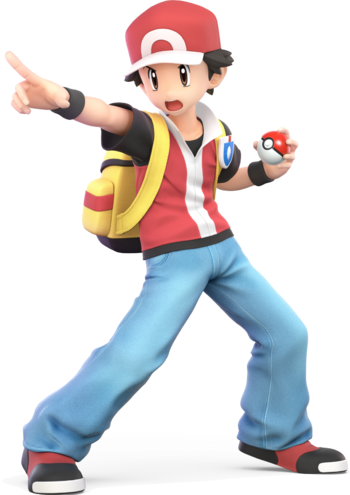 Wants to be the Very Best
Female Pokémon Trainer 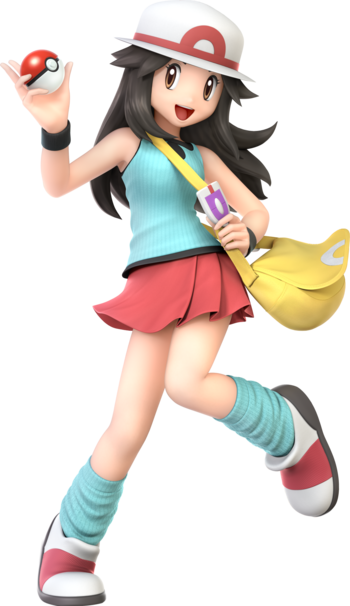 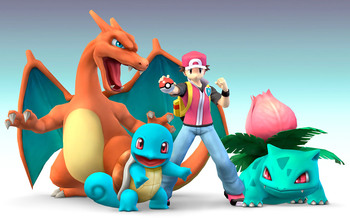 Playable in: Brawl, Ultimate
Final Smash: Triple Finish
"You all did great!"/"Everyone did great!"

While Pikachu may be the Series Mascot of Pokémon, the franchise stood out as not having an actual protagonist playable... until Brawl, when this seemingly generic Pokémon Trainer joined the battle. Hailing from the Kanto region, this Trainer is referred to by the vaguest of terms and comes in male and female varieties. The male Trainer, debuting in Brawl, is one of many incarnations of Red, the protagonist character from the original Pokémon Red and Blue. His outfit is taken from the Game Boy Advance Remakes, Pokémon FireRed and LeafGreen, only with fully voiced dialogue instead of an established name and personality, as he's meant to represent the player character rather than the specific canon character of Red, who appears in different forms across media with different depictions and personalities. Ultimate introduces Leaf, the female trainer from the same remakes, as a costume option.

Rather than fighting directly, this Trainer introduces versions of Kanto's famous Starter Mon trio of Squirtle, Bulbasaur, and Charmander as playable fighters by sending their different evolutionary stages out into battle: Squirtle itself, Bulbasaur's evolved form Ivysaur, and Charmander's final stage Charizard. All three have their own unique properties and special attacks, and can be cycled between at any time by using their down special move. During the trainer's original playable appearance, they came with mechanics that left them weaker to certain attacks and prone to fatigue as an attempt to mirror their series. With the trainer's return in Ultimate, both of these mechanics are removed and the playstyle is more streamlined to make room for more varied combos.

See Pokémon Protagonists and Rivals: Kanto for more information on the character in their origin series.
33 - Squirtle (Zenigame) 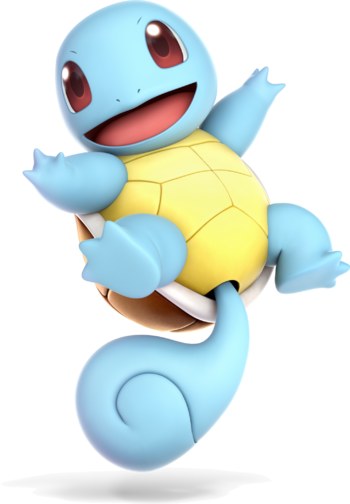 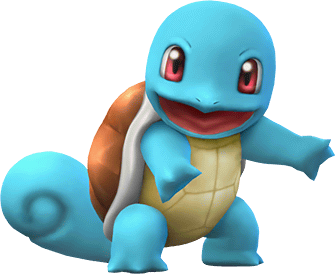 The Tiny Turtle Pokémon and Water-type starter of Kanto. It hides in its shell to protect itself, firing powerful bursts of water from its mouth. Squirtle's line generally indicates a more medium level of difficulty in its debut game, as most major enemies don't have a terribly strong counter to it. In Pokémon media, Squirtle is often depicted as a partner to the Pokémon Trainer's rival Blue or his anime counterpart Gary Oak, but is also known for being Green's Signature Mon in the manga and was later consolidated as one for Leafnote of whom Green may or may not be an incarnation via merchandise.

Squirtle is the smallest and fastest of the three fighters. Its movement and attack speeds are overall greater than the others and, true to Squirtle's usual nature, it also comes with plenty of defensive movement options that can make it good for a quick, effective playstyle.

See Pokémon: Generation I - Bulbasaur to Parasect for more information on the character in their origin series.
Advertisement:
34 – Ivysaur (Fushigisou) 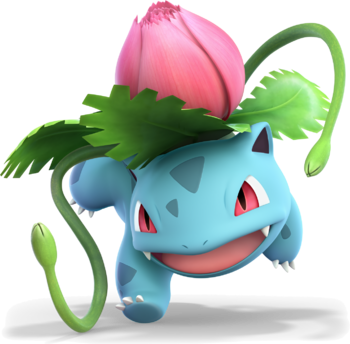 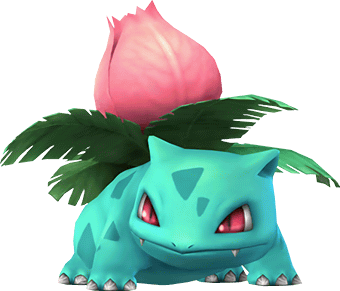 The Seed Pokémon and middle evolution of the Grass-type Kanto starter, Bulbasaur. It's a reptile/amphibian of some sort with a bud on its back that absorbs sunlight to bloom, which it also uses plant-based attacks with. The Bulbasaur line is typically seen as the "easy mode" out of the three starters, as its Grass/Poison typing left it more than capable of dealing with most of the Kanto region's major opponents and makes it immune to the Poisoned status effect. The line as a whole has been depicted as a partner to both Red and Leaf in various continuities, with the most notable example being Red's Saur in Pokémon Adventures.

Fittingly, Ivysaur is in-between the other two fighters in terms of size and weight. It has several ranged options thanks to its vines and other plant-based attacks, giving a balanced option between speed and offense in comparison to Squirtle and Charizard.

See Pokémon: Generation I - Bulbasaur to Parasect for more information on the character in their origin series.
35 – Charizard (Lizardon) 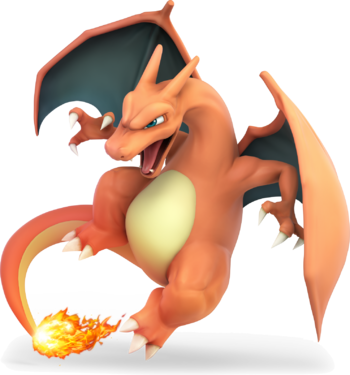 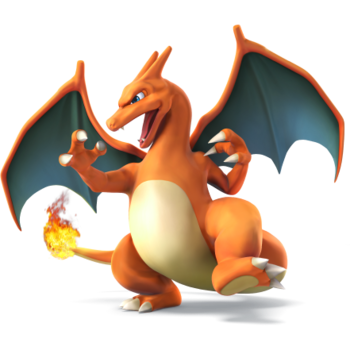 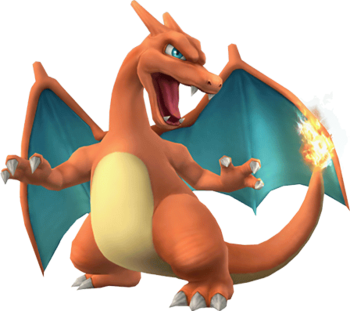 CHARIZARD FIRES IT UP!

The Flame Pokémon and final evolution of the Fire-type Kanto starter, Charmander. It's easily one of the most popular Pokémon next to Pikachu, and has been a key partner to several trainers, including Blue, Ash, Leon, Sebastian, Red (of course), and — thanks to Ultimate — Leaf. Despite being considered the hard mode in the original Red and Blue due to the vast amount of early obstacles its line faces, Charizard is a fearsome fire-breathing dragon-like Pokémon that is always in search of new opponents to battle — and as 3DS/Wii U puts it, where better to find them than in Smash?

Charizard is the brawn of the trainer's team, specializing in slow but powerful attacks that make for excellent finishers when landed. Due to its wings, it serves as one of the faster heavyweight characters, but not by a huge amount. It's not as mobile as Squirtle, or as versatile as Ivysaur, but when you just need that massive amount of damage done, Charizard's your 'mon.

Starting out as a member of Pokémon Trainer's team in Brawl, it makes its solo debut in 3DS/Wii U and gains its powerful Mega Charizard X form as a Super Mode. It would later return to Pokémon Trainer's team in Ultimate, apparently having returned from a bout of disobedience just like Ash's Charizard (though this doesn't explain how the newly-introduced female Trainer uses it).

See Pokémon: Generation I - Bulbasaur to Parasect for more information on the character in their origin series.
36 – Diddy Kong 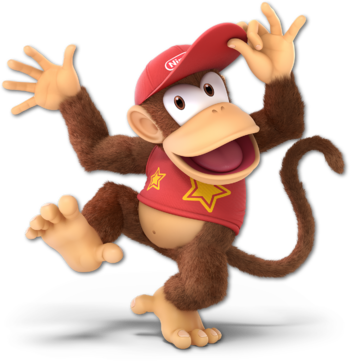 The Acrobat /
Trigger Happy with His Peanut Popgun
3DS/Wii U 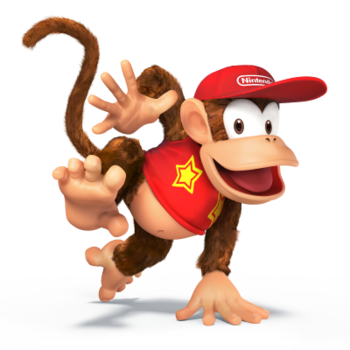 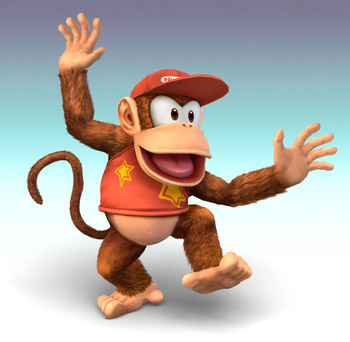 Donkey Kong's little buddy, and at one point co-savior (also being saved himself in one game). Wherever DK goes, Diddy is sure to follow suit.

Diddy is a surprisingly balanced fighter for his size, lending a decent amount of speed in the air and on the ground with quick yet powerful strikes. He also brings his Peanut Popgun and Rocketbarrel Jetpack to the fray for added versatility, and can even set up banana peels to set his opponents up for a nasty fall. When Diddy gets going, he can be quite the tricky opponent to deal with.

Originally created for Donkey Kong Country by Rare, Diddy was the sole playable character in Smash Bros. to not have been created by a Japanese company, until Dark Samus, King K. Rool, Banjo & Kazooie, and Steve/Alex joined the roster.

See Donkey Kong: Kongs for more information on the character in his origin series.
37 – Lucas 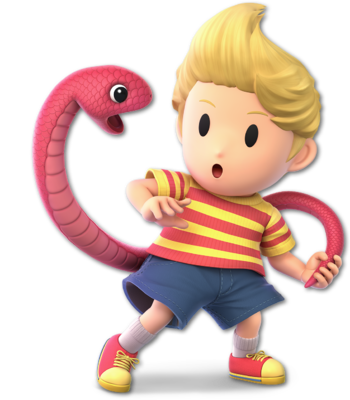 Boy from Nowhere /
The Tazmilian Devil
3DS/Wii U 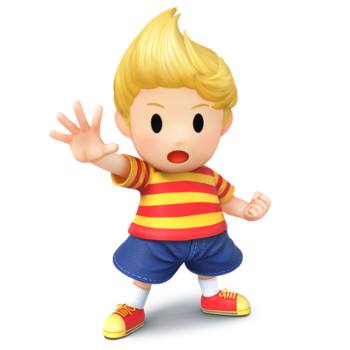 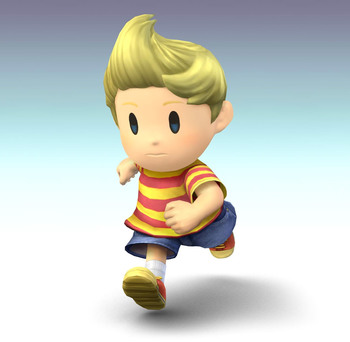 LUCAS COMES OUT OF NOWHERE!

The youngest of a set of twins from MOTHER 3, Lucas is a kind but timid boy from the Nowhere Islands. After his mother died and his brother went missing, he took it upon himself to stop the evil Pigmask Army, pull the seven needles, and befriend the Dark Dragon.

Like Ness, he comes with an assortment of everyday items (though it's just a stick) and powerful PSI abilities, this time taught by his ally, Kumatora. Lucas is just as unconventional as Ness, though a little bit easier to use as most of his attacks come out faster and deal a little bit more knockback. He also comes with his own tether grab in the form of the Rope Snake, borrowed from his other ally, Duster. Despite Lucas's overall weaker disposition, he still makes do with his abilities and manages to make a name for himself while overcoming his own anxieties. And after initially missing out on the very next installment, Lucas returns to the series as DLC, now more confident than ever.

See the Mother 3 character page for more information on the character in his origin series.
38 – Sonic 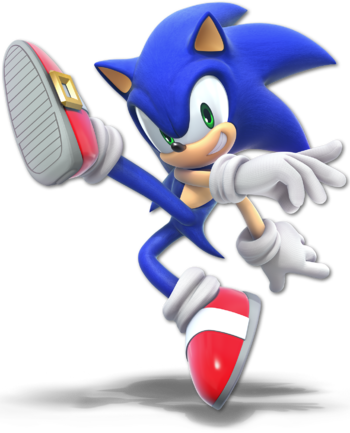 The Blue Blur /
Speed is His Game
3DS/Wii U 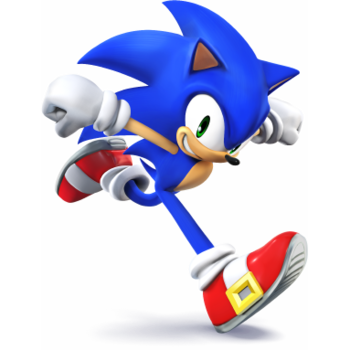 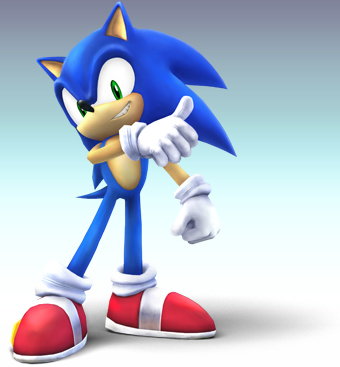 Sega's mascot, Mario's former metafictional rival, and the protagonist of the Sonic the Hedgehog series. A resident of South Island, Sonic and his friends have stopped the plans of the ever-persistent Dr. Eggman/Robotnik on numerous occasions. He has defeated several other villains, including gods, in his home series, and now he's joined Smash to show you just what he's made of.

Predictably, he's the fastest character in Super Smash Bros. without question. So much so, in fact, that he can outmaneuver everyone else on the roster. In addition, all of his attacks come out quick and can deal a decent amount of damage when landed, and he's full of evasive tactics in the forms of his special attacks that can get Sonic out of a jam when needed. As a downside, the hedgehog is rather weak in the defensive department, being easily KO'd if you're careless. That being said, utilizing Sonic's abilities to their fullest will make even scraping the Blue Blur an ordeal.

See Sonic's page for more information on the character in his origin series.
Advertisement:
39 – King Dedede 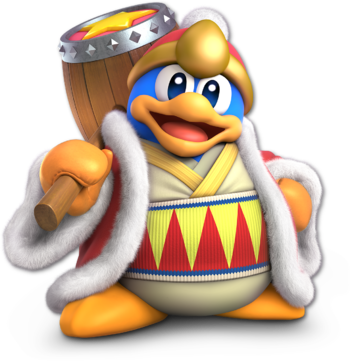 Self-Made King /
The King of Dream Land /
Says He's King, and That's That
3DS/Wii U 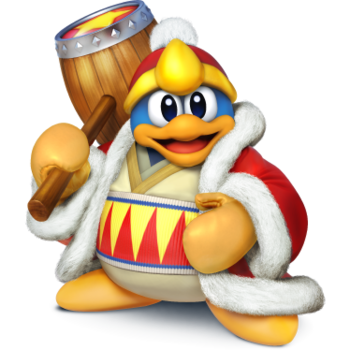 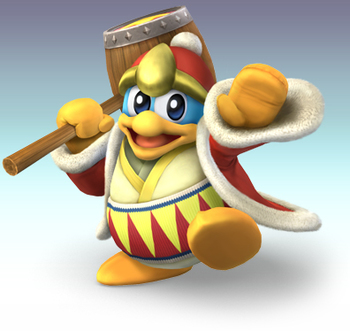 Kirby's on-again off-again rival and the (self-proclaimed) king of Dream Land. Although King Dedede is greedy and gluttonous, he is not all bad and has helped Kirby save Dream Land many times against many powerful foes. He possesses many of the same abilities as Kirby, including his inhaling and floating abilities, and brings his trusty Dedede Hammer into the fight.

He is an "already perfect" example of a Mighty Glacier, being far too heavy to be launched easily, with great range on his attacks courtesy of his hammer and multiple jumps of his own, but slow mobility to compensate. Though Dedede's attacks can be used against him like in his boss fights, he's still capable of turning his own bad situations back around through proper timing with his powerful hammer swings. Despite his heavy nature, Dedede's attacks can provide a surprising amount of utility under the correct circumstances, punishing those that play it safe.

See Kirby - Kirby & Friends for more information on the character in his origin series.