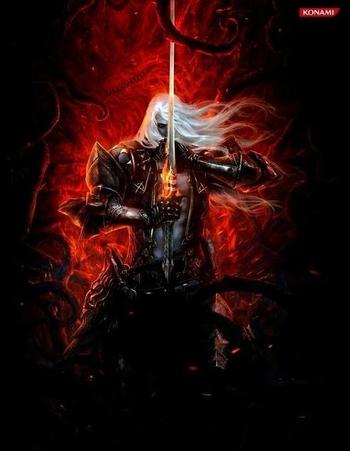 "It seems fate has given me a second chance... father."
"You fight well... worthy of the name Belmont."
— Dracula
Advertisement:

The game starts 25 years after the main events of Lords of Shadow, when Dracula returns after decades of self-exile to destroy his former allies in the Brotherhood of Light and take the world for himself. Trevor Belmont, son of Gabriel and a knight of the Brotherhood of Light, sets out to avenge the death of his mother at Dracula's hands. However, he is never heard from again.

Years later, it falls to Trevor's own son, Simon Belmont, to finish what his father started and free his clan from the curse of Dracula. But the truth of that curse is even more terrible than Simon knows...

An HD version of the game was released for Xbox 360 on October 22, 2013, and on PlayStation 3 a week later. It includes a Boss Rush mode, online leaderboards, a more consistent framerate and redone cutscenes with lip synch (the original 3DS version had no mouth movement when characters were talking, only different expressions). A PC port of the HD version was released in March of 2014.

Mirror of Fate provides examples of: