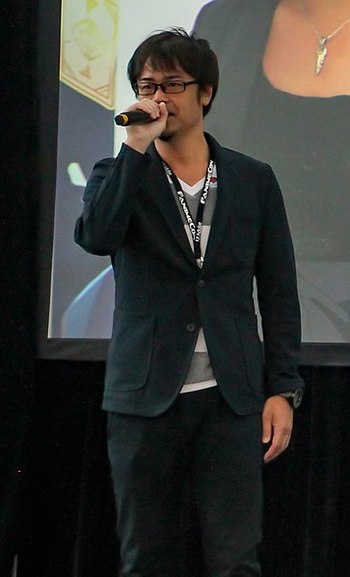 Hideo Ishikawa (born December 13, 1969) is one of the more veteran seiyuus who has quite a range in his voice, ranging from stoic badassery, or goofy and light-hearted roles. Most known as Auron, Itachi and later Squall.

He has admitted that it's been rather hard for him to do more high-pitched voices after voicing Auron since, after that role, he's landed with oh-so-many low-voiced roles. He admits that it's hard to go back to being high-voiced, but considering how light-hearted (though not THAT high-voiced) his character Jushirou Ukitake is, looks like he still has it going.

He was also in a band with Shin-ichiro Miki called ROST, specifically made for the Rockman soundtrack.

If there's a role in an anime, then it's a seiyuu's job to voice it!

...You done typing?
B-but I just wanted you to be described!
Then go type to a wall, Booby! I have dinosaurs to punch.
How about that? These guys are good for something after all!