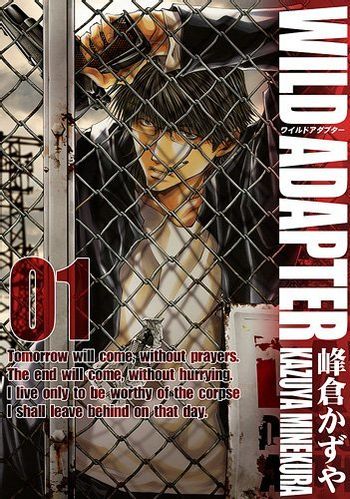 2013 Japanese re-release
"The more human we become...the more animalistic we are."
—Ryunosuke Akutagawa, Words of a Dwarf, quoted in chapter two.

The series originally ran from 2000 to 2008 in Chara. It went on hiatus after forty-six chapters due to Kazuya Minekura's health, as well as Creative Differences between the seinen tone of the series and the magazine's shounen-ai demographic. It was collected in six volumes (with five chapters left over), translated by Tokyopop in North America and Chuang Yi in Singapore. In 2011 the rights to the series were acquired by Ichijinsha (home of Saiyuki), and irregular serialisation resumed in Zero Sum Ward in 2013. An OVA of volume six was released in 2014.

Volume 7 was released in Japan in July 2015, after a seven-year hiatus.

Episodes of Wild Adapter provide examples of (spoilers ahead):