This character sheet is for the main special non-playable characters of the Animal Crossing franchise. 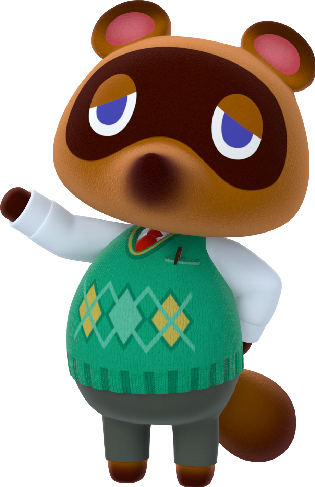 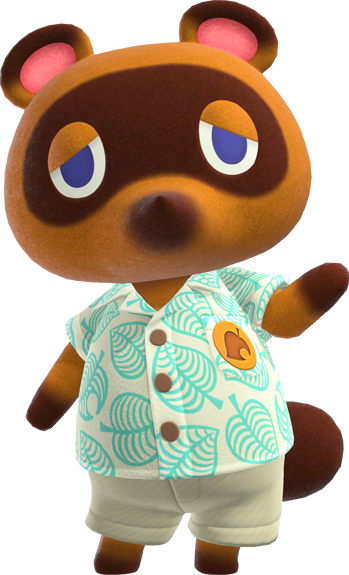 The owner of the town's main shop, and a tanuki/raccoon. He sells you your house and collects your mortgage, as well as being your main source of income; you get Bells by selling things to him. In New Leaf, he focuses exclusively on real estate, selling players upgrades and remodeling services. In New Horizons, he leads a travel agency that runs a getaway to a deserted island, then starts a new civilization on the island with the people he brings with him, running the island's resident services. 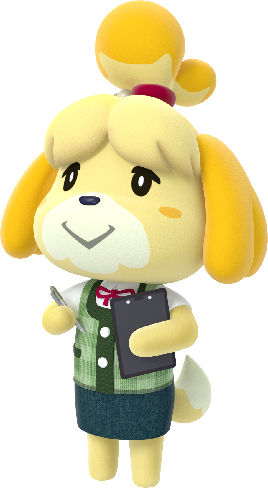 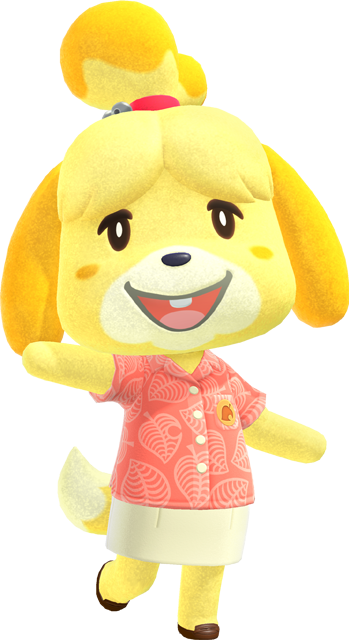 Introduced in New Leaf, she's a Shih Tzu who introduces you to the town and becomes your secretary. In New Horizons, she moves to your island after the Resident Services building is constructed, assisting Tom Nook by running the service's Civic Consultation Counter and taking over daily announcements from him.
Blathers
Blathers (Fuuta) 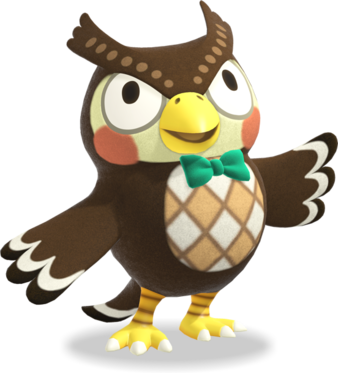 This owl runs the museum in town, and is its primary curator. Though friendly and intelligent, he has a noted tendency for sleeping on the job... and being really, really freaked out by bugs. He was first introduced in Animal Forest+, the Japanese port of the N64 original. 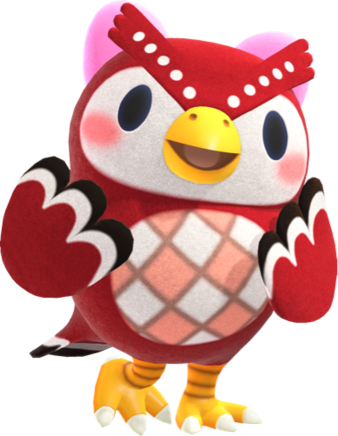 Blathers's younger sister was first introduced in Wild World. She is a bit absent-minded, but very cute. She runs the museum's Observatory in the second and third games, and handles the museum's gift shop and personal exhibits in New Leaf. In New Horizons, she appears on nights with meteor showers to stargaze and give you recipes for constellation-themed items. 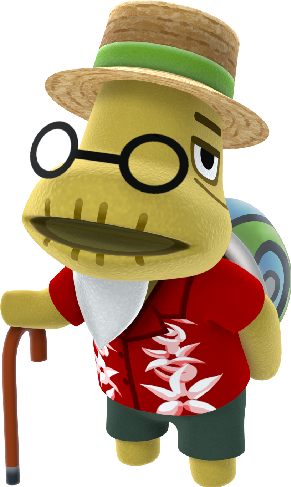 The town's mayor is a goofy old tortoise with eccentric mannerisms and a taste for a good party. He's a bit lazy unless there's a special event going on, though. In New Leaf, he's retired from his post and now organizes and runs tours on the island. First introduced in Animal Forest +, the Japanese port of the N64 original. 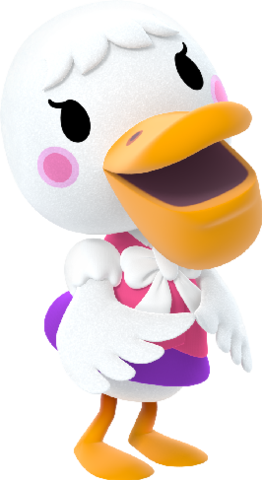 One of the two pelican receptionists at the town hall, she works in the daytime. Her sister Phyllis works at night. She has an unrequited crush on the mailbird, Pete. 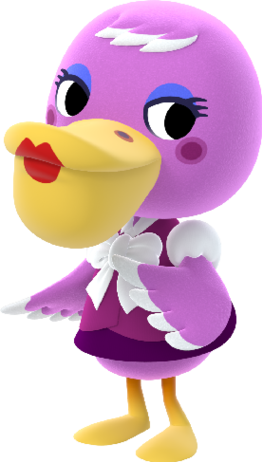 Pelly's older sister. In contrast to her outgoing sister, she's grumpy and cynical. Maybe it's because she always works the graveyard shift. She and Pete are a bit of an item. 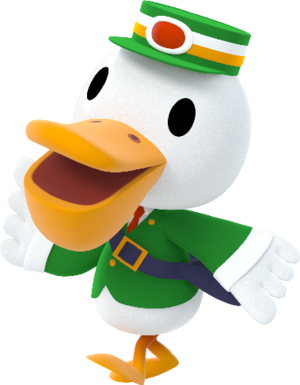 The mailbird. While difficult to meet directly, if you get on at just the right time, he'll speak with you. In the first game, he's somewhat bitter and aloof. In the later games, though, he's just stressed. 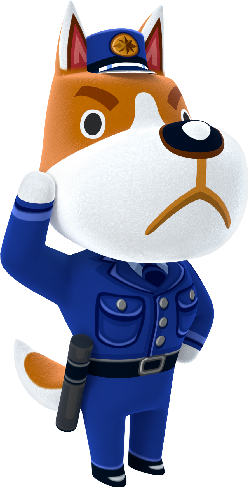 In the first game, he and his partner, Booker, are policedogs who notify you of happenings and run the lost and found. In the second and third games, they're city guards instead, helping you with Wi-Fi things as well as the above. In New Leaf they're back to their original role, except that only one of them can work in a town at a time.
Advertisement:
Booker
Booker (Policeman B; Original games and New Leaf) (Gatekeeper A; Wild World and City Folk 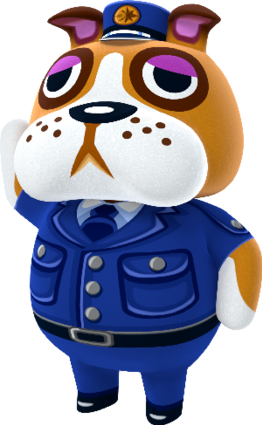 Copper's partner is significantly less outgoing than his superior. He still runs the Lost and Found for you, though.

Shopkeepers and Other Businesses 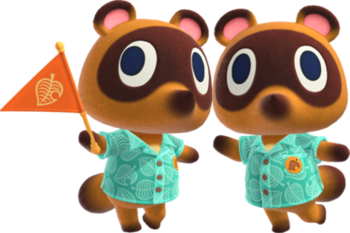 Twin young tanuki that work in the upper levels of Nookington's. Starting in New Leaf, they run the general stores, while Tom pivots to real estate.
Sable
Sable (Asami)

The oldest Able Sister, she's a quiet hedgehog who doesn't talk much. She runs the Able Sister shops, which sell patterns, and, in later games, clothing and accessories. She spends most of her time at the sewing machine. But with a little talk, she opens up... First introduced in Animal Forest+, the Japanese port of the N64 original. 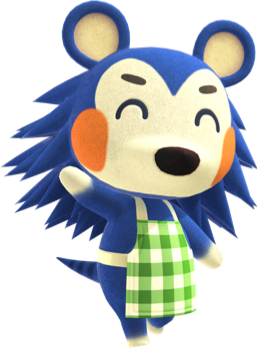 The youngest Able Sister, she greets customers at the Able Sister's shop and handles the transactions, and is a perky, open sort. First introduced in Animal Forest+, the Japanese port of the N64 original. 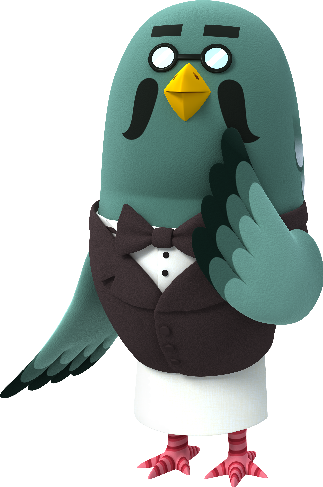 First introduced in Wild World, he runs the coffee shop beneath the museum. He's a quiet one, but he makes a mean cup of coffee. He came from the city — if you couldn't tell, him being a pigeon and all. 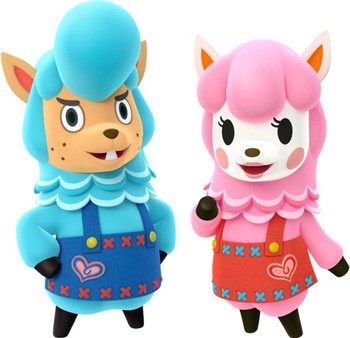 Introduced in New Leaf, they are the alpacas that manage Re-Tail. Reese buys items from you while Cyrus is an upholsterer who can customize your furniture.
Digby
Digby (Kent) 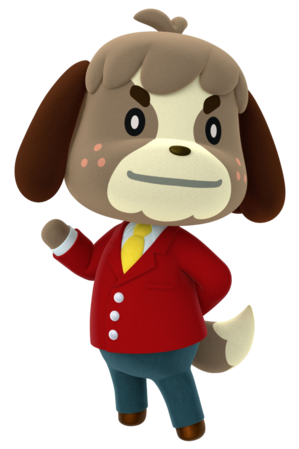 Introduced in New Leaf, he's a dog that's in charge of the Happy Home Showcase in your town. He is Isabelle's twin brother.
Luna
Luna (Yumemi) 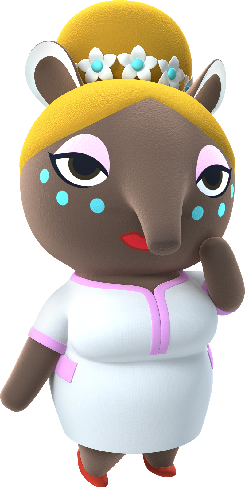 Introduced in New Leaf, she's a tapir who runs the Dream Suite once you've built it in your town. She can let you visit the towns of other players through Spotpass.
Leif
Leif (Reiji) 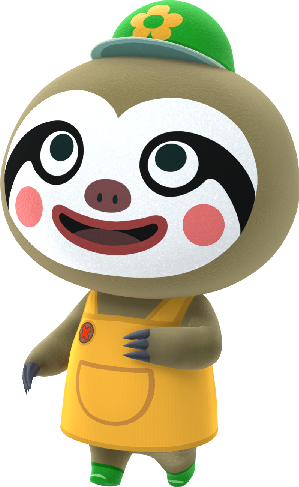 Introduced in New Leaf, he's a sloth who runs the Gardening Center. His shop is integrated into the Nooklings' store starting at the T.I.Y. expansion, and he will start offering weed-pulling services at this point. He is also host of the special holiday Weeding Day, which is on the last Friday in April for North America and Europe and September 3rd for Japan, dedicated to removing weeds from town. In New Horizons, where he was added in the game's 1.2.0 update for Nature Day (Earth Day), he visits the island to sell shrubs and non-native flowers and he will also buy weeds off the player for twice their value (which is normally just ten Bells each, but still).
Lottie
Lottie (Takumi) 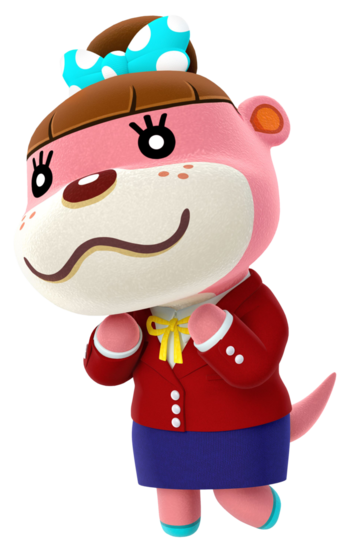 The only new character introduced in Happy Home Designer, she's a pink river otter who happens to be Lyle's niece. She's very passionate about her job as a Happy Home Consultant and has a crush on Digby.
Harvey
Harvey (Paniel) 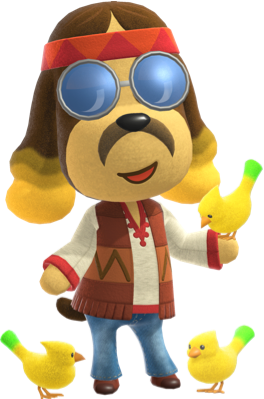 A character introduced in New Leaf's Welcome amiibo update. He's a dog that runs an R.V campground that's in a new area of your town. He also sells items that aren't found in the other stores, but he only accepts MEOW (Mutual Exchange Of Wealth) coupons that are dispensed by the CAT Machine (Coupon Allocation Terminal). The campers who come to Harvey's campground range from minor characters like Wendell and Gulliver, Holiday characters in the off season, villagers who haven't been seen in New Leaf and even villagers who are inspired by other Nintendo franchises like Splatoon or The Legend of Zelda. In New Horizons, he runs Photopia, a photo studio on a private island where visitors can set up scenes and take pictures in his cabin, using any furniture or outfits from their catalog and using amiibo cards to hire "actors" to pose in them.
Orville and Wilbur
Orville and Wilbur (Mōrī and Rodorī) 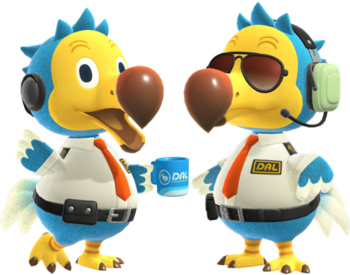 To the left Orville, to the right Wilbur
Introduced in New Horizons, Orville and Wilbur are a pair of dodo brothers who run Dodo Airlines and manage the player's airport.
Feedback