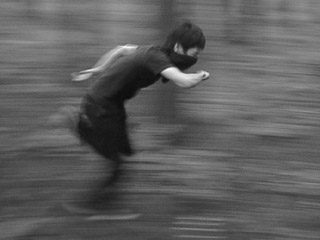 Dramatic recreation; as of this point, no photograph of a ninja in the wild exists.
"Since they don't have a human's muscular system, it's actually efficient for these gals to run NINJA STYLE. Unlike actual humans and/or narutos."
— Kiwi Blitz, page 226

Related to Airplane Arms. The standard Ninja Run is this:

If the ninja carries a blade while running like this, it is always held in a Reverse Grip.