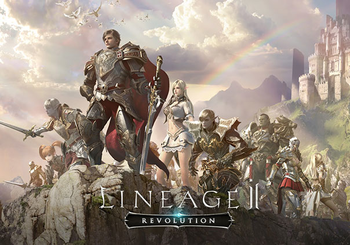 "Gran Kain shouted with great pride to all the world and instilled spirit into the creatures of his own image. However, the result was terrible. His creatures were weak, stupid, sly, and cowardly. All the other gods despised Gran Kain's creatures. Overcome by the shame of his failure, Gran Kain abandoned his creatures and went into hiding for a time. These creatures are called humans."
Advertisement:

But later... "So. Is it not ironic that the lowest creatures of all, the humans, ultimately attained ownership of the land? But that is the result of human will. Even the gods did not imagine that humans would ever become rulers of the earth."

A MMORPG by NC Soft and sequel to Lineage . Not as well known as World of Warcraft but enough to get someone to list its tropes. This game is the template that started the infamous Korean MMO bandwagon rolling rather than WoW and the majority of MMOs from that country have mechanics similar to those still used by LII rather than picking up the changes Blizzard made to its own game.