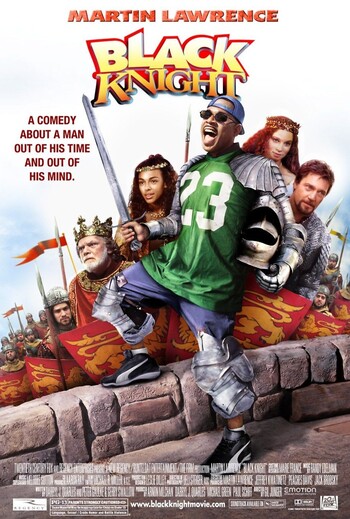 He's about to get medieval on you.
Advertisement:

Black Knight is a 2001 comedy directed by Gil Junger, starring Martin Lawrence as a slacker named Jamal Walker who works at a crappy theme park called Medieval World, which is about to be put out of business by a much higher-rated Castle World. While cleaning the moat, Jamal spots a golden necklace and, trying to reach it, falls in the water. He finds himself a Fish out of Temporal Water in Medieval England, although it takes him some time to realize that the castle he finds himself in is not Castle World.

Jamal accidentally passes himself off as the messenger from the Duke of Normandy, who seeks to marry King Leo's daughter and secure an alliance. After finally figuring out that he's actually in The Dung Ages, Jamal decides to play along lest he lose his head. Not long after, Jamal meets Victoria, a black servant girl; she turns out to be working for La Résistance, whose goal is to kill Leo and restore the deposed queen to her rightful throne. As King Leo quickly befriends Jamal, he finds himself caught between both sides. Not surprisingly, Hilarity Ensues.