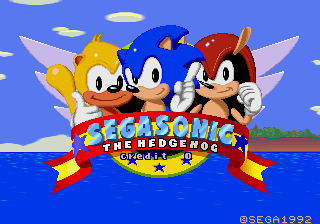 SegaSonic the Hedgehog is Sonic the Hedgehog's first Arcade Game (not counting his appearance as an inanimate object in Rad Mobile, or the also-Japan-only Waku Waku Sonic Patrol Car kiddie ride), released in 1993. 1 to 3 players can choose between Sonic and his friends, Ray the Flying Squirrel and Mighty the Armadillo, to escape from Eggman Island while the doctor sends all sorts of traps to run over them. As a unique element, character movement was handled via a trackball instead of the typical joystick, allowing the player to maneuver the characters in a very fluid fashion (a precursor to analog controls). However this trackball system has also resulted in issues bringing this game out in any other form.

The objective of each level is to get away from whatever is chasing you while dodging thematic obstacles and trying to collect as many rings as possible since they recover HP, give you a health bonus if you collect more than 50% of them and are also the only things that increase the score.

This is also the first Sonic game (alongside Sonic the Hedgehog CD) to have voice acting and dialogue for the characters. The game has never seen a release outside of Japan (even though there is English text and sprites to suggest localization was meant to happen). Sonic's companions from this game faded into obscurity following this gamenote Although Mighty was hastily inserted into Knuckles Chaotix by editing a Sonic sprite from a prototype of the game for concerns of attaching Sonic himself to a game on a platform (the 32X) Sega didn't have a lot of confidence in until 2018's Sonic Mania Plus, where they were added as additional playable characters with a more diverse moveset than they had in this game.