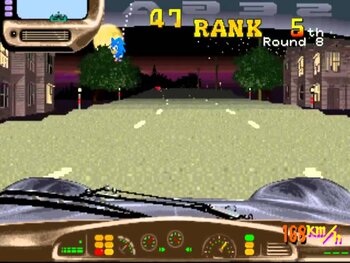 Rad Mobile is a 1991 arcade racing game by Sega. Your goal is to complete the course through the places of the United States before the timer runs out. It's also notable for being technically the debut of famed Sonic the Hedgehog, who appears as a figurine hanging on the top.

Rad Mobile received a couple of updated re-releases. It was followed by Rad Rally at the same year, and Gale Racer released in 1994 on Sega Saturn. Unlike OutRun and Hang-On, though, none of these games were remotely as popular, so they're mostly remembered as little more than historical interest nowadays.