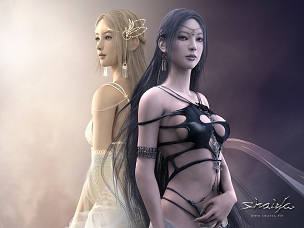 Shaiya is a free Korean-made MMORPG. Its story involves a battle between two primary factions: the Alliance of Light, composed of Humans and Elves, and the Union of Fury, composed of the Nordein, a.k.a. Deatheaters, Proud Warrior Race Guys extraordinaire, and the Vail, which are similar in a lot of ways to the Elves but have a touch of the vampire about them.

Unlike some of the other games out there, PVP is set up a little differently in Shaiya. The primary action in Shaiya is PVE, but you can request a battle with another character and then duel it out with them, or you can go to one of Shaiya's PVP zones and throw in for your faction against the other in a ferocious battle, defending your relic against the opposing faction and trying to destroy the relic of the other side.

The classes of Shaiya:
Advertisement:

In addition, characters in Shaiya can unlock different modes of difficulty. If you can get to level 40 in Normal Mode, which is recommended as your starting level, Hard Mode opens up. Hard Mode allows you more character points upon level-up and grants you more skills, which makes your character more powerful overall, and you get to equip better items, but leveling is harder in this mode than in Normal Mode. Getting to level 40 in Hard Mode opens up Ultimate mode. Ultimate Mode is the same as Hard Mode in regards to leveling, but you get the most character points, can use all the skills, and can equip the best items. But Ultimate Mode has a downside — if you die and you are not resurrected within three minutes, your character is deleted.

Shaiya can be found on the Aeria Games website here