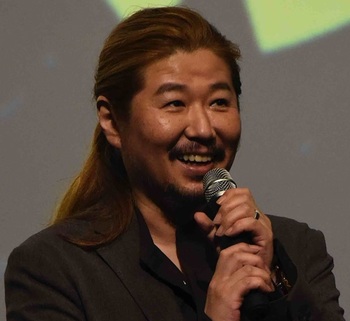 Also written as "Yuuji Ueda" in romaji, he's one of the more veteran voice actors made famous thanks to Love Hina, Rurouni Kenshin and Martian Successor Nadesico.

Yuji Ueda (born June 15, 1967) in the past, was well-known for this screaming raspy voice that was iconic to a ton of his young boy characters... that is until he showed what he could do in later roles, which makes him very hard to pigeonhole.

While mostly he plays rather soft and fitting for simpleton characters who are really down to their luck with his aforementioned iconic rasp, he can even occasionally voice boisterous Hot-Blooded men who have some deep-raspy voices, or even at times he can sound like a high-pitched utter psycho. Let's just say he can even have he voices all over the place (Blanka as one blatant example compared to his other roles).

Not related in any way with Kana Ueda. And NOT to be confused with Yoji Ueda.

Also notable in that next to seiyuu like Wataru Takagi, Toshiyuki Morikawa and Takeshi Aono, Ueda had done A LOT of voice work in Capcom's old games.

Some of Yuji Ueda's most notable roles: