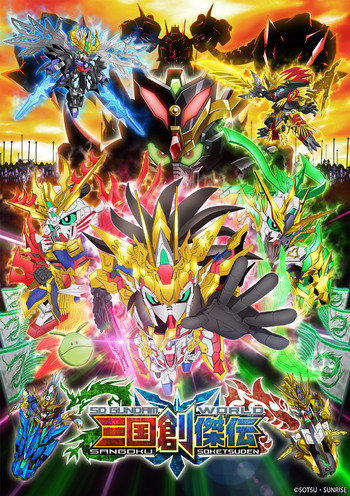 The first entry in the SD Gundam World series, SD Gundam World Sangoku Soketsuden (SDガンダムワールド 三国創傑伝) is a multi-media project made to celebrate the 40th Anniversary of Gundam.

Just when the world was close to reviving itself after a devastating war, a deadly epidemic known as the "Etiolation Trinity" begins to emerge. Said epidemic drives Mobile Civilians mad and turns them into mindless berserkers, forcing survivors to hide themselves in fortified cities, dividing the world into three countries; Shu Area, Wei Area, and Wu Area. Three warriors Liu Bei Unicorn Gundam, Guan Yu Nu Gundam and Zhang Fei God Gundam meet each other and decide to work together to save the world.

Like BB Senshi Sangokuden, Sangoku Soketsuden derives on Romance of the Three Kingdoms for its setting and characters, however the two works have nothing to do with each other.

The net anime started airing on July 26, 2019, and ended on March 25, 2021. It was directed by Takahiro Ikezoe (Sword Gai: The Animation, Show by Rock!!), and each episode originally had a schedule of releasing on "the 4th Friday of every month", before it got delayed for a year presumably to avoid any connection with the COVID-19 Pandemic outbreaking at the time. It returned on March 18, 2021, with the last two episodes airing the week after.

There's also two comic series, both released in April 2019 and available on the official website. One is titled "SD Gundam World Sangoku Soketsuden: Soshoki" (Drawn by Luk Mo Shek and launched on April 10. Also serialized in Explorer Publishing's monthly Hong Kong magazine Lucky, and releases new chapters on "every 10th of the month" both on the website and as a Motion Comic.), while the other is "SD Gundam World Sangoku Soketsuden: Enkotan" (Drawn by Naoto Tsushima, and launched on April 19. Releases new chapters "monthly every 3rd Friday".). Soshoki focuses on Cao Cao Wing Gundam, while Enkotan focuses on Sun Jian Gundam Astray, and Takuya Yamanaka is in charge of the story for both comics.