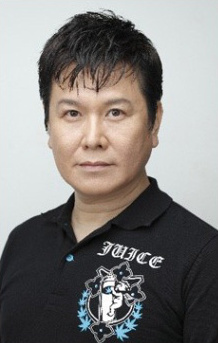 Yūji Mitsuya is an actor, seiyū, and sound supervisor born in 1954 and affiliated with Bring Up. After graduating from the famous Meiji University, he took up voice acting, and had the good luck to debut in a main role: Hyouma Aoi from Combattler V.

Mitsuya's roles are pretty different in nature. The aforementioned Hyouma was The Hero and a Badass Biker, but you might remember him much more as Virgo Shaka from Saint Seiya or Dr. Tofu Ono from Ranma ½. He's also quite a recurrent face in foreign dubbing, being the Japanese dub voice of Marty McFly in Back to the Future and Jack in Will & Grace. And last but not least, he's one of the few male seiyūs with Cross-Dressing Voices... at least in the case of some tough old ladies.

Nowadays, he is training many rookies to become seiyuus and also has hosted several seiyuu-related shows. His first pupil was Shunsuke Kazama.

He came out as gay

in 2017, a breakthrough for LGBT celebrities in Japan.