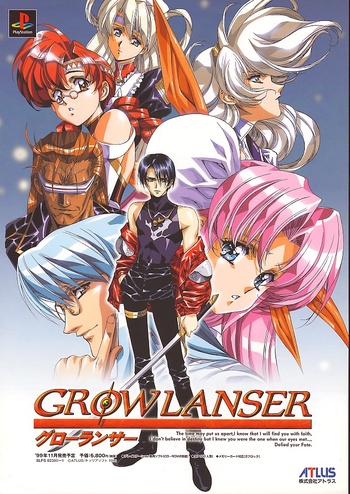 Growlanser (グローランサー Gurōransā) is a series of Role-Playing Games with installments on the PlayStation, PlayStation 2, and PSP. The first three games in the series are set in a world that is being taken over by an ancient evil, with the latter three branching off into their own continuities.

The core gameplay straddles the line between a "normal" RPG and a Strategy RPG - you wander around with a party consisting of typically four to five people (though sometimes you'll have an NPC in a "bonus slot"), go through dungeons, fight monsters and the like.

The first big difference comes in with the combat - combat is handled in real-time, with menu-based commands pausing the action for a moment while you issue new orders to your teammates. There is a certain amount of delay after performing an action, or before casting a spell, represented by a bar beneath the party portraits. The second is in the "set pieces" - rather than just a bunch of boss fights, many of the plot-important combats are large, swirling melees with objectives and even extra allied units, similar to what you find in a strategy RPG... but you still only have direct control over your party. You can buff and assist your allies, but not command them. With its visuals consisting of high-res pre-rendered overhead maps combined with sprites and anime-style FMV, some have summed it up as "Japan's answer to Baldur's Gate".

The series was the creation of Career Soft, with publishing duties handled by Atlus Co. in Japan; Atlus eventually acquired Career Soft outright, and many of the staff went on to, tellingly, work on Persona 3 and Persona 4 as well as the Devil Survivor games. Working Designs published Growlanser II: The Sense of Justice and Growlanser III: The Dual Darkness in North America together in a package called Growlanser: Generations.note Of note is the fact that WD initially wanted to sell the games separately but was strongarmed by Sony America into selling them as one unit; the delays in packaging them together, along with the massively reduced revenue-per-unit, is blamed for significantly contributing to WD's demise. Growlanser V: Generations was published in North America under the name Growlanser: Heritage of War by Atlus USA. Growlanser IV: Over reloaded, a PSP remake of Growlanser IV, was released by Atlus USA under the title Growlanser: Wayfarer of Time on July 31, 2012. All titles feature game art by Satoshi Urushihara.

Had a CrossOver with several other games in Chaos Wars. Is also the spiritual successor to Langrisser.