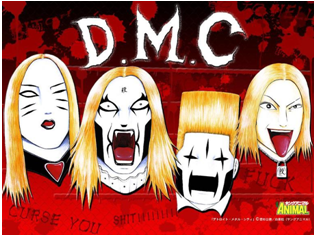 Detroit Metal City is an anime/manga series about the life of Souichi Negishi, a young man who makes a living as a musician. He is very successful, but not in the genre of his dreams: while he loves to play relaxing music, his job demands that he play groove/thrash metal in the titular band as "Demon King Johannes Krauser II". Most of the story revolves around Negishi trying to balance being Krauser II, his love life, and his family responsibilities, with mostly hilarious results.

The title is a reference to the KISS song, "Detroit Rock City". The manga was written by Kiminori Wakasugi and was serialized from 2005 to 2010 in the magazine Young Animal. An OVA, developed by Hiroshi Nagahama and animated by Studio 4°C, was given twelve episodes in 2008. A live action film, directed by Toshio Lee, premiered fifteen days after the OVA.

Not to be confused with that Metal City, nor with the similarly-abbreviated Devil May Cry, or with Run–D.M.C. for that matter.

Tropes murdered and brought back from hell:

Tropes carved to the Live-Action Adaptation: