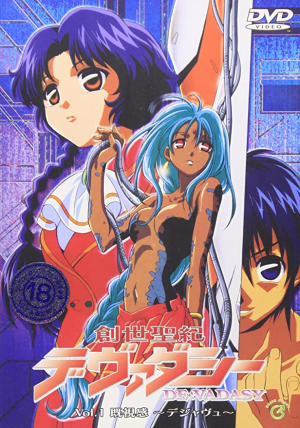 In 2012, the Earth is besieged by monstrous, gigantic aliens, against which a mecha project named Devadasy, developed by international organization SPIRITS, is the only possible defense. Said mecha units can only be piloted by pairs of teenagers, and are directly powered by the pilots' sexual energy and feelings. This is what bored 16 years old Kei Anno finds when he leaves Tokyo to enlist in SPIRITS along with childhood friend Naoki Matsudo. However, upon arriving, he also meets a mysterious beauty with blue hair and dark skin, Amara Minakushi, whom he feels a powerful connection with. Kei and Amara would pilot Devadasy together in order to fight off the menace and discover some ancient secrets.

Any similarities with Neon Genesis Evangelion are certainly not coincidental.

An OVA adaptation was produced along the game and released some months later. It's a Compressed Adaptation serving as a prologue to the story.