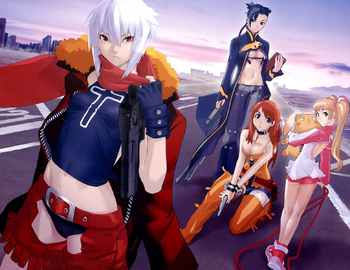 From left to right: Jo, Sei, Meg and Amy
Burst Angel, also known as Bakuretsu Tenshi, takes place in Japan in a not-too-distant future. A rise in criminal activity after a devastating earthquake has forced the Japanese government to legalize firearms for citizens to use in self-defense as well as establishing the Recently Armed Police Taskforce (RAPT), to hunt down criminals with lethal force.
Advertisement:

The series follows an Amazon Brigade of mercenaries called Bailan, who have recently hired Ordinary High-School Student Kyohei Tachibana as their cook. The team's missions put them against mutated monsters with glowing brains, Humongous Mecha with glowing brains, and a corrupt RAPT (which is, naturally, involved with the whole "glowing brains" issue).

Notable for being directed by Koichi Ohata, although it shares relatively little of the qualities of his other (in)famous works.