This page is for King Bowser Koopa, the Big Bad of the Super Mario Bros. franchise. 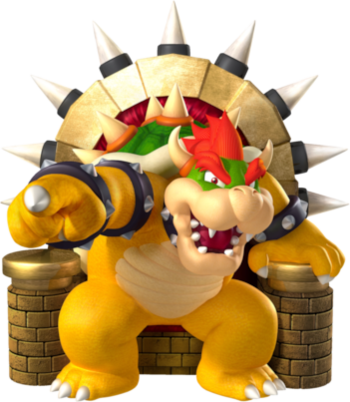 The Evil Overlord. The self-proclaimed king of awesome. The mighty tyrant who inspired so many more to follow his stead. The only villain who can go on go-kart races with his nemesis and get away with it. The biggest, baddest reptile of all, and he'll let no one forget it.

The Big Bad of gaming. THE Final Boss.

The King of the Koopas.

The Big Bad of the franchise, Bowser constantly comes up with various schemes and plots to either defeat the Mario Bros., capture Princess Peach, take over the Mushroom Kingdom (or the world or the universe), or all three at the same time. Unfortunately for him, almost all of his plans fail due to the interference of the Mario Bros.

Bowser has varied a lot throughout the years, from a simple conqueror from another kingdom, a funny villain, a threat to the entire universe, or playing games with his supposed arch-enemy.

For his younger self Baby Bowser see here.

Example of:
Villain in a White Suit