Various enemies of Mario and company who are not associated with the Koopa Kingdom. 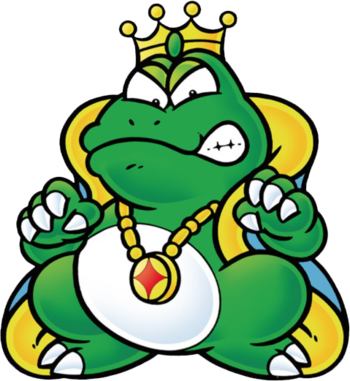 The villain of Doki Doki Panic and the Dolled-Up Super Mario Bros. 2 (and little more than a blip on the radar since then). Wart is a big, nasty toad-like creature who took over the dream world with an army of Shy Guys and various monsters spawned from the stolen Dream Machine. This was undone thanks to Wart's allergy to turnips and onions. 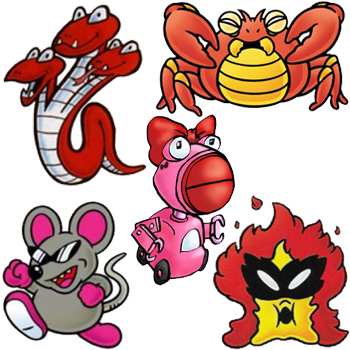 Wart's followers in Doki Doki Panic and the Dolled-Up Super Mario Bros. 2. The rank and file are simple Shy Guys and their variants (like Snifits and Beezos) led by subordinates such as Mouser, Tryclyde, and Fryguy. Like Wart, the three leaders have never appeared in another game since, although they did reappear as minions for Bowser in The Super Mario Bros. Super Show! and Valiant's Nintendo Comics System. The Shy Guys, on the other hand, continue to pop up as common enemies in the Mushroom Kingdom. Robirdo is a boss exclusive to Super Mario Advance, the Game Boy Advance port of the game. 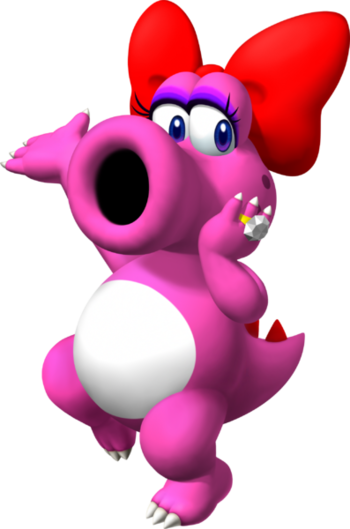 A prehistoric creature fought several times by Mario and friends. Birdo (known as Catherine in Japan) is almost never seen without a distinctive pink ribbon, and has the power to spit projectile eggs out of her mouth. The original instruction booklet from the 80's notes that Birdo is male but believes to be female, though later game localizations tend to go back-and-forth. Nowadays Birdo occasionally shows up in the Mario Kart and Mario sports games, where she's usually paired off with Yoshi. 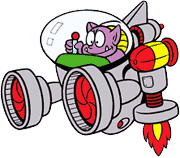 Tatanga the Mysterious Spaceman is a little purple alien who flies around in his own personal battleship, the Pagosu. He first appeared in Super Mario Land, in which he kidnapped Princess Daisy of Sarasaland and hypnotized her subjects. He was defeated by Mario, but he made one more appearance, this time guarding one of Wario's six golden coins. When Mario returned to the Mushroom Kingdom, he found it overtaken by Wario and was forced to take on Tatanga yet again. The spaceman hasn't been seen since.

A sphinx creature who lives in the pyramid. Breathes fire. 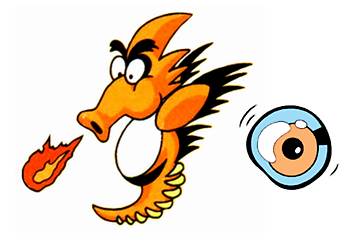 A seahorse at the end of the submarine level. It's accompanied by Tamao, a ball of protoplasm or something.

A moai head with cool shades who hurls boulders at Mario. 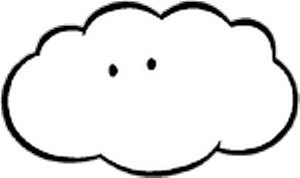 A cloud that shoots birds at you in the airplane level. 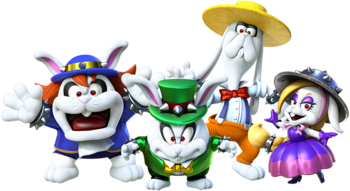 A villainous group of wedding planner rabbits hired by Bowser to make sure his planned marriage to Peach goes smoothly and without interference from Mario. They're led by Topper, and their boss is Madame Broode, who they even modeled their airship after. 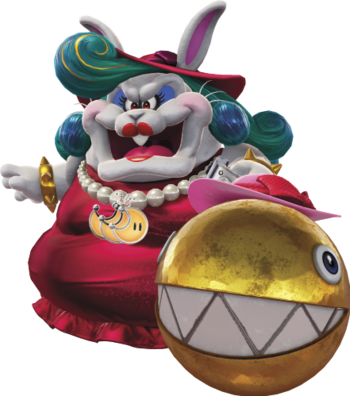 "Why, I could never part with any of my precious Power Moons!"
Debut: Super Mario Odyssey

The boss of the Broodals. Unlike her subordinates, who are very dedicated to planning the wedding and gathering the necessary items for it, Madame Broode seems to care more for collecting Power Moons. 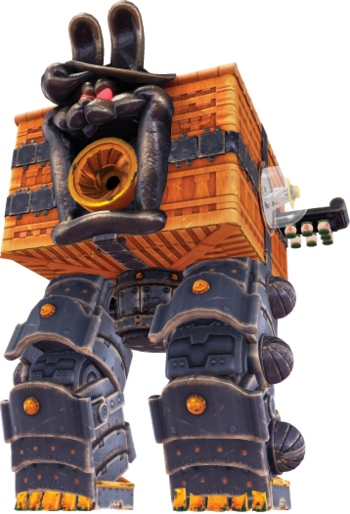 A giant wooden robot walker piloted by all four Broodals. 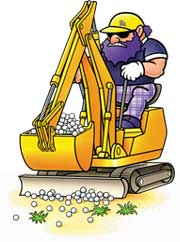 The very first true villain the Mario Bros. fought (Donkey Kong being more of an Anti-Villain), Spike was the Big Bad of Wrecking Crew. He would impede their demolition progress on the regular stages and try to beat them on the Bonus stages. He reappeared in the Japan-only Wrecking Crew '98, where he teamed up with the younger Bowser to defeat Mario, and in the also Japan-only Mobile Golf entry in the Mario Golf series. After 17 years of absence, he finally returns in Super Mario Maker as one of the 99 Mystery Suits that Mario can transform into.

Not to be confused with the Spike enemies that debuted in Super Mario Bros. 3 or with Lakilester's nickname from Paper Mario 64. 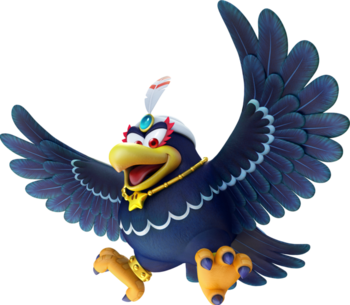 A huge, magical, black bird wearing a turban. Wingo loves shiny things, and he has his eye on Power Stars. When Captain Toad and Toadette found one while adventuring one day, Wingo swooped in and snatched it away, along with Toadette. It's now up to Captain Toad to track him down and get them back. 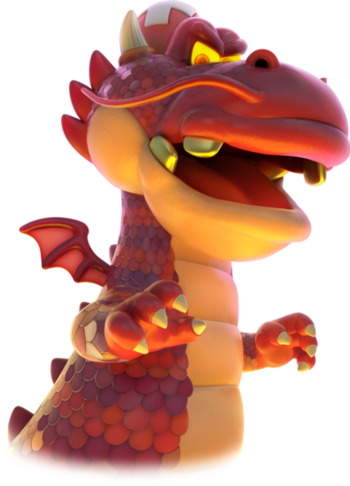 A big red dragon who lives inside the lava-filled Pyropuff Peak. Captain Toad, and later on, Toadette ended up wandering inside his domain. 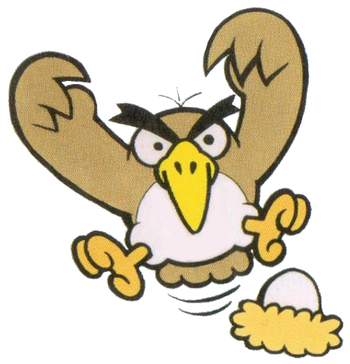 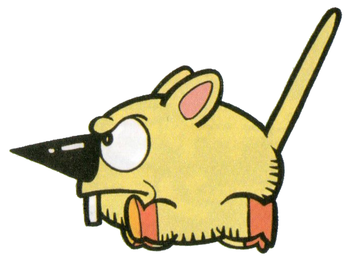 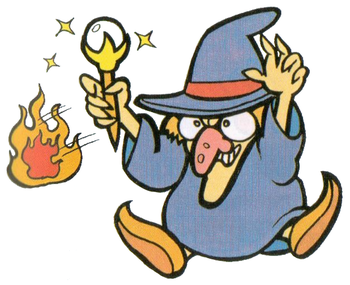 Tropes associated with the Witch: 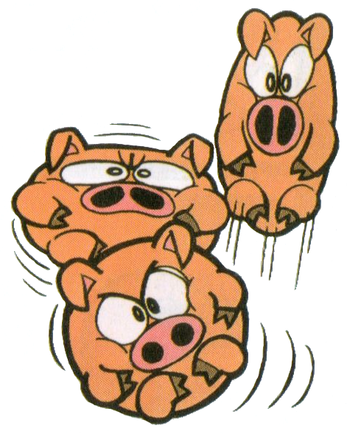 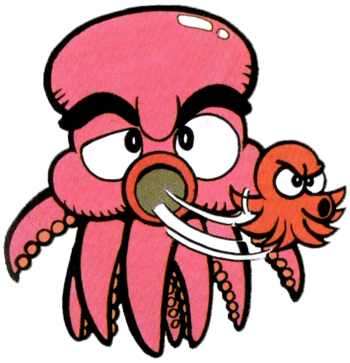 Tropes associated with the octopus: 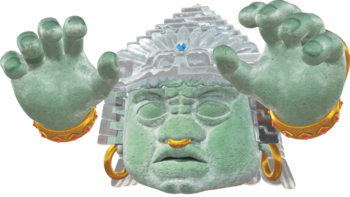 A giant idol statue who fights Mario in the Sand Kingdom. He protects its treasure, the Binding Band, and mistakes Mario for its thief. 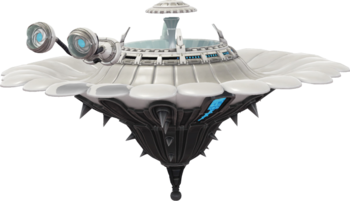 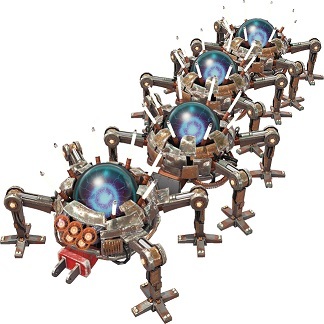 A giant mechanical bug menacing New Donk City by draining its power from the top of City Hall. 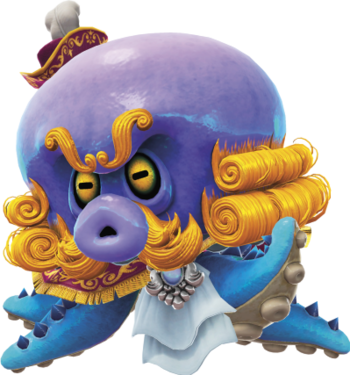 "Owie-wee! Try all you want, I will never surrender the delicious Sparkle Water!"

A giant octopus threatening the Seaside Kingdom's water supply from the top of its Glass Palace. 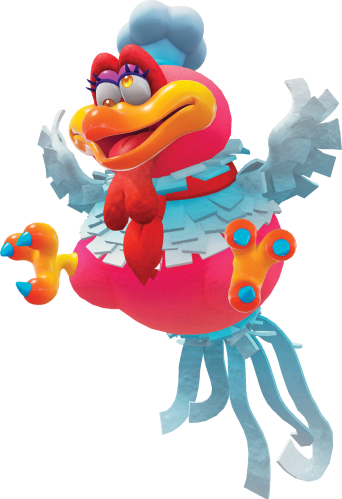 A giant bird chef causing trouble at Mount Volbono, holding up the Luncheon Kingdom's Cooking Carnival by taking over their stew operations.

Ruined Dragon (A.K.A. Lord of Lightning) 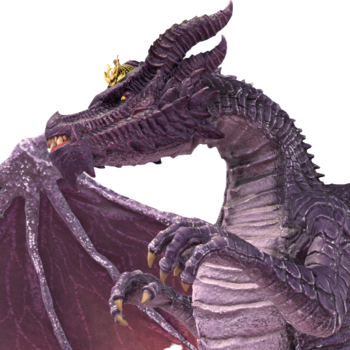 A boss sent to fight Mario and derail his journey by Bowser, and the only living thing left in the Ruined Kingdom.