The Turtle Empire that rivals the Mushroom Kingdom. Led by King Bowser, they serve as the primary antagonists of the franchise. 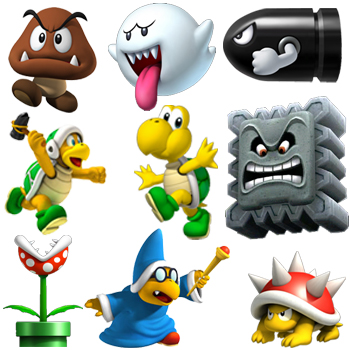 Bowser's loyal legion of minions, the Koopa Troop (also known as the Turtle Tribe, Koopa clan or just the Koopa) is countless strong and made up not only of Koopa Troopas but also Goombas, Piranha Plants, Spinies, Bob-ombs, Bullet Bills, and other assorted baddies. Most of them aren't that bad, though; they just have a nasty boss.

A race of anthropomorphic turtles. Bowser's primary subjects, the Koopas include numerous variants. Their shells seem to be articles of clothing rather than part of their anatomy. Debut: Super Mario Bros. (or Mario Bros., as Shellcreepers were conceptually prototypical Koopa Troopas). 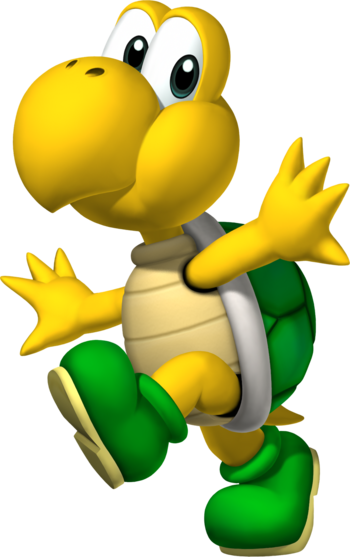 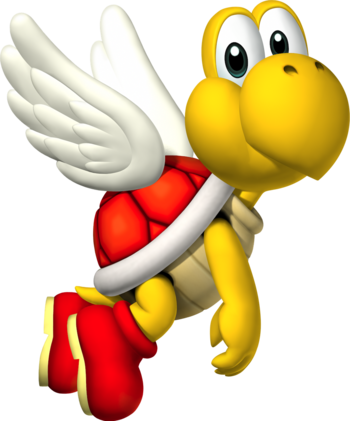 Ordinary Koopas who are Bowser's rank and file alongside the Goombas. Whilst their shells are extremely tough, allowing them to survive Mario's stomps, Koopa Troopas are otherwise weak soldiers. Their shells can be removed or used as projectiles, most famously in the Mario Kart series. Koopa Paratroopas are winged Koopa Troopas, who are able to hop around or outright fly but become regular Koopas if jumped on. They typically appear in green (stalwart soldiers who will follow their assigned routes come bottomless pits or high water) and red (brainy types who will pull a smart about-face at cliff edges); other colors appear much more rarely. Debut: Super Mario Bros. 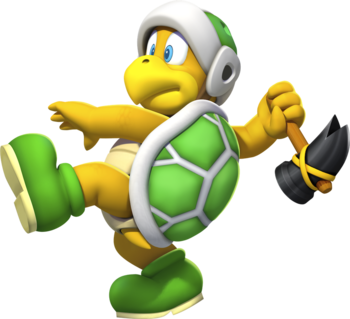 Beaked Koopas who attack by throwing hammers. They have a bunch of subvariants such as Boomerang, Fire, Ice and Sledge Bros. Debut: Super Mario Bros.
Lakitus 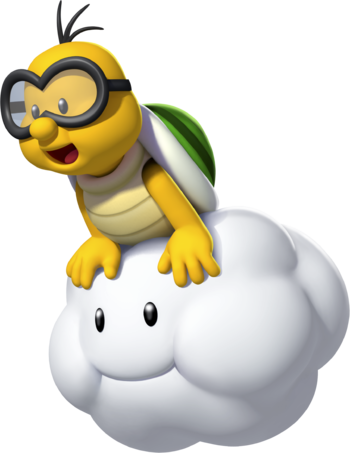 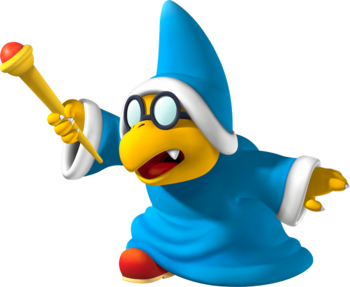 Koopas dressed in wizard garb that are able to use magic. Kamek is considered the leader of the Magikoopas. They're usually treated as very high-ranking members of the Troop; Bowser's personal advisers are very often Magikoopas. Debut: Super Mario World. 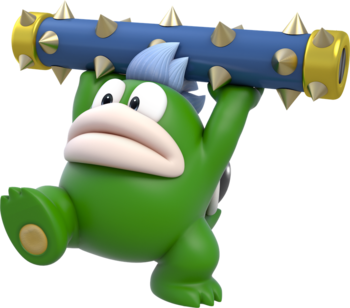 Stout, mohawked Koopas with small shells and big lips, Spikes attack by pulling spiked balls (or sometimes bars) out of their mouths, hefting them over their heads and tossing them at Mario. When holding their spiked objects high, they often become immune to jump attacks. Spikes were used very sporadically after their original appearance, but have become much more commonly seen since their inclusion in the New Super Mario Bros. games. Debut: Super Mario Bros. 3. 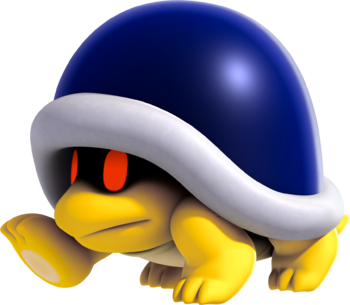 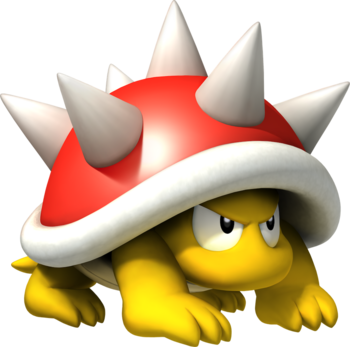 Quadrupedal turtles with spiky shells, which Mario cannot jump on. They're often associated with Lakitus, which attack Mario by throwing Spiny eggs at him. In remakes of the original Mario Bros. arcade game, they replace the original Shellcreepers. Debut: Super Mario Bros. 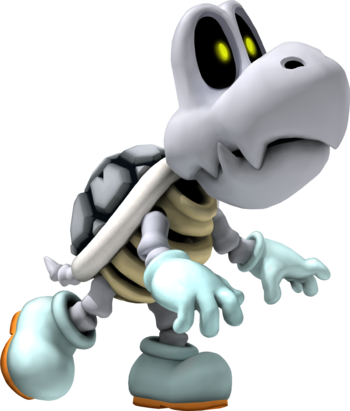 Skeletal Koopa Troopas that come back to life not long after being stomped. They usually stay in castles, but are also found in deserts. Debut: Super Mario Bros. 3. 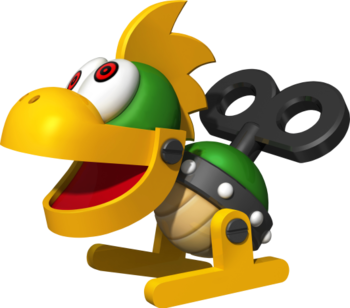 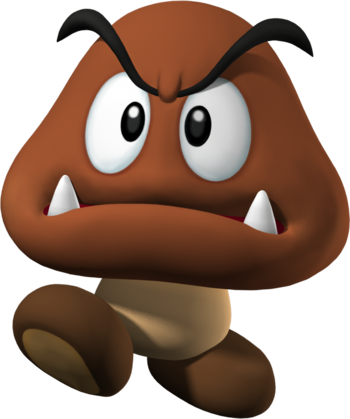 These guys are the worst. Not only are they pathetic soldiers, but they're traitors to boot! These armless shiitake mushrooms with Big Ol' Eyebrows once served the Mushroom Kingdom, but defected to Bowser. Debut: Super Mario Bros. 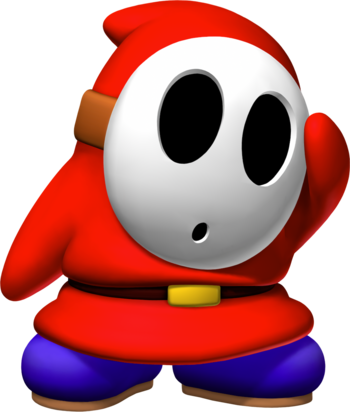 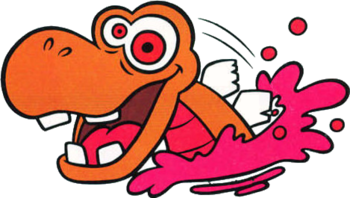 A Blarrg from Super Mario World 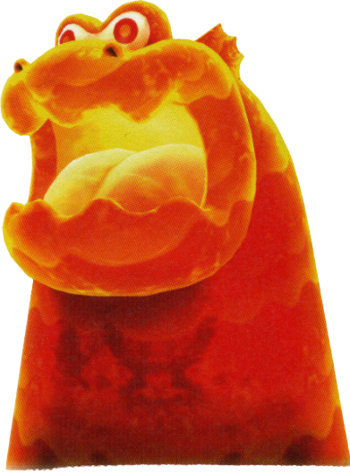 A Magmaargh from Super Mario Galaxy 2

Blarrgs are an enemy type from early platformers, particularly the Yoshi games, founding hiding inside lava pools and which would surge out when Mario or Yoshi passes by and attempt to devour them. Magmaarghs, derivative enemies with largely identical behavior, take their place in modern platform titles. Debut: Super Mario World (Blarggs), Super Mario Galaxy 2 (Magmaarghs). 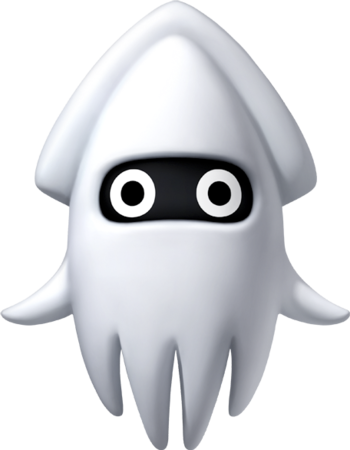 Squid who aggressively chase Mario and co. In some games, they can shoot out ink. Debut: Super Mario Bros. 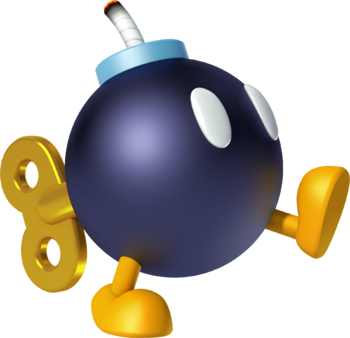 Walking wind-up bombs that explode when they get close to Mario. In the RPGs, they can usually reform after blowing up. Debut: Doki Doki Panic. 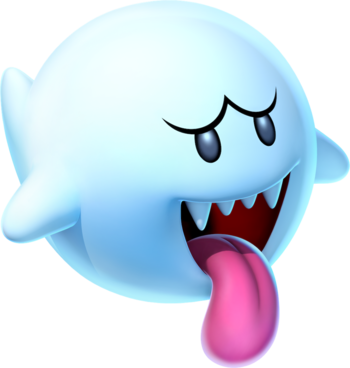 Nasty little blobs of ectoplasm who chase Mario relentlessly. They're painfully bashful, though, and stop moving to cover their faces when anyone looks at them. Debut: Super Mario Bros. 3. 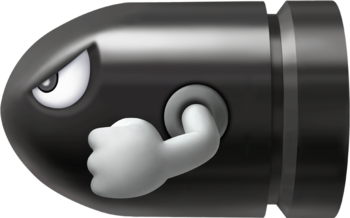 Living artillery that get shot out of cannons. Debut: Super Mario Bros. 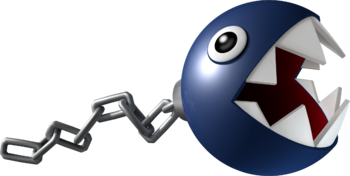 Black orbs with eyes, sharp teeth, usually a chain and not much else. They act like and seem to be the local equivalent of dogs. Unchained ones are often called "Chomps", but not always. Debut: Super Mario Bros. 3. 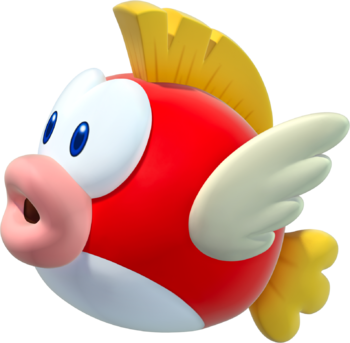 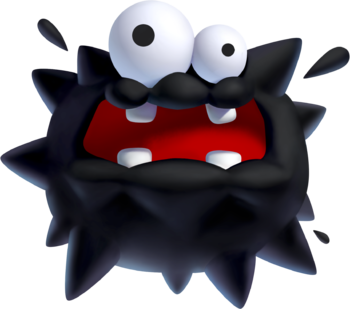 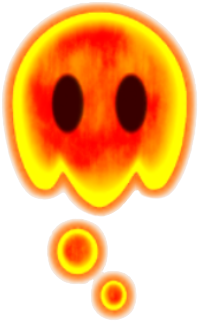 Fireballs that leap out of the lava pits that Bowser so loves. Sometimes called "Podoboos" or, less often, "Sparkies" or "Spark Spooks". Debut: Super Mario Bros. 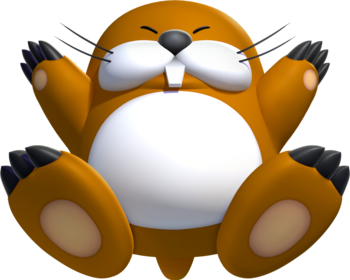 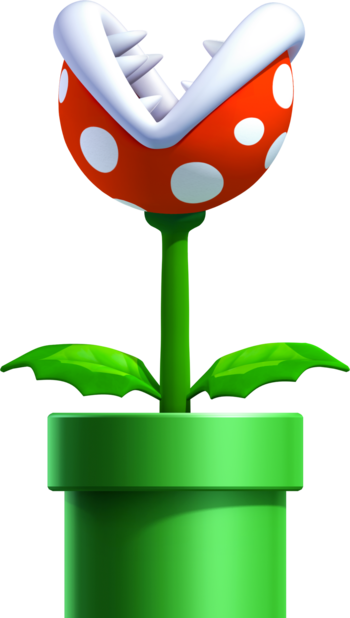 Ambulatory cacti made of round segments and with perpetually happy expressions. Debut: Doki Doki Panic. 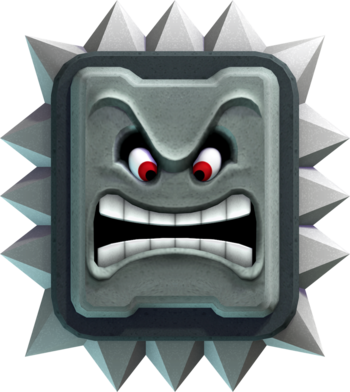 Giant rock creatures lined with thick spikes and with perpetually angry expressions. They drop down to crush enemies and are often positioned in key spots to provide maximum annoyance. Debut: Super Mario Bros. 3. 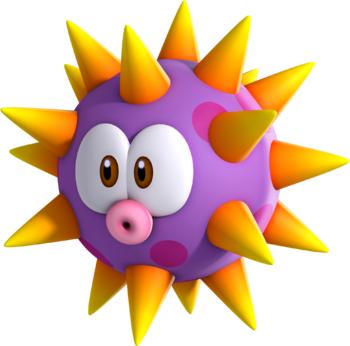 Urchins who move in a pre-set pattern. Despite their limited movement, they are very tough as they can only be defeated with a few methods. In New Super Mario Bros. U, they appear angry when out of water. Debut: Super Mario World. 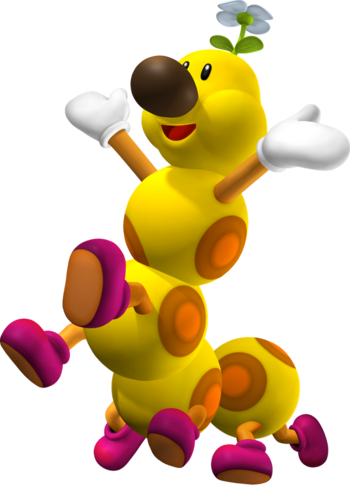 Giant caterpillars with flowers on their heads. When attack, they get mad and become much more aggressive. Debut: Super Mario World.