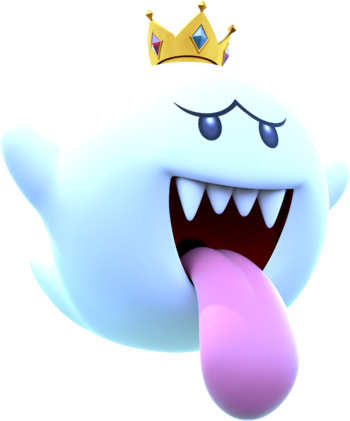 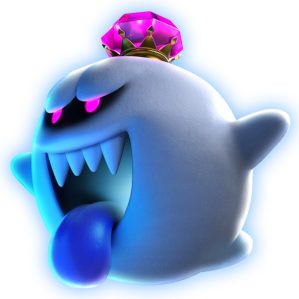 Luigi's Mansion series
"If you hear me laughing, that means you're doomed!"
Debut: Luigi's Mansion
Voiced by: Toru Asakawa (2001-present)

The king of the Boos and primary antagonist of the series.

That scaredy-cat Luigi has made it this far... Oh, we're so frightened! I guess it's our turn, then... All right, Boos, let's assume our real form... But first, how about giving him a little scare!

The Jumbo Ghost. The third boss ghost to fight and the sixteenth Portrait Ghost fight.

Ghosts of the Mansion

The ghosts in Luigi's Mansion.

The most common type of ghost found in the mansion. They come in two other variants: white, fiery Temper Terrors that must be doused with water before they can be caught; and blue, rare Speedy Spirits that dart around the room the moment they're found, and yield tons of treasure if caught.

Tall and skinny ghosts that move in a long, straight line to throw punches. Their white, icy cousins are called Flashes, and can't be caught until you melt their hearts with fire.

Blue Twirlers are large and bulky ghosts that slam the ground to create shockwaves, dealing devastating damage to Luigi. They have a white, watery variation called Blue Blazes, which have to be frozen with ice before they can be caught.

Grabbing Ghosts slowly creep up to Luigi and grapple him. The white ghosts are otherwise harmless, but the red ones squeeze him and deal damage. There are also two invisible, damage-dealing variants: the blue Mirror Ghost, which can only be seen as reflections in mirrors, and purple Cinema Ghosts, which cast shadows from projector lights.

A ghostly variation of Shy Guys. Luigi's flashlight won't stun them until their masks are removed. Dancing Ghost Guys usually move in pairs, and are best caught at the same time if possible.

Ghostly skeletons that toss their own bones at Luigi before falling into a heap on the ground, making them vulnerable.

Ghosts shaped like garbage cans. They are always seen eating bananas and throwing their peels on the ground, which will cause Luigi to slip and lose health if he steps on them.

Ghosts that are usually found in long hallways and corridors, where they drop down from the ceiling. The white Ceiling Surprises don't do anything besides startle Luigi, but their cousins, the Purple Bombers, always drop bombs. They have 0 HP.

Yellow ghosts that roll bowling balls down hallways towards Luigi. They have 0 HP.

Waiter ghosts that exclusively appear in the Dining Room to refill Mr. Luggs's plate if Luigi sucks up his food.

Tiny ghost creatures that are easily popped into Luigi's vaccuum: Mice, which scurry across floors and walls; Bats, which swoop down from the ceiling; Flying Fish, which constantly dart around the air; Sparks, which self-destruct when sucked up or left alone; Shining Ghosts, which Luigi must fire at the moon in the Observatory; and Elemental Ghosts, which start appearing after specific elemental medals are acquired and can be sucked up to grant the Poltergust 3000 elemental abilities.

Ho ho ho ho... Go ahead, try to find me. I can see you, but you cannot see me, ho ho ho ho...
The Bookish Father. The first Portrait Ghost fight.
Lydia

Isn't my hair just gorgeous? Of course, I do spend a lot of time on it. I was so bored cooped up in that painting... Now I spend all my time in front of the mirror. It seems to scare people, though, so everything is coming up roses!

So, you can see me? Well, that may be, but you will never find my weakness!

Ah, the beautiful Melody will not even give me the time of day... What must I do to win her? Passion! Yes! That's it! I will show her I burn for her! My unbridled passion will scorch her soul!

My name is Melody. People call me the spectral beauty of the ivory keys!

The Glutton. The seventh Portrait Ghost fight (and the first optional one).

Look at this buffness! I'm huge! How'd you like to be my punching bag, weakling?

The Body Builder. The tenth Portrait Ghost fight (and optional).

Hey, it's a funny man. Should I play with him?

You want some of this?

The Lonely Poolshark. The thirteenth Portrait Ghost fight (and an optional one).

Hey... Why don't you play hide and seek with us?

Nobody will find me because I'm old, cranky and, by gum, people are afraid of me!

Hermit of the Darkness. The seventeenth Portrait Ghost fight.

Whadda ya think o' me jar collection, then? Pretty amazing, don't you say?

Darn, I love the cold, I mean, I just plain love it!

Eet eez you, no? You interfere with my afterlife's work!

The ghosts that appear in Luigi's Mansion: Dark Moon. 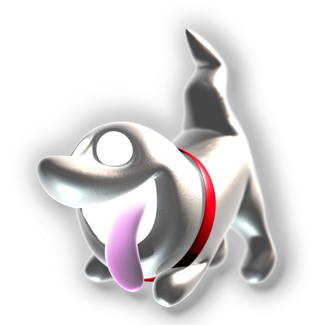 A ghostly dog who just wants someone to play with. Sadly, his antics end up causing trouble for Luigi throughout the game.

Following Dark Moon, he is adopted by Luigi, and acts as his Canine Companion throughout 3.

Former residents/owners of the Haunted Towers, fought in its graveyard. They consist of Sisters Herlinda, Belinda, and Lucinda. While Lucinda is the youngest, her older sisters can't agree on who is the eldest.
Poltergeists

A group of five ghosts capable of possessing another object or being and controlling them. They guard five of the Dark Moon shards and are major bosses in Luigi's Mansion: Dark Moon.
In General
Grouchy Possessor

The one-horned Possessor that takes control of a massive spider in the basement, having its children spread webs all around the Manor.
Harsh Possessor

The two-horned Possessor that lurks in the tree house of the Tower, which is sealed away by a pinwheel gate and great wood door. It fights by possessing a staircase.
Overset Possessor

The three-horned Possessor that hides within the Clockworks's clock tower, hidden behind a clockwork gate. It fights by controlling a clock and sending groups of enemies at you while spinning its hands as a hazard.
Shrewd Possessor

The four-horned Possessor that lurks in the in the Secret Mine's Workshop where he is first seen trying to harass a Fuzzball by throwing bombs at it. When Luigi manages to reach it, it possesses the frozen ground to become an ice monster in an attempt to escape with the Dark Moon piece, causing Luigi to chase it down the pit.
Tough Possessor

The five-horned Possessor and last guardian of the Dark Moon shards. It lurks within the Paranormal Dimension that can only be accessed by using the portal within the Treacherous Mansion. It fights by splitting itself up and possessing multiple suits of armor at once, before taking possession of a massive suit.

The ghosts that appear in Luigi's Mansion 3.

Blue, Casper-like ghosts that haunt the many floors of The Last Resort.
Hammers

Red, large, squared, and brutish, these ghosts are first found in the Hotel Shops floor.
Oozers

Yellow, thin ghosts that love to hide and throw things. These ghosts are first found in the Mezzanine floor.
Slinkers

Purple, lanky creeps that love to stay invisible and attack from behind. These ghosts are first found in the Garden Suites floor.
Trappers

Massive orange ghosts with two tongues that try to catch unfortunate people who cross their paths. They can only be beaten by using both Luigi and Gooigi.

In General
Ghosts found exclusively in the Scare Scraper. They all pack quite a bit of health, so players will have to work together to effectively take them down. 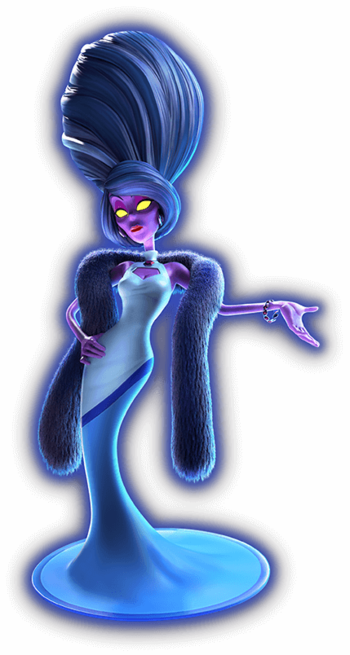 The rich owner of the Last Resort. She invited E. Gadd, and then Luigi and his friends for a stay in her hotel, but it all turned out to be a trap so she could free her idol, King Boo, and dispose of everybody who could get in his way. She's one of the main antagonists in Luigi's Mansion 3, and is eventually fought in the Master Suites, at the final, fifteenth floor.
Steward 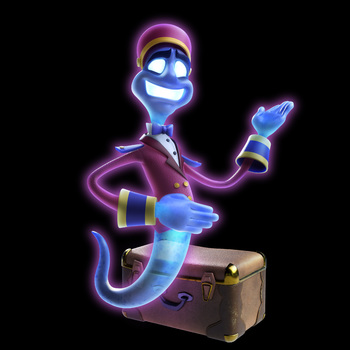 A bellhop/receptionist ghost that is fought at the parking garage in the Basement, where he struggles with some heavy luggage that he later weaponizes against Luigi.
Chambrea 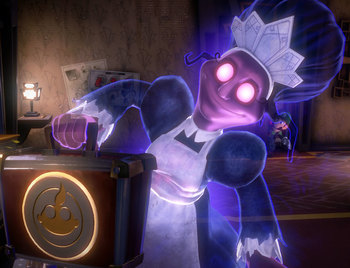 A maid/housekeeper ghost who is fought in the RIP Suites fifth floor. She takes an interest on E. Gadd's briefcase and attempts to escape from Luigi after swallowing it up. 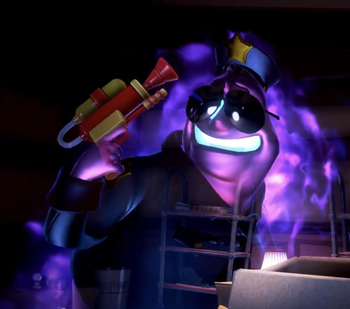 A fat security guard/mall cop ghost who is fought in the Hotel Shops third floor. He loses a key that allows Luigi to explore his floor, and then battles Gooigi with a water pistol he happened to have confiscated in his office. 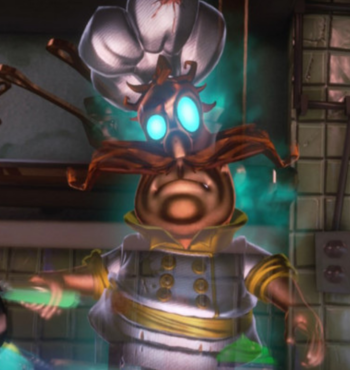 A messy French chef ghost who is fought in the Mezzanine second floor kitchen, after Luigi accidentally makes him drop the food he was cooking. 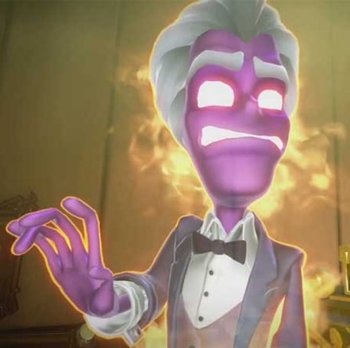 A pianist ghost who is fought in the Great Stage fourth floor by possessing a grand piano. The first ghost that guards a painting as well (in this case, Red Toad). 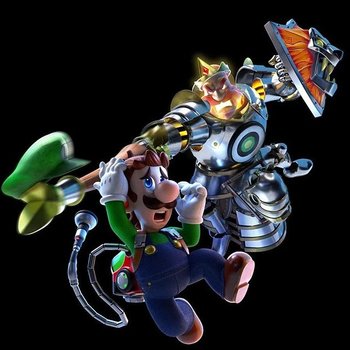 A medieval Scottish king ghost fought in the Castle MacFrights sixth floor. He challenges Luigi to a duel for the seventh floor elevator button. 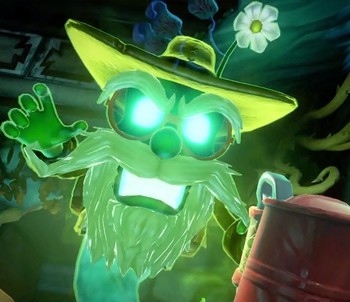 An old botanist ghost fought in the Garden Suites seventh floor. One of his plants ends up eating the eighth elevator button, so he makes it grow gigantic to keep it away from Luigi's reach. 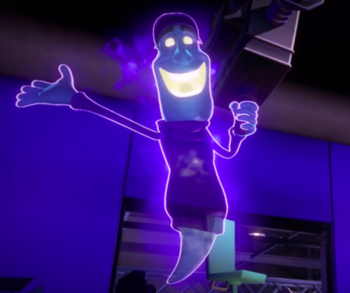 "I didn't notice until now... but you have some nice features! And your build... Not bad! Not bad at all! I see all the makings of a STAR!"
A film director ghost found in the Paranormal Productions eighth floor. He's saddened over his lost megaphone, so it's up to Luigi to search and retrieve it for him so he can obtain the ninth elevator button. Later, Morty shows interest in turning Luigi into the star of his next feature film, where the plumber has to fight a Kaiju costume-wearing Goob in a miniature city filming set.
Ug 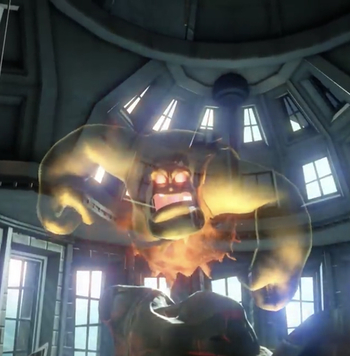 A caveman ghost fought in the Unnatural History Museum ninth floor, where he possesses a T-Rex skeleton. The second ghost to guard a painting (in this case, Blue Toad). 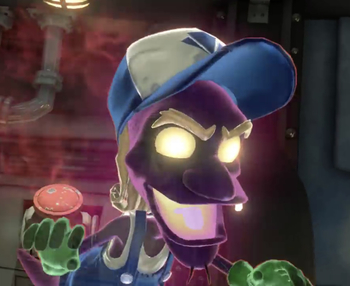 A lazy mechanic ghost who is fought at the Boilerworks, in the second Basement floor. He floods the place up to mess with Luigi and halt his progress. 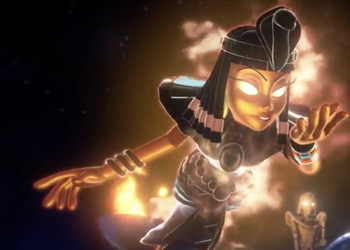 A pharaoh ghost who haunts the Tomb Suites tenth floor. After waking up from her sarcophagus, she manages to make Luigi fall through a trapdoor that sends him into a gauntlet of deadly puzzle rooms. 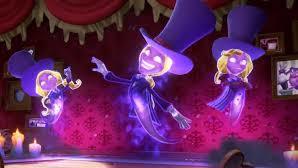 Mischievous, young magician ghost triplets who are fought in the Twisted Suites eleventh floor. They like to bully Luigi with their magic tricks as he progresses through their territory. 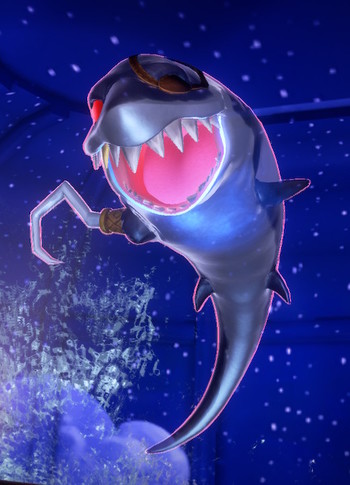 A shark pirate ghost fought in The Spectral Catch twelfth floor, after possessing his own pirate ship. The third ghost to guard a painting (in this case, Yellow Toad). 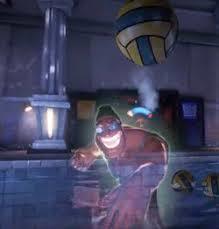 An overly macho swimmer ghost fought in the Fitness Center thirteenth floor. He spends his time playing with volleyballs in an indoor pool while admiring his own physique. 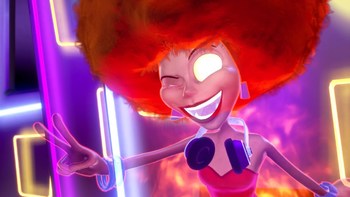 A funky, afro-wearing disco DJ diva ghost fought in the Dance Hall fourteenth floor. She plays for a troupe of breakdancing Goobs who hold the fifteenth elevator button. 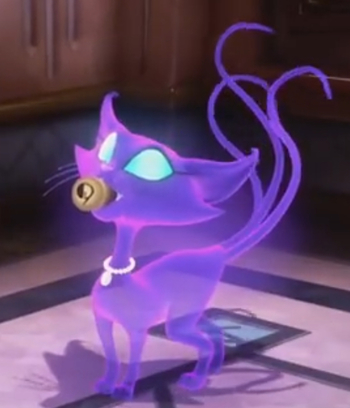 A three-tailed ghost cat. Hellen's pet, and a recurring annoyance who swallows away certain elevator buttons, forcing Luigi to chase after it through previously visited floors. 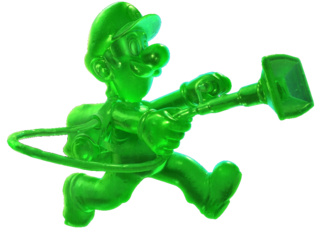 A Blob Monster clone of Luigi who debuts in the Nintendo 3DS remake of the first game. Professor E. Gadd created him during the events of Dark Moon and sent him back in time to his past self for testing. In the remake, he simply serves as the second player in the Co-op mode, but in Luigi's Mansion 3 he takes center stage with Luigi, being integral to puzzles and boss fights in addition to serving as player 2 in local co-op.